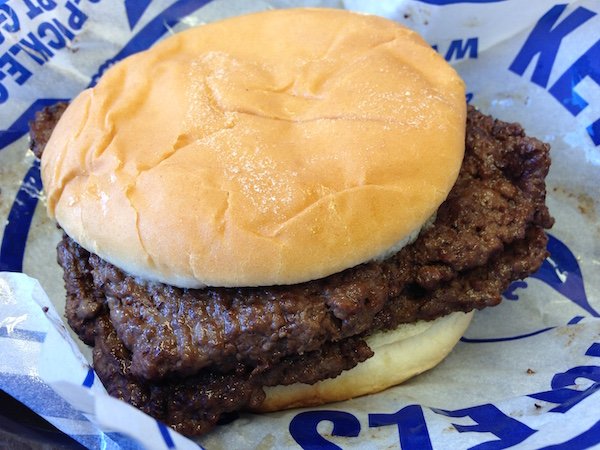 Kewpee Hamburgers is the 2nd oldest Burger Chain in the United States after White Castle. It was founded in 1923, and there are currently 3 in Lima, Ohio (pronounced “Lie-Ma”) and another couple (Lansing, Michigan & Racine, Wisconsin) owned by different folks. The particular KewPee we stopped in at was in Downtown Lima and has been there since 1928.

George Motz said this was the Kewpee to hit up and he was right. It’s full of history and fresh Burgers made from locally raised beef, in other words, just perfect.

The drive was close to two hours but well worth it.; I’d do it again in a heartbeat.

I walked in and just stood around, taking in the place. I had dreamed of one day eating here, and here I was at last. It’s my turn, and without skipping a beat, I ask for a Double w/Cheese, Chili, and a Coke. The guys’ orders include Singles, Fries, and Pies. My one regret is not getting a Malt.

Historically Kewpee is important since Dave Thomas’ (founder of Wendy’s) inspiration for opening a Burger Joint came from frequenting a Kewpee in Michigan. You can notice the similarities in the burger patty shape and thick Malts (which I didn’t have).

The Burgers are freshly ground and pattied daily in-house, which adds to the slightly crumbly nature of the Beef, something I love. I took my time eating my Double w/Cheese and really taking in this experience. We were 18 driving hours away from our home in South Florida and wanted to make sure I made the most of this visit.

I never made it to the Chili as it had cooled off by the time I was done with my burger, yes I took that long. The Kewpee Burger was a classic example of simplicity at its finest. You can keep your fancy dressed up burgers with tons of toppings. Me? I’ll take a Kewpee Burger over all of them.

Plus, you gotta agree with Kewpee Hamburgers’ famous saying: “Hamburg with pickle on top, Makes your heart go flippity-flop”

I certainly do, and it did. Old School At Its Finest: