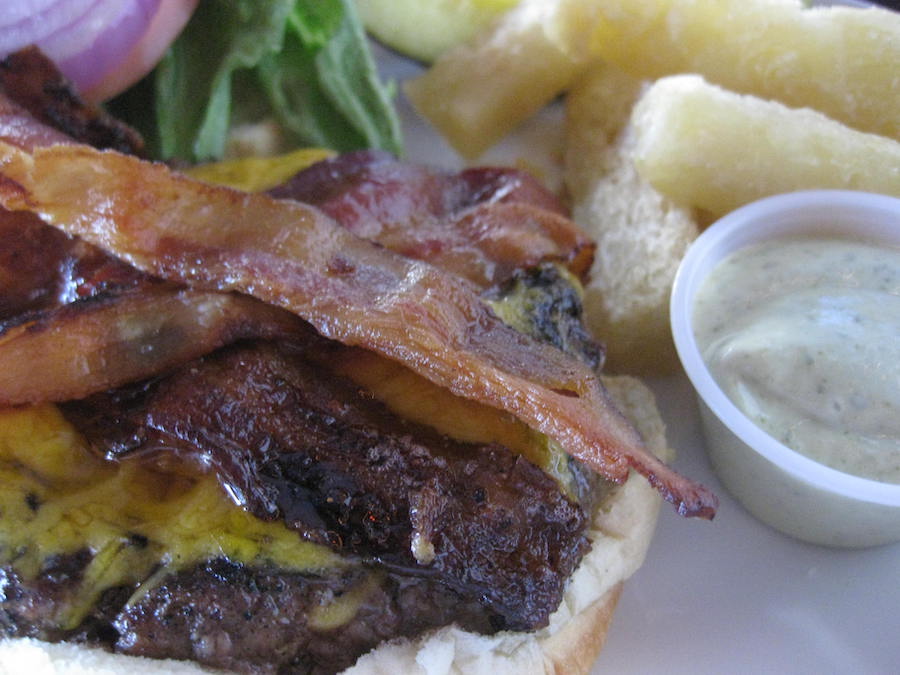 How I ended up here isn’t particularly important. What is essential is that I did. 15th Street Fisheries (1900 SE 15th Street, Fort Lauderdale) is two restaurants in one location.

I walked into the Dockside Cafe, the downstairs portion of the restaurant. Then decided it was too hot to sit outside, and took a seat not too far from the bar.

The truth is that when I met Chef Danny Serfer a few months earlier at Sakya Kitchen, he invited me to 15th Street Fisheries to try his burger. It was an offer I wasn’t about to pass up.

Chef Danny Serfer suggested I start with the jumbo buffalo chicken wings. The fried wings come tossed in the sauce of your choosing.

Danny tossed the wings with a golden mustard buffalo sauce, similar to the one I loved from Quickie’s Burgers & Wings in Hollywood. The wings were fantastic; what a shocker.

What About the 15th Street Fisheries Burger?

The 8-ounce burger is a mix of ground chuck and brisket. There are four kinds of cheese (American, Swiss, cheddar, & blue) to choose from, and don’t think for one second that the idea of having all four didn’t cross my mind.

Even though I could have also added mushrooms, caramelized onions, or bacon to the 8-ouncer, I only chose bacon after selecting cheddar as the cheese.

As good as steak fries sounded, I settled on the yuca fries. The yuca fries were crispy on the outside and fluffy on the inside, good stuff.

The mojo mayo dipping sauce was killer and perfect for them.

The burger was cooked to medium, and the bacon was crispy deliciousness. I was surprised to find such a great burger in a joint known for its seafood, but I’ll take it.

The burger was excellent, and that’s what makes this burger find so freakin’ good!

NOTE: Chef Danny Serfer would open Blue Collar Restaurant less than a year and a half later after 15th Street Fisheries.