Wow! This place is open 24 hours. Royal Castle was part of a mighty chain of sliders that existed in the Southern United States but originated in Miami. This location happened to be one of the later restaurants to open (1956).

The last 2 Royal Castles left in Miami are owned by 2 different people. There is Brimberry’s Royal Castle and this one is owned by Wayne Arnold. This location reopened in early 2009 after a fire 3 years ago that caused it to shut down. Everything is shiny & new at this location (well, the griddle seems to have a lot of flavor going on already).

I ordered their chili, which I was severely disappointed over. I was expecting it to be homemade for some reason. It was served near room temperature and I’m positive that it was Hormel’s.

The fries were ok but seemed to be slightly undercooked. I ordered them with cheese which means I got some nacho cheese over them.

The Burgers/Sliders were great. I liked them a whole lot more than most Sliders I’ve had. I ordered them with Cheese and they had Ketchup, Mustard, Diced Onions, and a Pickle. They are available to purchase individually or in a 6 pack (take a wild guess what I went for). Just an F.Y.I. , I watched them bring fresh batches of patties to cook from the back and they didn’t seem to be frozen.

The funny thing is they serve their own brand of cola called Castle Cola. I, also being a Cola Connoisseur can tell you that it reminds me of a Supermarket brand cola.

You may want to stay away from coming here during peak hours like noon. The cooking space is so small that it’s very easy for them to get overwhelmed with orders. 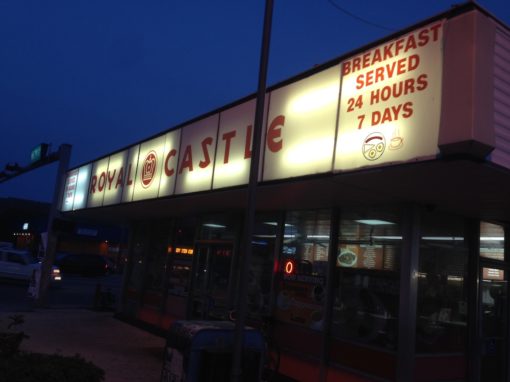 END_OF_DOCUMENT_TOKEN_TO_BE_REPLACED

There is only one Royal Castle Restaurant left from the Miami chain. It’s located at 2700 NW 79th Street and still