One of the first things that cross my mind when I wake up Saturday mornings is that Ortelio Cardenas, aka El Mago de las Fritas, is starting on his weekly masterpieces, ajiaco and chicharrones. Ajiaco is a stew filled with different vegetables and meats. Chicharrones (made from pork belly) are known as pork rinds, but this is not the puffed-up version you see in clear bags at supermarkets.

Quantities on both of these guys are very limited so you need to get with the program (ponerse las pilas) and get here early enough that they’re not sold out of either. What I like to do is arrive right around the 10:30 AM mark when he’s putting the final touches on the two specialties.

I sit at the counter and order a Tortilla Callejera for breakfast. The Tortilla Callejera is an El Mago-style omelet sandwich. Imagine an omelet sandwich with julienne potatoes, onions, ham (optional) and El Mago’s secret sauce mixed right in with the egg before cooking. It’s then placed on a toasted piece of Cuban bread and topped with more crispy potatoes. He might sneak in some ketchup on occasion, and cheese is also another option.

By the time I’m finishing my callejera, the chicharrones have been placed under their heat lamp throne. Life expectancy on these guys is usually a couple of hours which is why you must hurry.

I order a portion of chicharrones to have while I’m waiting for the fritas and ajiaco I’m taking to go. I love these fellas but be very careful when eating them that you don’t crack a tooth. It’s never happened to me but these guys will give your teeth a workout. And yes, they are as good as they look.

Strips of Chicharrones under the heat lamp waiting to be chopped

Chicharrones are a go!

One Saturday I decided to film Saturday’s El Mago adventure. As you will see, it’s a very enjoyable experience.

So…..should I save you a seat for the next one?

El Mago De Las Fritas is located on 8th street in Miami. It’s not the only frita place on 8th

END_OF_DOCUMENT_TOKEN_TO_BE_REPLACED 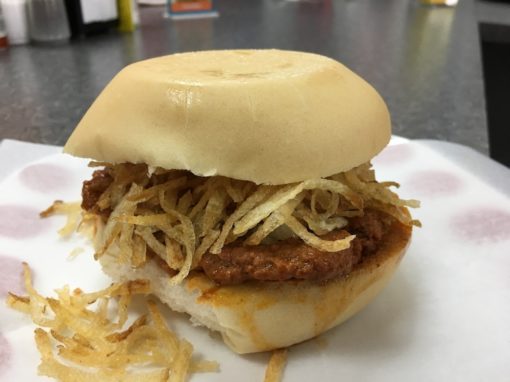 All About The Frita Cubana AKA The Cuban Hamburger

English or Where To Find A Frita Cubana