This is my Top 10 South Florida Hot Dogs list. There are some good dogs to be had so go out and have ’em!

Most Honorable Of Mentions) Arbetter’s (Westchester): I grew up eating Arbetter’s Chili Cheese Dogs, and I don’t feel comfortable excluding them from the Top 10 because there’s the whole nostalgia factor to consider. If I didn’t mention Arbetter’s at all, I’m sure my parent’s neighbors in Westchester would scale a full-on pots & pans assault on me. And we can’t have that. So let’s do this, go to Arbetter’s, order a Chili Cheese Onion Mustard Dog and enjoy supporting a Miami Landmark. It’ll do your soul some good.

10) House Of Dog (NO LONGER OPEN): Should I assume House of Dog named a Dog after a Ninja cause the flavors take you by surprise? Well we know what happens when you assume, remember that time at that party a few years back? Yup, anyways, back to the Dog at hand. The Ninja Dog is topped with Mushrooms, Pineapple, Teriyaki Sauce and Wasabi Mayo. This Hot Dog is so good it makes me want to hide and scare the crap out of somebody….anybody……Ninja-style!

9) Sweet Dogs (Miami): I love Sweet Dog’s Dolphin. No, it’s not made of Dolphin but named after Miami’s famous football franchise and unlike them, this dog’s a winner. ZING! Alright, I’m messing around, don’t kill me. The Dolphin is topped with Grilled Ham, Smoked Bacon, Melted Mozzarella Cheese, Pineapple, their House-made Sauce and way too many of those little potato sticks for my liking (lol). The real question at hand is can you have only one?

8) Sakaya Kitchen (Midtown): Sakaya Kitchen’s got a Hot Dog? It does and it’s named the KDog. Imagine a Nathan’s all beef Dog with Sakaya’s House-made Kimchi Slaw, their House-made Mustard & some Tater Tops lining the top. Now that you’ve imagined it I can tell you the real version tastes better than what you’ve created in your head.

7) Jersey Dawg (NO LONGER OPEN): Jersey Dawg is known for his Rippers and I’m not talking about the gaseous after-effects of a night of eating tacos. Rippers are deep fried Hot Dogs. This style of preparing the dog is a New Jersey staple. I like mine with a little bit of Chili & Cheese, I mean who doesn’t? Don’t forget to add the deli mustard too. And some onions. That’s it, carry on.

6) PS561 (Food Truck): I’m not sure who he is, but Ron must be pretty f’in cool to have PS561 name a Hot Dog after him. The Principal Ron Dog is topped with Goat Cheese, Bacon & BBQ Sauce on a fresh baked roll. You must be thinking, what a weird combination? I thought the same thing till I had one. Now, I wish Ron had been my principal too.

4) BurgerFi (Tons of Places): It seems as if every time I eat at BurgerFi I order a Burger and some of their fresh cut Fries. While enjoying my meal I realize that I forgot to order the Texas Style Chili Cheese Dog, now that is a major mistake. It’s on the level of forgetting to put on a glove when removing something from the oven. Yup, now you get the picture.

3) Hot Diggity Dogs (Dania Beach): I don’t eat Chicago Dogs often but if I’m in the mood, I head to Hot Diggity Dogs & More in Dania Beach. If you’re from Chicago you’ll feel right at home with all the Vienna product and you’ll enjoy some of the best service I’ve had at a Mom & Pop shop in South Florida.

2) HotDogOPolis (Boca Raton): Have you heard of HotDogOpolis’ The Peking? How could you say no to a Hot Dog wrapped in Duck Bacon & topped with Hoisin Sauce, Pineapple Sauce, & Scallions? I certainly couldn’t.

1) Pincho Factory (NO LONGER SELL HOT DOGS): While I’m standing in line to order at Pincho Factory, their Chipotle Dog is always dancing in my head. GET OUT OF MY HEAD! But I can’t so I always order a Chipotle Dog when I’m there. If you see that I don’t, you have my permission to put owner Nedal Ahmad under citizen’s arrest for mental abuse.

Best Of or Lists

END_OF_DOCUMENT_TOKEN_TO_BE_REPLACED 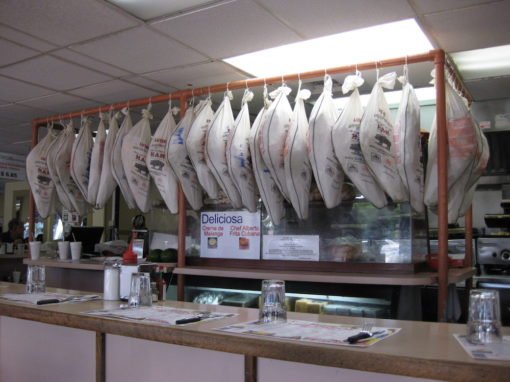 Best Of or Lists, Feature

Here’s a guide to everything you need to know about the different types of Cuban Sandwiches in Miami, Florida.