I was having a conversation with Billy Corben (director of Cocaine Cowboys) about food which is really the only thing we ever talk about. He just “as a matter of fact-ly” mentions great sliders at a joint in the North Miami/North Miami Beach area. He’s never mentioned Sunny Side Cafe in any previous conversation so I think he may have been holding out on me and he let it slip by mistake.

I had just stopped in at the Root Beer Drive-In for a Burger and some housemade Root Beer a few days later and had a little bit of space in my belly that sliders would nicely fit into. It was almost as if my Tahoe was on cruise control so I was on my way with my bud Z.

After a bit of a nightmare parking situation (they’re located next to a market where a truck was making a delivery and blocking a good amount of vehicles), we walk in and take a seat at a two-seater right by the entrance. I’m so close to the front that I could be the doorman. Z asks for a breakfast platter and I ask for the burger, some sliders and a Cafe con Leche (Latte for you non-Miamians). It’s a weird combo but hey…we’re in Miami.

This is a real locals spot with people coming in, ordering their usual and taking it to go or eating in. The waitress was friendly and asked if we needed anything a few times. She didn’t hover or disappear, in other words right on the money.

Z enjoyed his breakfast and it’s typical of what you’d get at a greasy spoon. The burger fell into the same category and isn’t really worth going out of your way for.

Those little sliders with the rough diced onions, a pickle and mustard on Hawaiian Rolls are a different story. There was a reason Billy was keeping this to himself, he was trying to prevent this from getting out to the burger hounds out there. Well, he mentioned it to the wrong guy and this fella can tell ya it’s worth the drive if you’re not in the area. Those of you Royal Castle diehards would love them too but just don’t tell too many people, ok?

END_OF_DOCUMENT_TOKEN_TO_BE_REPLACED 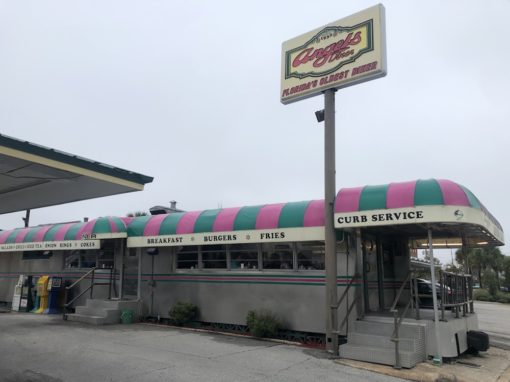 Angel’s Dining Car is the oldest diner in Florida.