I can not even quantify the level of excitement I had when I knew that I’d be eating at Ollie’s Trolley in Louisville.

But before I continue, some background on Ollie’s Trolley:

Ollie’s Trolley was an offshoot brand of the restaurant chain LUMS. Brothers Stuart and Clifford Perlman purchased a 16-seat diner in Miami Beach from its founder Burnett Carvin in 1956. LUMS was known for hot dogs steamed in beer. The brothers would grow LUMS to over 300 locations throughout the United States. After purchasing the Caesars Palace Casino (Las Vegas) in 1969 they turned around and sold LUMS to John Y. Brown in 1971.

The burger from Ollie’s Sandwich Shop (which seated about 20 folks) was brought to his attention in 1971 and he tried the burger and loved it. The owner, Ollie Gleichenhaus was not interested in the multiple attempts by Brown to buy the burger recipe. He even offered to make Ollie more famous than Colonel Sanders. Brown eventually wears him down after continuing to work on his ego and after 37 years of running his shop Ollie closes up. He goes to work on streamlining the 32 spice burger recipe with the LUMS folks.

While this is happening, Brown was working on a totally separate concept that involved a trolley car that would serve take out food only. These trolleys were not very large and could easily be parked in 3 car spaces. At some point, the idea to merge the Ollie Burger with the trolley concept happened.

In early 1973 the first Ollie’s Trolley opened in Louisville, Kentucky and within 3 years there were almost at 100 locations. Unfortunately, the Ollie’s Trolley concept never really caught on. By early 1980s they were rapidly disappearing across the U.S. landscape. 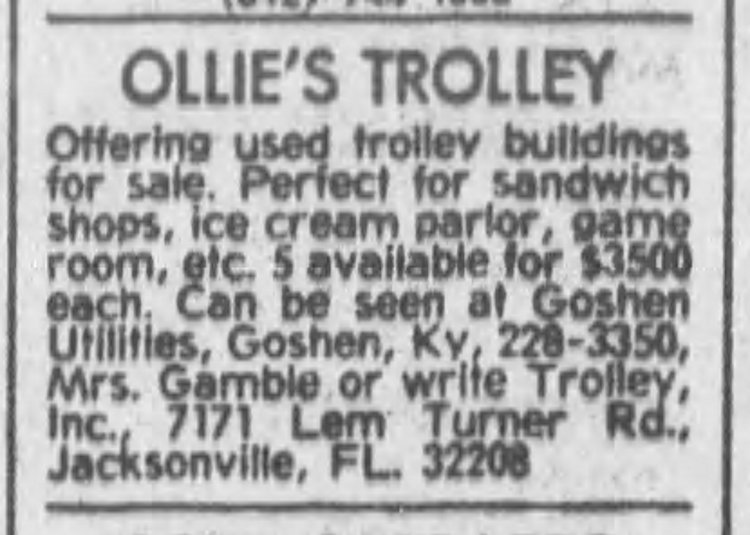 Today there are 3 Ollie’s Trolleys still in operation. The location in Washington D.C. has a larger restaurant-style menu and is the only one of three not to be housed in a trolley but in a corner building. The Cincinnati, Ohio Ollie’s Trolley is indeed still in an original car but the menu features BBQ/Southern comfort food and has outdoor seating. The Louisville, Kentucky spot which also happens to be where Ollie’s Trolley was founded is the closest to the original concept created by LUMS and Ollie.

Now back to your regularly scheduled program:

My friend John was driving our rental car with my wife Marcela in the passenger front seat. Me? I was sitting on the passenger side, middle row of the vehicle. John turned the corner and I remember this clearly in slow motion, seeing the Ollie’s Trolley sitting in that parking lot. It seemed like a mirage to me, something I’ve seen in pictures for years was finally right in front of my eyes. I walked up to it, just stood there and took it all in. I was thinking, who knows if I’ll ever make it back here again.

There were a few folks in line so John and I join them. It’s pretty tight quarters inside with a menu board on the farthest right wall when you step inside. Right next to it was the window where we placed our order and then about 5 or 6 steps to the left is the pickup window. I’d say that tops, 6 or 7 folks fit in there comfortably and that might even be a slight exaggeration.

I get my sack of food and we walk back to our rental.

My thought after the first bite of the Ollie Burger is that there’s a lot going on flavor-wise. It was a larger patty than I expected and I’m pretty sure that this Ollie Sauce was not on the original version of the burger served in Ollie’s Sandwich Shop. My final thoughts on the Ollie Burger is…yes it’s great…yes it’s different…and yes, it’s not for everyone.

I’m always down for some fries with proprietary seasoning sprinkled on them or even just some Lawry’s Seasoned Salt. The fries were highly addictive and went well with the spiced up thousand island-y Ollie’s Sauce.

I never had a chance to eat an Ollie Burger from Ollie’s Sandwich Shop, LUMS or Ollie’s Trolley back in their heydey since I was only a couple of years old when they were at their peak. I did visit the Flashback Diner in Davie, Florida a few years back for an Ollie Burger. They have 3 locations in South Florida but this one, in particular, was the last LUMS open down here which closed in July 2009. The Flashback Diner version of the Ollie Burger was very good but not similar to the one I ate in Lousiville, Kentucky. 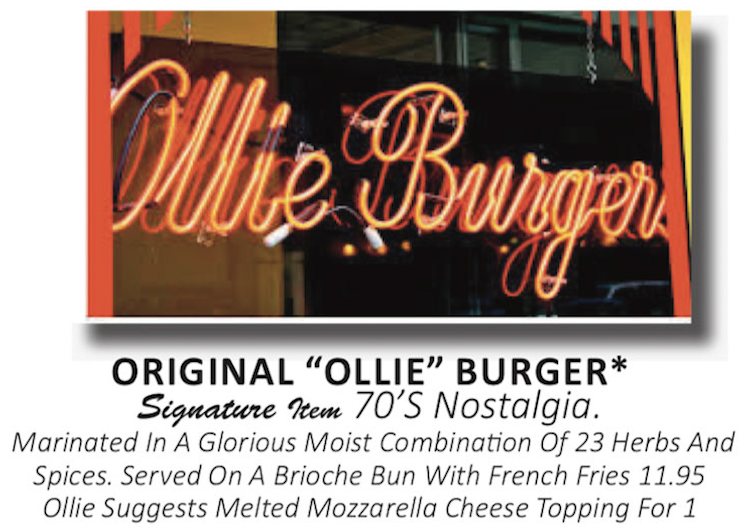 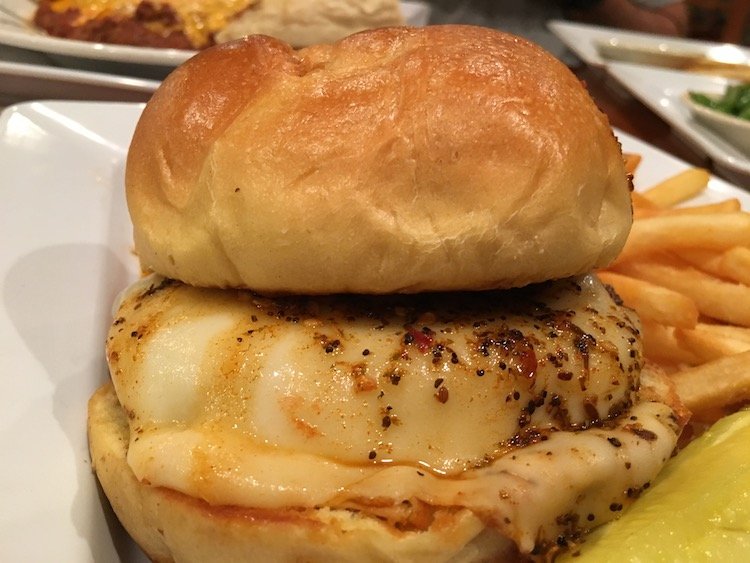 One last important tidbit for those of you who would like to relive your Ollie Burger fantasies and can’t make it to any of the last locations, the Ollie Burger and Ollie Fry Seasoning can be purchased from .

or maybe you want to check out the