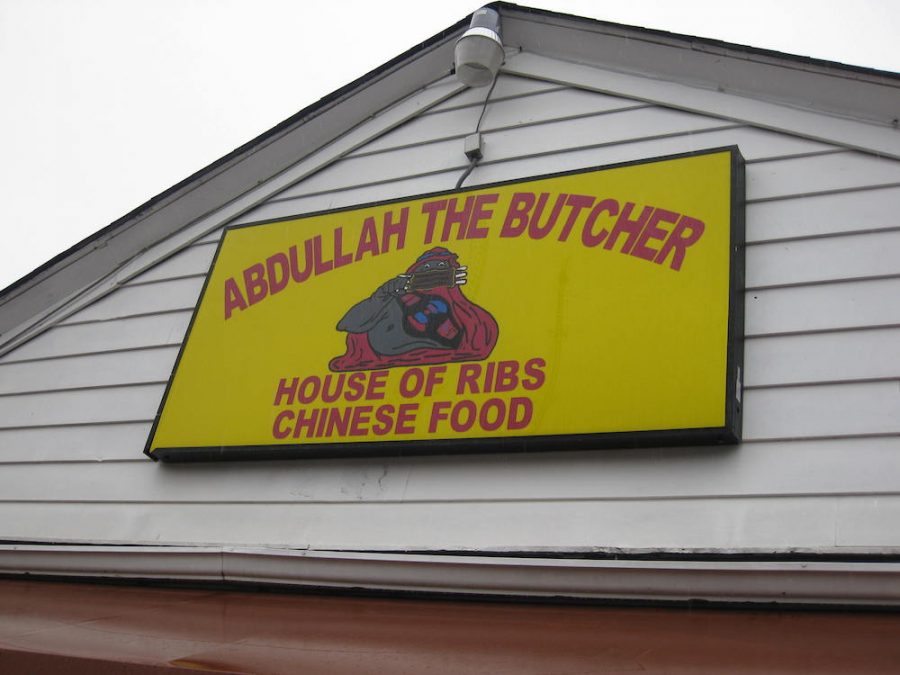 Abdullah was known for being ultra-violent in the ring, and every one of his matches ended up in a bloodbath. I can’t envision being in the ring across from some guy who wants to grab a fork and jam it into my head to make me bleed.

When I found out about Abdullah The Butcher House of Ribs & Chinese Food, I knew I had to check this restaurant out. There are pictures of wrestlers (a whole bunch of them autographed) and a few of his championship belts lining the walls.

My two friends John and Isaac split the whole slab of ribs. I order a Butcher Burger as well as a chili dog. We get some wings also, served hot with fries.

The ribs were excellent, and the BBQ sauce was outstanding. The guys seemed to enjoy the ribs as well as the wings/fries too. Just when I thought I would get my Butcher Burger, I’m told they are out of burgers. They sub my burger for two more chili dogs, which my buds inherit.

I liked the chili dog even though I’m not a big fan of beans in my chili. We all agreed that the wings were the best thing we ate. These things were hot, so much so that I was turning as red as some guy’s chest that Abdullah had just chopped.

Those wings killed me.

I wanted to get a picture of the sign outside, but it was raining. I tell my friend John to wait up, “I’m gonna take out the camera quick and snap a pic of the sign.”

Then I hear, “Why don’t you just take a picture of me?” When I turn and look; my eyes are not deceiving me, it’s Abdullah The Butcher!

It turns out Abdullah is a pretty cool dude, but you better be nice if you don’t want to get your head bitten.

Don’t Get Bitten, Eat At:

Abdullah The Butcher House of Ribs & Chinese Food is CLOSED