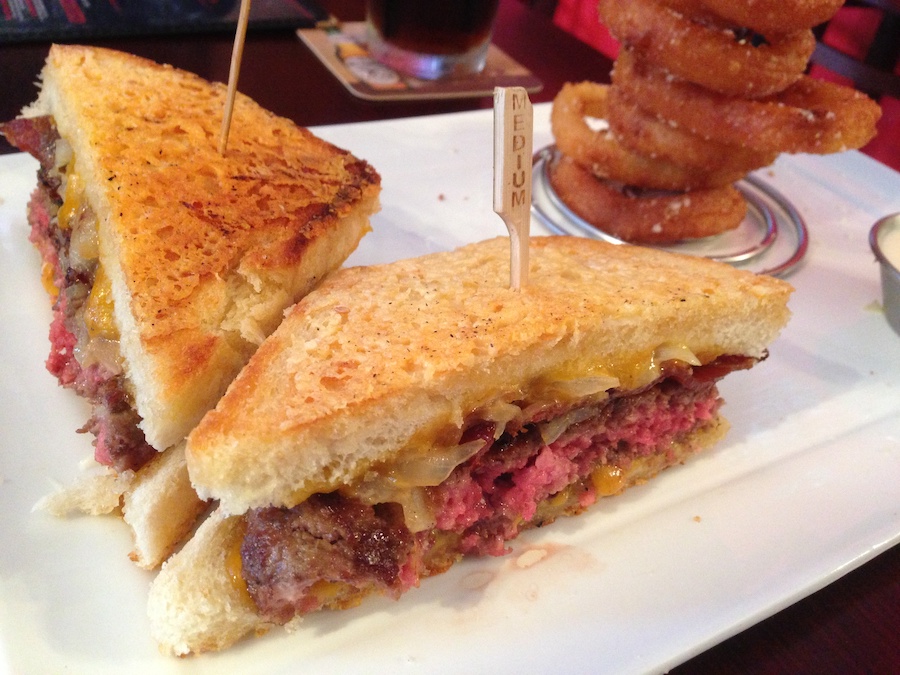 I was a giant fan of A&G Burger Joint. It was South Florida’s best-kept comfort food secret tucked away in Sweetwater. A&G Burger Joint had a short run (about a year and a half) that is still memorable today.

On July 5th, 2014, A&G Burger Joint’s Instagram account announced they were re-locating in November of that year. It never came to pass, but the following year in June of 2015, Chef Alex Parra took over the kitchen at Swensen’s in Coral Gables.

He brought many popular dishes from A&G, including the Burger Melt, the Nica Burger, the chicken tenders, chicken wings, and the onion ring tower. Those dishes are still on the menu at the One on Sunset, which recently took over the old Swensen’s spot.

April 11th, 2013 – Sweetwater isn’t exactly known for its burgeoning food scene, but it is the Fritanga capital of South Florida. Right on its border to Westchester near F.I.U., you can find A&G Burger Joint (646 SW 109th Avenue, Sweetwater) with its giant burger menu and excellent craft beer selection.

A&G Burger Joint opened up in late December of 2012, and I’ve probably been here a good ten to twelve times since.

The buns they were using have changed, so, for example, the Nacho Burger may not look exactly like this. The Nacho Burger should be described as an explosion of flavors.

They recently switched to Martin’s Big Marty Rolls, which I love. Almost 20 Burger creations on the menu range from a Juicy Lucy (stuffed with cheese) to the 5:0 Burger (donuts as buns). You can, of course, create your own (B.Y.O.B.) from all the toppings and ingredients. There’s even bison, turkey & veggie as protein options.

Get That Burger Melt

I’m a big Patty Melt fan, and if I get the clue that there’s something similar on a menu, I always go for it. Their burger melt with parmesan-crusted bread is a beauty. Of course, I added some applewood smoked bacon to the equation. If you can’t decide what to order, I suggest you start with this.

Choosing your side is difficult with all the options available. I’ve tried them and lean towards the truffle fries or onion rings. They recently added chili cheese fries, which are another great choice if you’re sharing; it’s a large portion.

Dipping sauces play a big part in the side world here at A&G Burger Joint. The savory creole mustard is my hands-down favorite. It is so good I dip my napkins in it, just kidding.

The honey mustard is a close second for me. Marcela loves the kalamata garlic aioli sauce.

If you come here on an empty stomach, I suggest starting with either their garlic buffalo tenders (double hand-battered) or the fire buffalo wings. The wings have to be some of the best in the city.

There’s no skimping here as they’re meaty and sauced up just right. The fire sauce has the right amount of heat, so you won’t be sweating as if you just ran a marathon.

My love for their tenders turned me onto their buffalo chicken sandwich. I opted out of the veggies but added a slab of queso frito (Nicaraguan-style salty fried cheese). But, hey, we’re in Sweetwater, and I do as the Nicaraguans do. You must have this if you’re into the whole spicy, sweet, and salty combo.

You can close out your meal with a cafecito (which I always do) and a dessert. There are two options here, brownie explosion or banana split. I’ve withheld the picture of the brownie explosion because it’s something that needs to be experienced, much like A&G Burger Joint.

December 14th, 2013 – Chef-owner Alex Parra will be opening A&G Burger Joint in Sweetwater next Saturday, December 22nd, at 7 PM. There are a few things I like about this place already.

First, they’re opening at 9 AM and serving breakfast, which means possible burgers. Second, some appetizers like wings and sandwiches like buffalo chicken if you’re not having a burger kinda day.

And for you beer folk, there will be a good selection of imported, domestic, and craft beers.

Everything, including the sauces, is made in-house. You can choose from one of their burger creations or go the Build Your Own Burger route.

Even the sweet potato fries have something going on; they’re served with a maple cream sauce. And yes, there’s to-go, delivery, and even 15% off for F.I.U. students, police officers, and firefighters.

I Miss These Spots