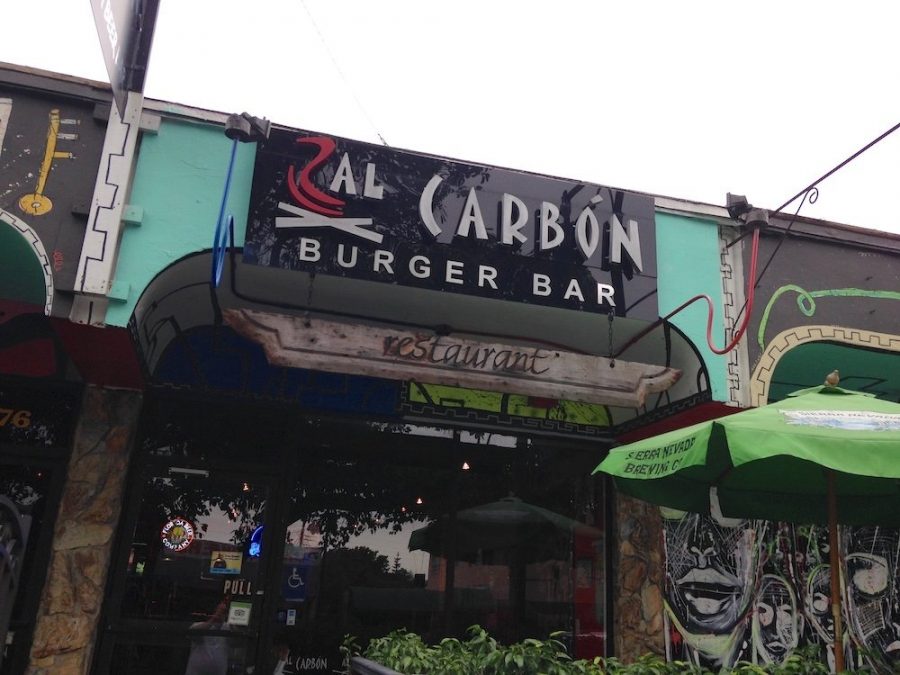 Since 2005, Al Carbon Burger & Craft Beer Bar has pleased its cult fans with their chargrilled stuffed burgers and Colombian-inspired cuisine. All the meats are cooked on charcoal hence the name Al Carbon.

Al Carbon (2280 Coral Way, Miami) has re-invented itself a couple of times, and I love its current incarnation. It’s now a stuffed burger (Juicy Lucy to burger fans) and craft beer bar that serves some crowd-pleasing Colombian dishes.

I was stand-offish on its burgers when I first tried them years ago. Now I think their Hawaiian and Blue cheese-stuffed burgers should be in the Juicy Lucy hall of fame. Share a beef empanada while you’re there, and don’t skip out on those little yellow potatoes; they’re highly addictive.

My first visit to Al Carbon was way back in 2009, which I documented. Scroll below to read it if you absolutely must.

May 13th, 2009 – Another Colombian Fast Food Joint? I had sworn off all Comida Rapida spots after the debacle that is Que Perros, plus I pissed some dude off enough with my comments that he left a near unreadable retort worth checking out alone.

So after some convincing from a few online friends, I decided to give it a go.

I’ve driven past this place a half dozen times and not gone in because it was packed. My wife Marcela and I decided to go on a Monday night for dinner, and it wasn’t too bad. It looks pretty cool inside with cowhide on the wall and a nice-looking bar.

Potatoes to start the meal?

We decide on salchipapas and the papa asada (con salsa de queso) as our starters. A salchipapa is a dish with hot dogs or smoked sausage slivers with french fries.

I had never eaten salchipapas before. It was good for what it was, but it seemed like it needed something else, possibly a sauce.

We couldn’t quite place our fingers on what was in the sauce. But unfortunately, it didn’t have an overpowering taste, and after trying to figure out what it was for a few minutes, we gave up.

Marcela asked the waitress, and it turned out that she didn’t know. The kitchen tells us it’s cream cheese with different spices, which is interesting.

Marcela and I split two things, the Hawaiian burger and a caramelized onions and blue cheese hot dog. There are a few things near the top of my least favorite toppings; pineapple and coleslaw are them.

The hot dog was solid. Unfortunately, the slaw’s placement under the charred dog made it a non-factor. But I was ok with that. Next time, I would go for a different flavor combination.

Now the Hawaiian Burger I loved. The burger was stuffed with pineapple and Swiss cheese, and it tasted pretty amazing. However, I’m not sure this burger will appeal to the masses because of the seasoned meat.

The roll used for the burgers is fluffy. They are near perfect for a burger, plus it has some branding on them; a nice touch. The good thing is they deliver, and since I’m not too far from there, I may take them up on that offer.