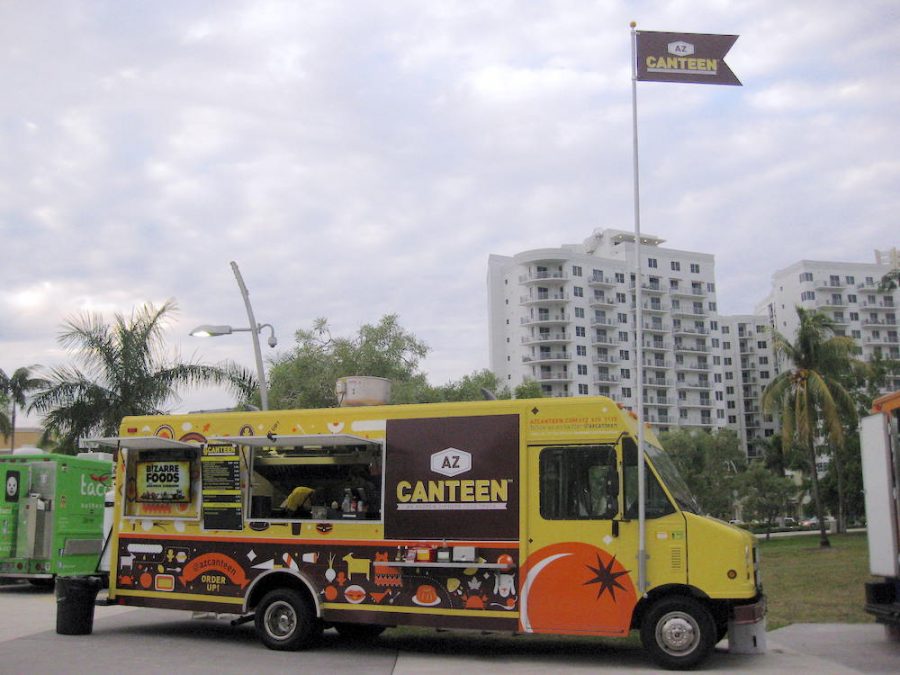 During the years 2011, 2012, and 2013 South Florida was a hotbed of food truck activity. I was hosting or curating near twenty food truck events in Miami-Dade and Broward counties.

In October 2011, the South Beach Wine & Food Festival announced Food Trucks on the Beach as the closing event for their 2012 season. I was hired to help curate the food trucks for the event hosted by Andrew Zimmern.

Not too long after the event, I was contacted by Andrew Zimmern’s people about their new project. The top-secret AZ Canteen food truck would be making its debut at some point during the late summer then heading to South Florida.

It would then stay down here with us for a few months until Andrew’s hosting gig at Trucks on Midtown’s Tracks. After that, it was headed back to Minneapolis. I was then enlisted to help out, guide, and educate the AZ Canteen team about the truck scene down here.

Their introduction to South Florida foodies was at my event in Hollywood, Florida. I believe they attended one of my events in Immokalee, Florida, and participated at my Top Turkey Thanksgiving event at the Seminole Hard Rock, amongst others.

Shortly after the Sobe closing party, they had one last hurrah at Food Trucks at Arts Park. While I don’t think the food truck is around anymore, the AZ Canteen lives on as multiple concession stands at a handful of Minnesota stadiums.

I have compiled all of the posts about the AZ Canteen from my website below for the sake of making all of our lives easier.

August 28th, 2012 – Andrew Zimmern’s AZ Canteen made its first appearance this past weekend at the Minnesota State Fair. It’s kinda odd he would choose to introduce the truck to the public there since carny food is probably one of the worst things people associate with food trucks. Check out the menu and ingredients (straight from their website):

From our singular cabrito sausage and sliders — custom-blended for AZ Canteen by Pat LaFrieda Meat Purveyors — to our signature IZZY’s ice cream sandwiches, we’re thrilled to serve some of our favorite food items.

Some stellar ingredients and interesting-sounding food on the truck make me wonder what the food costs & prices must be. It was very cool to see that his visit to Raspado Loly’s in Sweetwater made such an impression that he added a tribute dessert.

The rumor is the truck will be touring the country, and since he hosted the SoBe Food & Wine Festival’s Trucks on the Beach this year, it would make sense we would be one of the stops. I would pencil in February 2013 for a visit if I were you.

Andrew Zimmern’s AZ Canteen will be in Miami for November

October 1st, 2012 – Good News! Andrew Zimmern’s AZ Canteen will be arriving in Miami for a few months doing a food truck tour of duty in South Florida beginning in November. The schedule has not been revealed yet, but I’ll keep you posted.

To check out the menu, re-read (yes, I’m assuming you already saw it) my post from August about the AZ Canteen.

October 24th, 2012 – Have you been waiting for the AZ Canteen? Well, wait no more as Andrew Zimmern’s AZ Canteen will make its South Florida debut at the food truck event I curate every Monday Night, Food Trucks at ArtsPark in Hollywood. Mark November 5th on your calendar for its first appearance down here!

Make sure you check out the AZ Canteen Menu, so you’ll know what to order.

Please don’t be holding up the line.

February 24th, 2013 – Andrew Zimmern would host his second South Beach Wine & Food Festival food truck event, this time at Midtown near Miami’s Design District. AZ Canteen participated in Trucks at Midtown’s Tracks but was not eligible for the competition portion.

They did, however, serve a killer hot dog made with Pat LaFrieda beef.

March 11th, 2013 – That’s right, you read correctly, Andrew Zimmern’s AZ Canteen is heading back North. Tonight is the night to come out and enjoy AZ Canteen one last time before their long drive home. That’s the way Andrew would have wanted it.