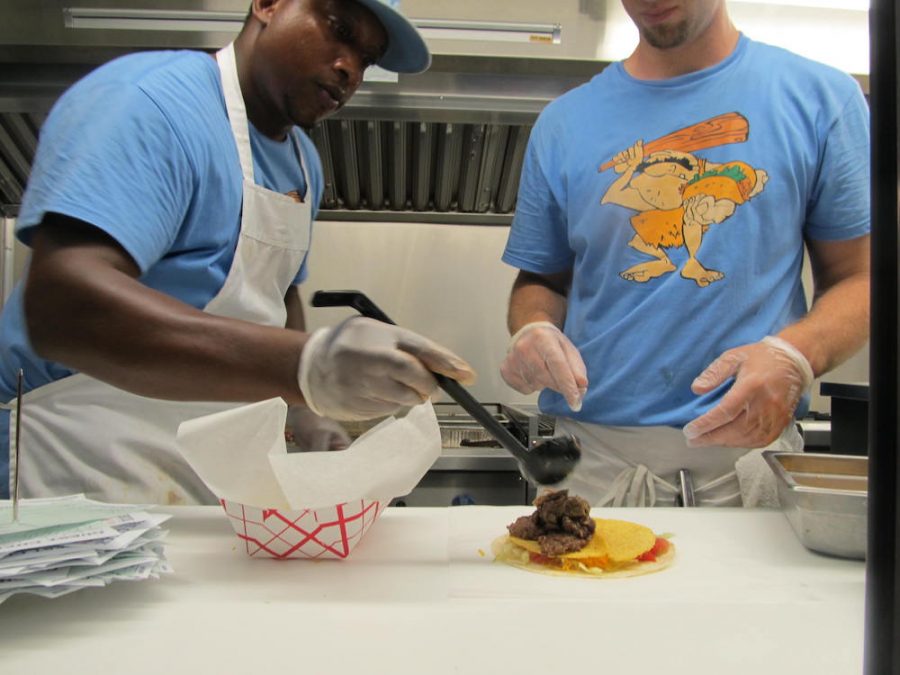 It was also the same day I met the head caveman, Brett Chiavari.

My first thoughts were, these guys got the whole great food with great branding in the bag. At this point in the South Florida food truck industry, folks who had the entire package were beginning to dwindle. So, of course, it was great to see this well-thought-out brand.

Three years later, he would open the BC Cafe in Davie, Florida, which is still going strong today. The BC Tacos food truck can still be found today in Broward & Palm Beach County, with Miami-Dade visits sprinkled in between serving its unique and tasty menu.

BC Cafe in Davie, Florida

July 18th, 2014 – You have to love how Brett Chiavari, the proud papa of the BC Tacos, can keep the caveman theme running throughout his businesses, including the tip jar.

If you’re not familiar with the BC Tacos Food Truck empire, they’ve won multiple awards, including the People’s Choice Best Food Truck at my 2014 Burger Beast Burgie Awards. BC Tacos is known for creative tacos and names that stay within their caveman theme (as mentioned earlier)—the cafe expands on the food truck menu with burgers, salads, wraps, and even breakfast.

The first time I stopped in, I had the Bacon Cheddar Onion Specialty Burger & their regular burger with cheese. So, let’s get to the point, skip the common and go straight for a bacon cheddar onion burger.

I’m thinking about adding a slice of cheese on top next time; what the hell, right?

The second visit was for breakfast. I may have titled the picture a Turkey Bacon, Egg, & Cheese Breakfast Burrito, but it’s a quesadilla in my heart of hearts. Again, we can agree to disagree, but it was as my friends Bill S. Preston Esquire, and Ted “Theodore” Logan would say, “Excellent!”

Another winner was the Steak, Egg & Cheese Taco on a flour tortilla.

I finally made it out to one of their themed nights, this one being the National Hamburger Month edition of their burger Night (every 3rd Saturday), and they loaded it up real nicely. I was with my neighbor Mario, so we ordered 3 Burgers to share along with fries, sweet potato fries & tortilla chips with salsa.

Back to the Fries for a second; you’re now able to go half order of regular and half order of sweet, so keep that in mind. If you’ve shared an odd amount of items with friends, you become territorial over one of them.

In my case, I was protecting the Fred Burger (topped with braised beef short rib & mozzarella) as if it was a virgin in a jail full of nymphomaniacs. Mario’s eyes kept wandering towards my Fred Burger, but at the same time, he was enamored with his Breakfast Burger (topped with cheese, sweet potato pancake, bacon, fried egg on challah bread, and French toast buns).

We also had the Korean Burger (Korean marinated beef, housemade kimchee, grilled scallions, spicy mayo, and a fried egg) situated between us, which we used as the dividing line. You really couldn’t go wrong with either of the three, but no disrespect intended; keep your eyes off my Fred Burger.

Suppose you’re a fan of the B.C. Tacos, you’ll love what’s happening at the cafe. There is something for everyone on the menu, including PAC Pastries, who make their Vegan Desserts for B.C. Cafe.

Yes, they’re vegan, and they’re great. And yes, I did say that.

May 19th, 2011 – BC Tacos can typically be found in Broward County but occasionally visit Miami. All of the tacos on the BC Tacos food truck have catchy names.

One interesting thing to note is that only hard corn or soft flour tortillas are available.

One of their specialties is the over-the-top Caveman Taco which involves tons of meat and hard and soft tacos. It’s as good as it sounds. Another great one to check out is The Gatherer, which features fried avocado.