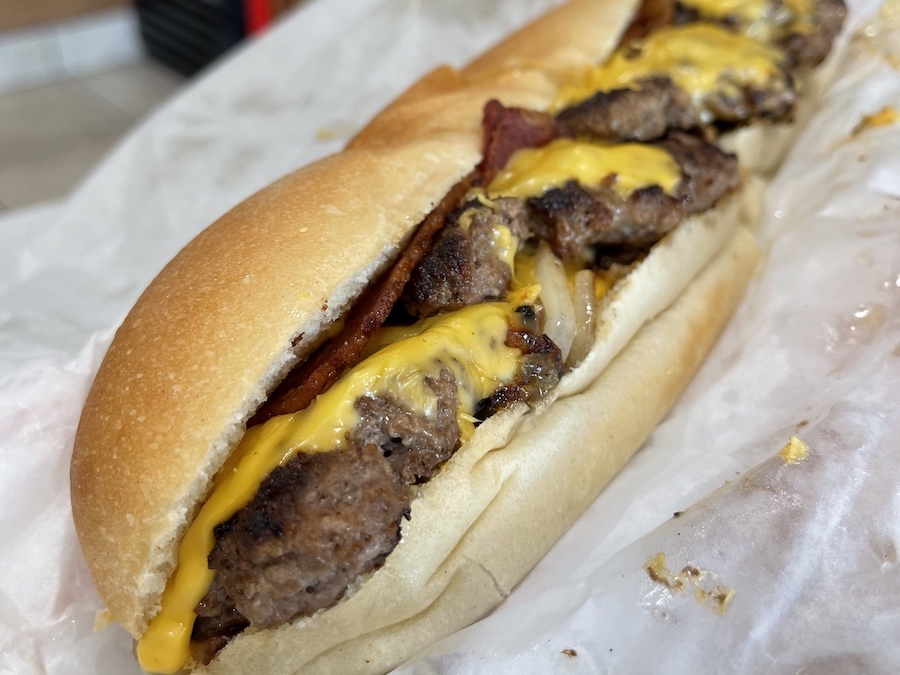 After I was asked about the burger sub from Substantial Subs in Miami Gardens, I thought a Best Burger Sub list might be in order. But, unfortunately, it’s been years since I’ve been to a Substantial.

I remember it mostly from its 1980s and 1990s heyday all around Miami.

Once upon a time, my dad owned a Wise potato chips route. His distribution area was Doral, Hialeah, Medley, Miami Springs, and Virginia Gardens markets and restaurants.

Substantial Sub’s first location was in Virginia Gardens, and my pops sold chips to them. This was during the mid-1980s, and I remember their expansion. Two were in my hometown of Westchester 107th & 16th Street and 98th & Bird Road.

The couple who owned the shops would eventually divorce and split the stores into separate businesses: Substantial Subs and Subrageous. There are still three Subrageous (Cutler Bay, FIU, and Virginia Gardens) and one Substantial (Miami Gardens) restaurant in South Florida.

These kinda stories are more common than you might think in the restaurant industry. I mean, did you know El Mago initially worked for his brother-in-law El Rey de las Fritas?

Why Best Burger Subs in Miami?

The reality is that this list really should be the Best Cheeseburger Subs, not burgers. However, most folks ask me about burger subs as if cheese was a given, which it is, and if it isn’t, it should be.

I would have loved to contain the list to strictly Miami, but the truth is that Broward has the edge in great burger subs, as you’ll see. In addition, all three of my Broward choices use fresh beef burgers for their heroes, giving them the flavor upper hand.

The Miami folks who made my list seasoned their patties well, giving them an edge over their other local burger sub counterparts. I added bacon in some instances but mostly stuck to only American cheese and the fast food holy trinity of ketchup, yellow mustard, and mayo.

This list can be updated any time, so check back or suggest somewhere I might have missed in the comments. Also, a chopped cheese is not a cheeseburger sub so you won’t find any on here.

When Hangry Al’s Sub Shop (16606 Sheridan St, Pembroke Pines) was located in Kendall years ago, they made their burger sub with frozen patties. Since their move to Pines, they’re now on the fresh beef bandwagon.

The half-pound cheeseburger sub comes standard with American cheese, mushrooms, and grilled onions. I felt frisky, so bacon and the sauce trinity also found their way into the grinder.

It looks pretty phenomenal, and that’s cause it is freaking delicious.

What could make me drive South for almost 40 minutes? A visit to Hoagie Bear Subs (26855 S Dixie Highway, Naranja) for a bacon cheeseburger sub.

The grill was covered in sizzling bacon when I walked into Hoagie Bear. After scooting around some of the piggies, my two burger patties cooked amongst them.

The burgers are seasoned after the flip and cut in half for their final destination. The addition of freshly made bacon was a no-brainer.

This puppy was nicely loaded with American cheese, grilled onions, the aforementioned crispy bacon, and the three sauces that tie the sub together. I left Hoagie Bar a happy camper.

Here’s a good one for you, the cheeseburger sub from North South Grill (154 S Flamingo Rd, Pembroke Pines). It might not be listed on the menu, but it exists!

It’s a big sub like the one from Hangry Al’s. My only suggestion is you leave some room for their killer fresh-cut fries; what a winning combo.

Of all the folks on this list, Sonny’s Famous Steak Hogies (1857 N 66th Avenue, Hollywood) is the only one that bakes its rolls. You add that they’re using fresh beef burger patties, and you’ve got a big winner.

This was the one occasion where I skipped on the sauce. The grilled onions were a little overdone, but they tasted fine, contrary to their looks.

White American cheese rounded out the cheeseburger hogie from Sonny’s. Next time we add sauces and change the cheese to Provolone, I feel good about that idea.

I’ve been eating Super Subs Etc (6380 Bird Road, Miami) cheeseburger subs since 1995. How can I possibly remember that? I was a member of the original staff from the Best Buy on Bird Road.

One of the fellas who worked with me in the media department suggested we go eat some subs. He didn’t have a car, so I drove both of us to Super Subs Etc. for lunch.

I first thought this is the same strip mall where Sunshine Comics was in the 1980s. The second and most important thought was, damn is this good.

It was more than good; it was great. Super Sub Etc. is my go-to sub shop in Miami since that first visit. Hungry Bear in Doral is a close second, which I only bring this up cause they have the same founder.

There is magic in that seasoned grill. Of course, nowadays, I’m more likely to order a cheesesteak at Super Subs. But, when I go the cheeseburger sub route, it takes me to that day in April 1995 when cheeseburger subs first became a thing for me.