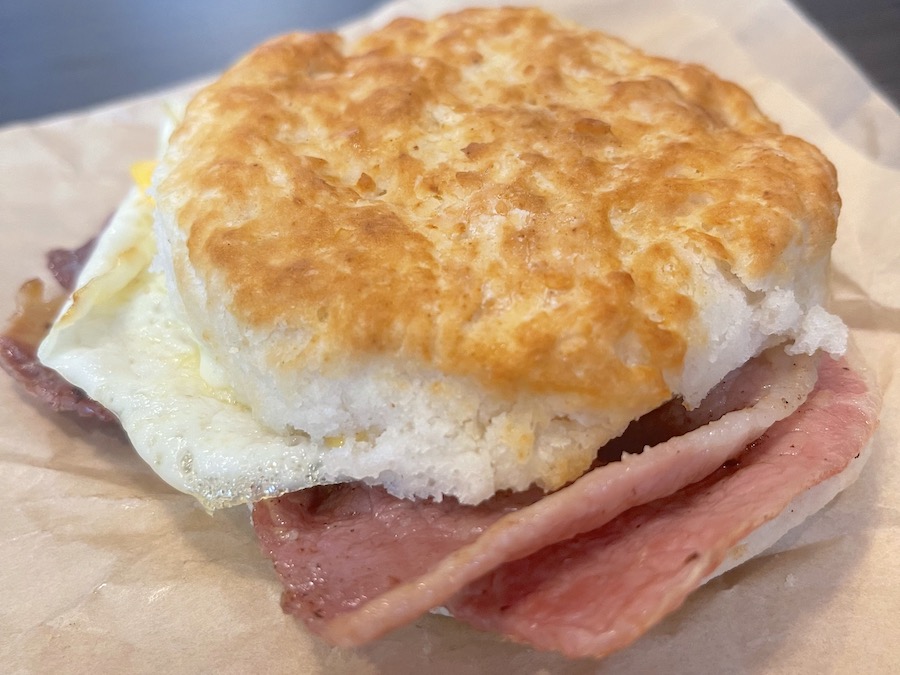 Anthony (owner of Jacksonville’s Carolina Jax) threatened to disown me if I didn’t eat at *Biscuitville when we were in Fayetteville, North Carolina. The nearest Biscuitville location to my hotel was in Cameron (1608 NC-87 S), so Chunktronics and I were off for the first hearty breakfast of this 27-day road trip.

It was a brand location in what appears to be a newly developed area. We had checked out the menu online the night before, so we had a general idea of what we were gonna order.

Biscuitville is very big on using locally sourced (North Carolina) products. After all, they were founded in the Tar Heel State. The Flavor of Local poster says it all.

We had to refocus our attention on placing our order since we got caught up watching them prep biscuits made fresh every fifteen minutes. Luckily, there was no one in line behind us.

Chunktronics and I agree to share aka the ol’ divide and conquer technique. The chicken biscuit, steak biscuit, potato wedges, hashbrowns, some dipping sauces, a cinnamon roll, and finally, the Ultimate Country Ham Biscuit.

We were in an ideal scenario where I’m pretty sure anything placed in a Biscuitville biscuit would be elevated. Well, maybe except for their gravy which didn’t do it for either of us.

I usually humor Anthony since he doesn’t know what the ingredients in an authentic patty melt are, but on this occasion, he was right on the money about the Ultimate Country Ham Biscuit. The UCHB has a couple of slices of country ham, egg, and American cheese on one of their stellar freshly baked biscuits; what’s not to love?

I Almost Forgot About the Pimento Cheese Biscuit

The cinnamon roll ended up being a solo Chunktronics mission. Just as we got to the dessert portion of our meal, he reminded me about the pimento cheese biscuit.

I hadn’t seen it on the menu, and after the biscuit baking distraction, I forgot to ask about it. There was a manager touching tables and asking everyone about their food and experience; just the right guy to ask.

A pimento cheese biscuit was on the menu, and we were on like Dig Dug. You probably expected me to say Donkey Kong, but I was always way better at Dig Dug.

I will not unseat the Ultimate Country Ham Biscuit as the best sando we ate from Biscuitville but damn if this pimento cheese & egg biscuit isn’t the closest second in recorded history.

The best part is it was spicy with diced pieces of jalapeños. We swore we’d return to Biscuitville before leaving North Carolina; unfortunately, we never did.

Biscuitville did, however, give rise to a catchphrase we used throughout the road trip. Chunktronics and I would scream, “BISCUIT” when it was time to eat.

And now that I think about it, BISCUIT!!!

*Biscuitville was named one of the Best Regional Fast Food Chains by USA Today.