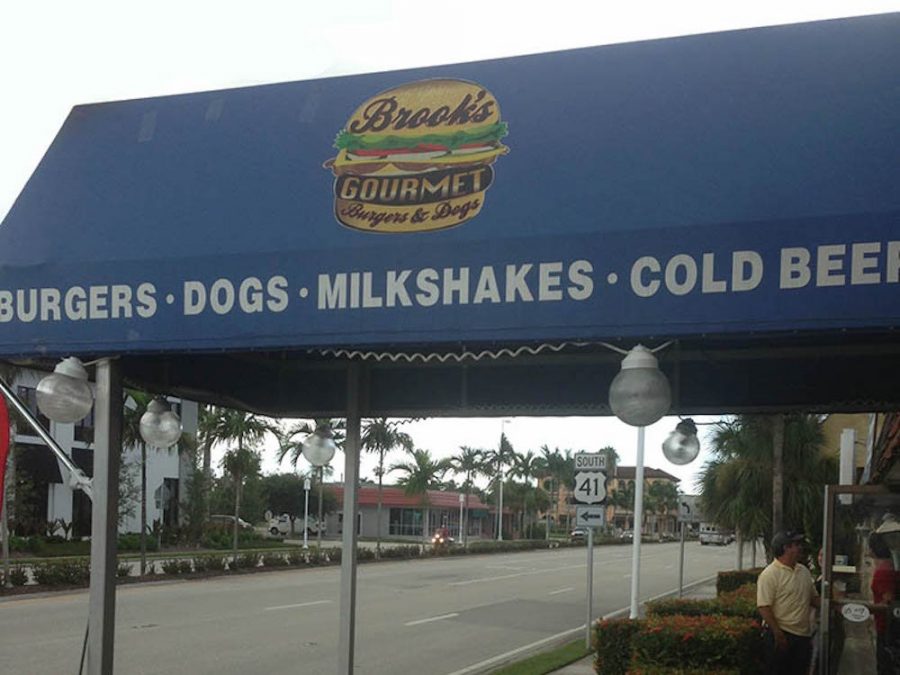 The first time I visited Brooks Burgers in Naples it was a Lindburgers. The Lindburgers chain, founded almost forty years ago in Delray Beach is still around today.

There are restaurant locations in Delray Beach, Lantana, Wellington, and West Boca Raton. I thoroughly enjoyed the burgers at Lindburgers but the rest of the menu left a lot to be desired.

You can read about my visit in 2009 if you scroll to the bottom of this page.

When I returned a year there was a noticeable change in the menu and even the burgers had a flavor upgraded too.

My family spends one week a year vacationing on Marco Island which is right near Naples. I make it a point to always eat at Brooks Burgers and I’ve seen them grow from one location to 4 restaurants along with a food truck.

The addition of the hand-battered corn dog and the cheese curds were right in the Burger Beast trajectory and are definite must orders.

Rookie mistakes will happen and I have not eaten their hand-breaded chicken tenders. And when it comes to burgers I’m all about the Classic Cheeseburger.

Due to the issues that have arisen with the pandemic, they have a temporary menu.

Brooks Burgers has been amassing accolades like the Number 2 Burger Joint in the Nation by TripAdvisor. Many believe it’s the Best Burger in Florida.

I’m not sure if it’s the best but it is definitely one of the 24 Florida Burgers you have to try!

July 12th, 2009 – Usually, when I make suggestions to Marcela about places we have to try, she goes along with me even if she disagrees. Lindburger’s is one of those places I may never live down to her.

I attempted calling Lindburgers throughout the day, only to find out they don’t answer their phone (just like me). When we arrive at about 9:10 PM, they are not open.

Lindburger’s is known for their “50 Gourmet Burgers,” which translates in Burger Beast speak to “I have to eat here.”

Once Marcela took a look at this dive of a joint (and at this point, she only saw the outside), I knew it was going to take extra convincing the next day to come back.

Once we walk in the next day, there is the only thing that goes through my mind, Marcela will hate this place. We sit down to our squeaky clean table and look over the menu.

Like the gentleman that I am, I order the appetizers for us, “An order of nachos and o-rings will be suitable to start with, dear sir.”

All around us are these tents hyping their different appetizers, but I notice something. At the bottom is the brand, which happens to be the same brands you can get at a Costco or Sam’s Club. In other words, no homemade apps.

It was a pretty sad plate of nachos that were served, but the onion rings were alright. Marcela, for some reason, after having been on a Tuna Melt winning streak, decides to order Tuna Melt (rye with cheddar cheese- broiled).

I believe she overlooked the word “Broiled” because she spits it out the minute she took one bite of it. She hated it. The waiter apologized and offered to replace it for her, but she passed.

I ate the Dagwood burger, which is two patties with cheese. According to their menu, the meat is “100% USDA pure fresh ground beef (Never been Frozen)”.

I gotta be honest with you; I loved it. You could taste the seasoning on the patty, and the burger patty itself had a great flavor.

After the nachos and Marcela’s Tuna Melt, I was expecting a giant disaster. I was wrong; I loved the burger.

A word to the wise, it’s called Lindburger’s. Play it safe and order a burger; after all, it’s not called Lindtuna (yeah, that sounds gross).