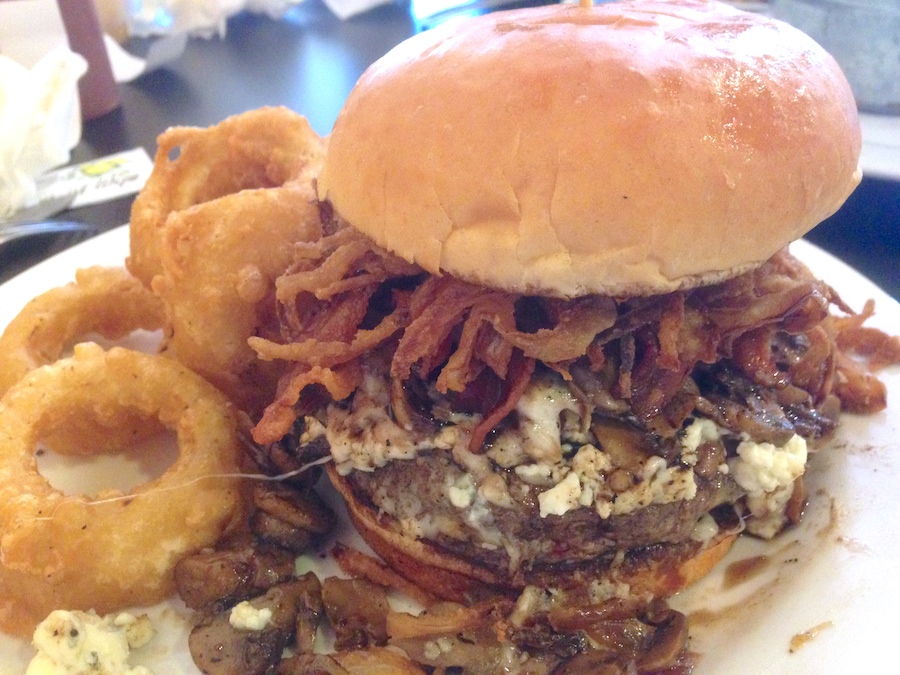 Shortly after his appearance on Top Chef, Howie Kleinberg opened Bulldog Barbecue in North Miami, Florida. I loved the food, and they even went on to win Burgie Awards for Best Mac N Cheese in 2009 and Best BBQ Joint in 2012.

A few years later, his new concept Bulldog Burger, allowed him to take over the space next door and expand the seating. The restaurants shared a menu that revolved around barbecue and burger comfort food.

Both restaurants quietly shut down operations in early 2018.

February 7th, 2009 – If you watched earlier seasons of Top Chef, you know who Howie Kleinberg is (he was on Top Chef: Miami). If you don’t, then all you need to know is Bulldog Barbecue (5400 Biscayne Boulevard, North Miami) is his baby.

Fred and I decide to check out the place, and Howie happens to be there (we never spoke to him, he seemed busy). The spot seats 40 and has a relaxed vibe. The flatware, some sauces, and napkins are hanging tidily on the wall next to our table.

We are brought this little metal canister with two pieces of cornbread, served cold. Interesting never had it that way before, it was good, but it would have been better warm.

We order a couple of their Snacks, aka appetizers: Smokehouse Wings & the BBQ Chicken Flatbread.

The wings had an indescribable flavor, meant in a good way (served with a delicious buttermilk blue cheese dressing). Fred agreed; they are probably some of the best wings we’ve ever had. As a bonus, here is Fred showing you his technique for eating wings ( You may want to turn down your speakers, it’s a little loud).

All sandwiches are served on potato rolls, with chipotle or sweet fries and slaw (I’m not too fond of coleslaw, but Fred loved it enough to eat two portions). We both agreed that we liked the Portobello Burger best because of the sandwiches or Biscuits as defined on Bulldog Barbecue’s menu. Plenty of flavor, and the caramelized onions were a nice touch.

I’m not the biggest fan of sweet fries, but Fred seemed to dig ’em. The burger was good, and I liked the chipotle mayo. At one point, he mentioned how much he wanted to smear it all over himself (a thought that hurts my brain, plus we all know only men smear).

I enjoyed the hot dog, and the grain mustard was right on. But, unfortunately, Fred enjoyed the dog the least of all the dishes and later admitted that he isn’t a big fan of hot dogs.

That’s odd because I have witnessed him down dog after dog in a hot dog eating contest. A very close second for both of us was the Sack o’ Sliders, a definite must-order if you come here.

In order of preference:

Another definite must at Bulldog Barbecue is their side of Mac and Cheese; we both loved it. Just a heads up, there does appear to be some blue cheese in it, which explains why we liked it so much.

At this point, we figured we might as well order a couple of desserts and finish ourselves off. So Fred gets the Hot Chocolate Puddin’ Cake, and I choose the Apple Turnovers.

Both are outstanding. The Hot Chocolate Puddin’ Cake is essentially a molten chocolate cake with two banana slivers (good choice) on top and a scoop of vanilla ice cream.

The Apple Turnovers were delicious and flaky. When I couldn’t finish my dessert, Fred gladly helped me, as a family should.

November 28th, 2011 – I can’t believe there’s almost a three-year difference between the first time I stepped foot into Bulldog Barbecue and Bulldog Burger (15400 Biscayne Boulevard, North Miami). Of course, I knew that Bulldog Burger was right next door, but not that they were the same restaurant; there was only one menu.

Enough of that talk; let’s get on to the food.

We have to start with the cornbread; they are shaped differently from the last time. Goodbye cast iron skillet slice and hello cornbread cork shape. The duders were still served room temp and still good; no change here.

Holy f’in smokes. If you walk away from this post learning anything, it should be that having the Chili Cheese Fries topped with an egg is a must. Once you start eating it, you can’t stop.

It’s not the fries that make this dish (which somehow stay crispy through all this); instead, it’s the chili, cheese, and egg combo.

Are you one of those folks who attend parties and get excited when you see a platter full of pigs in a blanket? Then maybe you should try this amped-up version with delicious grain mustard.

When I hit up a Howie Kleinberg establishment, I overdo it, and Bulldog Burger was no exception. Before I get into the burgers, I should commend him for not overusing his space and having a nice flow that does not have other people’s tables on top of yours.

I’m not interested in how long it’s been since you last saw Aunt Martha.

So, we started with the Not So Kosher Burger; Kosher salami, coleslaw, Swiss cheese, deli mustard, and a thousand island dressing schmear. It was my least favorite of the three burgers we ate.

Over the last few years, I’ve learned to tolerate pineapple. In some instances, I’ve even loved it, bringing us to the Hawaii Five-O burger with ham, roasted pineapple, pepper jack cheese, and Kleinberg’s housemade Big Kahuna sauce.

In this case, I love the pineapple flavor, especially since it didn’t kill the taste of the meat. And yes, that is the 2nd egg I have for those keeping tabs at home.

The third Bulldog Burger was the Luther Burger; a bacon cheeseburger served on a donut bun. Since I’ve had a Luther Burger before, it’s not new for me, but for my friend, it was.

This was hands down the Best Burger of the 3. It was cooked perfectly Medium as I asked, and you know what else he did, right?

He glazed regular burger buns instead of actual donuts so they wouldn’t be too sweet. Good job, man.

There are 6 or 7 burgers left on the menu to try, but that’s for next time. When you come by Bulldog Burger, don’t forget to try the chili cheese fries topped with an egg.

And if you can’t finish them, give me a ring; I’ll be right over. Save me some of your Luther too!