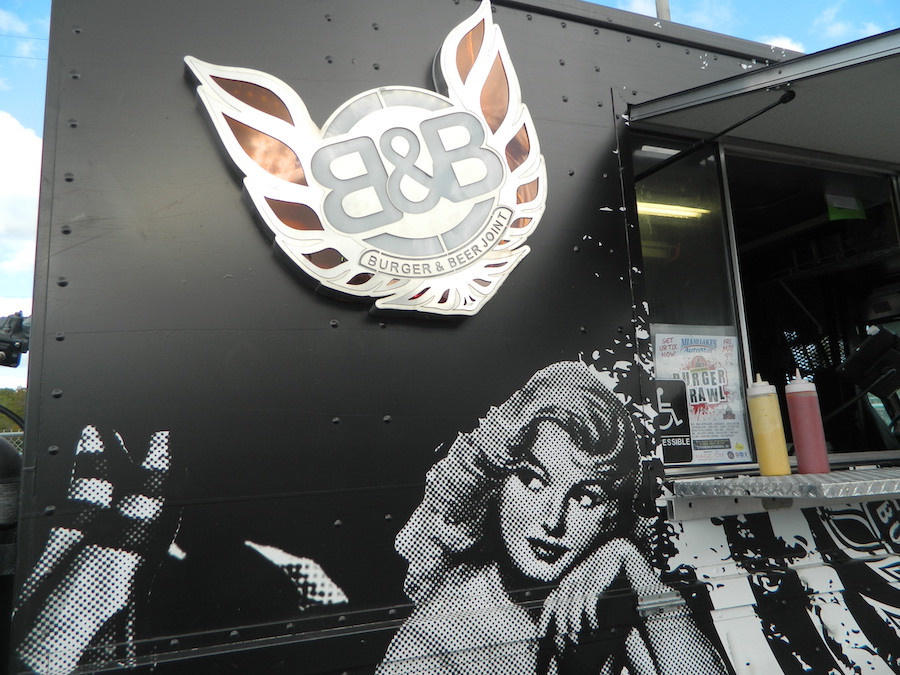 I remember very clearly when Burger & Beer Joint opened in August 2009. My blog was not quite one year old, and the burger scene in South Florida was on life support.

There was a level of excitement with their rock n’ roll attitude about what they were be doing, from the elevated burgers to the shakes and cocktails to that insane Mother Burger. They changed the game in South Florida.

A few months later, B&B was a part of my Burger Beast Miami Burger Tour and later my Burger-n-Broads Calendar.

August 18th, 2009 – Burger and Beer Joint (1766 Bay Road, Miami Beach) has a steakhouse look and feel, with great music playing (always a plus). However, we came here specifically for the Mother Burger. Mother Burger?

Yeah, this thing is 10 lbs. plus a four lb. bun and all the toppings. This, of course, being a beer place, I thought it would also make sense for Dave from South Florida Beer Blog to join me.

We ordered the crispy dill pickles and the octane wings (93) to get everything started. The braised organic chicken wings come dusted with tempura flour. The heat level options were 87, 93, or diesel.

Dave also ordered a beer for both of us (not to share). So, which of their almost 99 beers did we get? You’ll need to check his blog post to find out.

The wings were good and were legit falling off the bone. The sauce on the wings, as well as the ranch dipping sauce, was fantastic stuff.

I don’t eat pickles often, but I loved their crispy dill pickles with atomic horseradish sauce. The Atomic Horseradish should be bottled and sold (to me exclusively).

At some point, we ordered all the sauces for dipping. As a side note, any of Burger & Beer Joint’s eleven sauces can be added to your custom burger.

The Mother Burger arrives; this thing is massive and ridiculously big. We also have a ridiculously amazing four-cheese mac n cheese to eat.

A saw is used to cut it into six pieces. I, of course, get the largest piece.

The pressure is on. Did I finish my piece? Maybe I did, and maybe, just maybe, at Dave’s suggestion, I ordered another burger also.

This dude was excellent; one of the best burgers I’ve had. The bacon on it was unreal, making me regret not ordering their Basket o’ Bacon starter, but there’s always next time.

January 20th, 2012 – If you wanna talk about a restaurant where I’ve worked my way across the entire menu multiple times, then Burger & Beer Joint is that spot. The new location in Brickell (900 S Miami Ave, Suite 130, Miami) picks up where the SoBe location left off with its cool decor and music-influenced burger names and creations.

I’m particularly excited about it cause it cuts my drive time in half, time that could be spent eating and not stuck in Miami traffic.

Everything on the snack side ranges from good to excellent, but if I needed to pick out a few standouts, it’d be the mushroom fries and the crispy dill pickles. Both are breaded, deep-fried, and served with a side of buttermilk ranch, and yes, both are excellent.

If you’re a first-timer at Burger & Beer Joint, you should ease yourself with their Thunder Road Burger. It’s their version of a Western Burger with smoked pork belly bacon, American cheese & BBQ sauce.

However, if you can handle the heat, then Sympathy for the Devil is your guy with chili, cheddar cheese, pickled jalapeños, sour cream, & habanero sauce.

On this occasion, I was channeling Glenn Frey. So I ordered the Hotel California (guacamole, cheddar cheese, grilled onions, jalapeño relish, cilantro sour cream & a sunny side up fried egg).

It’s a well-rounded burger, plus their 1/2 lb. burger patty is killer. Don’t overlook this one when you’re deciding what to eat.

I’m not much of a dessert dude, and I’m no fan of Twinkies; I don’t get them. BUT….deep-fried Twinkies are a different thing altogether. B&B serves them with a few scoops of vanilla ice cream; dare to share at your own risk.

It’s also a great place to sit at the bar and have a few beers or drinks if that’s your thing. Me? I’ll stick to the mushroom fries & burgers.

March 2nd, 2013 – A couple of days ago, I was browsing my Twitter followers when I came across a @BnBFoodTruck handle. Burger & Beer Joint is joining the Miami food truck scene. I’ll keep you posted as soon as I hear anything else.

UPDATE: The Burger & Beer Joint Food Truck made one of its first appearances at the Wheelin’ Dealin’ Food Truck Festival on March 19, 2014 and I enjoyed some mini corn dogs with a Thunder Road burger.

May 6th, 2013 – It looks like Burger & Beer Joint will open up its first Broward location in Pembroke Pines this summer of 2013. You can find them at 11025 Pines Boulevard. Unfortunately, I’ve got no other information for you now, but as soon as I hear something, you’ll be the next to know.

Old School is the Best Scool