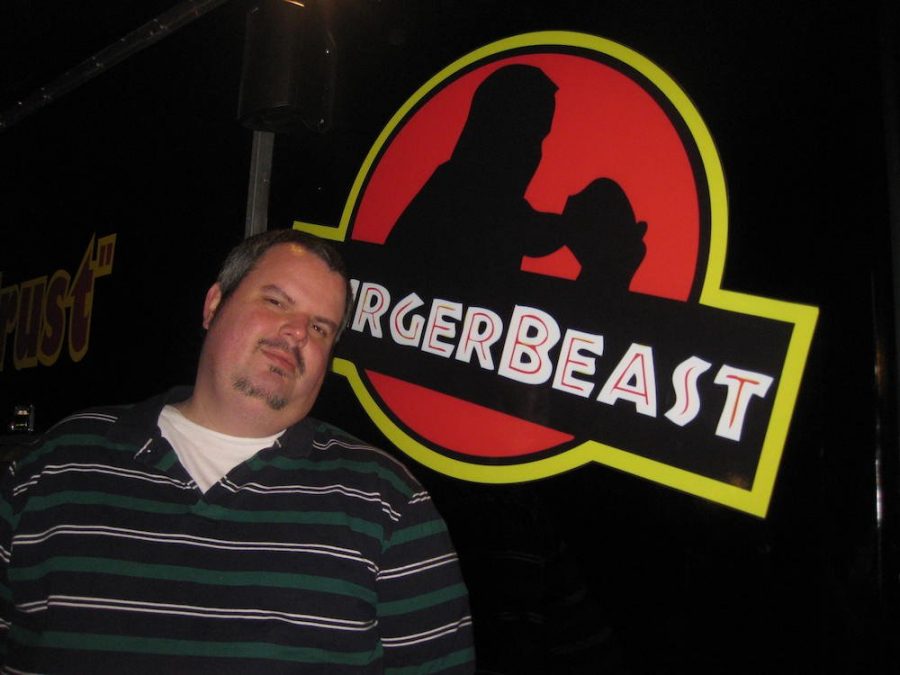 Since many years have passed, I thought it might be cool to write up my entire experience with the Burger BEASTmobile. Even though it only lasted a couple of months, I still have folks to this day trying to hire the BEASTmobile for catering.

When I first mentioned a Burger Beast Food Truck in the works, it was part of the announcement for Street Food Fridays. Then, I didn’t reveal any more info till Thursday, January 6th, 2011, when Thrillist revealed all the details. I also wrote about it on my blog for those who weren’t subscribed to Thrillist.

The Burger BEASTmobile name was coined by Frodnesor a few days later, and I went back and changed any mention of the truck to the new name.

The idea for the truck started in early November of 2010 when David Garcia, the owner of La Camaronera & the Fish Box, suggested it. He felt that if I spoke to food truck builder Food Cart USA, I could work out a deal for a food truck that would be mutually beneficial.

I loved the idea but wasn’t interested in cooking on a food truck, much less running it. Also, the reality that it would be frowned upon by my readers weighed on me when figuring out what exactly to do.

Then the idea for the revolving door of chefs came to me, so I decided it was solid enough to pitch it to Food Cart USA. Tania, the owner of Food Cart USA, didn’t even take a second to say yes.

As part of our agreement, I never owned the Burger Beastmobile; it was always the property of Food Cart USA. It was stored at their facility down in Cutler Bay. I did have 100% control of whatever it was used for since my logo was on it, and as a plus, I selected all the drinks to be sold on it.

The truth is once I announced the Burger Beastmobile, it received an overwhelmingly positive response, but George Motz thought that I may have lost my mind.

The Beastmobile needed to be ready by January 7th, 2011, for the 1st Street Food Fridays event at Miami Herald. We didn’t have the permit to cook on the truck yet, but we could vend out of it.

And so the call went out to Fireman Derek, who accepted the job of being the first of my favorites to sell out of my truck. He also had the horrible job of explaining to the hundreds of people who kept coming to the window that no burgers were being sold today, only Pies.

Looking back on it now, it’s so ridiculous that we even did that.

You can read below all of the posts I wrote about the adventures of the Burger BEASTmobile, including a eulogy about the end.

The Arrival of the Burger BEASTmobile

January 6th, 2011 – This isn’t a figment of your imagination; it’s the real deal. After speaking to Tania, owner of Food Cart USA, she agreed to create The Burger BEASTmobile powered by Food Cart USA.

I will answer the first thing that comes to your mind. No, I won’t be cooking on this baby. I’ll be inviting all my favorite restaurants and chefs to cook on it.

South Florida is big, and not everyone will drive around and try food all over the place as I do. It will be my pleasure to bring places like Charm City Burger Company, Georgie’s Alibi, Gilbert’s 17th Street Grill, and Quickie’s of Hollywood to Miami.

Plus, my favorite locations from Miami, like 8 oz. Burger Bar, Burger & Beer Joint, The Filling Station, and John Martin’s Irish Pub farther north. It’s a win-win for everyone, I think.

Thanks to you for reading and believing in the BEAST; without you, this truck wouldn’t be possible. There will be some surprises along the way, too, you know how I do.

Yeah, I like Burgers, and I know you do too.

January 6th, 2011 – We will be unveiling the truck tomorrow at Street Food Fridays at the Miami Herald. I’m hoping you all can make it.

Unfortunately, we won’t be cooking on the truck, but Fireman Derek will be selling some of his world-famous pies. Good stuff if you’ve never had it.

The cooking debut will be next Thursday, January 13th, and will feature my main man, Ortelio Cardenas, better known as El Mago De Las Fritas.

January 9th, 2011 – The number one question we received this weekend is, when will you be cookin’ on this guy? On Thursday, January 13th, at the new Miami Street Food Court at Biscayne Plaza (81st and Biscayne Boulevard), from 6 PM to 10 PM, will be El Mago De Las Fritas. If you’ve never had a Frita Cubana, you don’t know what you’re missing.

If you’ve never had El Mago’s food, you should be ashamed. El Mago’s been having a stellar year.

He will be part of George Motz’s revised Hamburger America book, President Obama visited his restaurant a few months ago, and in late February, he will compete in the SoBe Wine and Food Festival Burger Bash 2011. Before that happens, we were able to snag him so he could bring some of his magic to North Miami.

January 21st, 2011 – Make sure you make it out to 12795 SW 137 Ave from 6 PM – 11 PM to eat from Evan and the Quickie’s of Hollywood gang aboard the Burger Beastmobile. I spoke to them last night, and they are going to be doing their regular burger, the Mini M.O.A.B. (Winner of Best Specialty Burger at my Burgie Awards 2010), and their Wings covered in BEAST sauce.

The M.O.A.B. is a burger stuffed with cheese that oozes like a volcano. The Beast sauce is a mix of their golden barbecue and medium hot sauce and, yes, named after me. The burger is just plain awesome.

I’m gonna be carrying around a pocket full of Burger Beast pins, all you have to do is come up to me, and one is yours. And before you ask, we won’t be alone. There will be 28 food trucks there, craziness!

January 29th, 2011 – When I ask, who would you like to see on the Beastmobile powered by Food Cart USA? There is one place that always receives the most votes, and that’s Charm City Burger Company.

So go ahead and take a wild guess as to who is on my truck this coming week. That’s right, that’s right! Stay tuned for the exact day and time.

February 3rd, 2011 – For those who have never made it out to Deerfield Beach but have heard me carry on for well over a year about how much I love Charm City Burger Company, tonight is your night!

Charm City Burger Company will be on the Burger BEASTmobile powered by Food Cart USA, and below is their menu:

And they won’t be alone!

Did I mention that the Sun-Sentinel will be there filming for their TV show Inside South Florida? Did I also mention Charm City will be on the Beastmobile also? Yeah, I think you get the picture.

January 26th, 2011 – Pincho Factory will be cooking on the Burger BEASTmobile this Friday, January 28th, from 6 PM – 10 PM at the NEW Tamiami Truckers Event (13750 SW 136 Street). There will be over 20 trucks in attendance, but you need to come and check out the goods at the BB Truck.

What will Pincho Factory be serving?

Steak Pinchos? Fries cooked in peanut oil? The Double Pincho Burger? Or maybe their hot dog or their Rice Bowls with some of their delicious homemade sauces?

I honestly don’t know, but you can find out on Friday!

February 5th, 2011 – Some of you may have heard of Shake Shack, but if you’re reading Burger Beast regularly, I’m going to assume that you do. For next week’s Street Food Friday event, the Shack will be on the Burger BEASTmobile

They’ll bring their burger love to all the folks who come out for lunch. I’m gonna be first in line and don’t even think about cutting in.

February 11th, 2011 – Today’s the day! Come out to the Adrienne Arsht Center for lunch and enjoy this Flamenco-influenced Street Food Fridays with Flamenco demonstrations, giveaways, and each truck with a flamenco-inspired dish.

The festivities start at 11:30 AM, so come hungry!

February 4th, 2011 – Michael Schwartz will be cooking some dishes from his new cookbook, Michael’s Genuine: Down-to-Earth Cooking for People Who Love to Eat on the BEASTmobile.

The book will also be available for purchase and a great opportunity to get it autographed. The menu is below, and I’ll take one of everything.

February 12th, 2011 – Come on out to the Art Walk tonight; you’ll have a chance to see James Beard Best Chef winner Michael Schwartz cooking and selling, autographing his new book on the BEASTmobile.

But he won’t be alone as many trucks will be there. I’m also happy to say Blue Willy’s Barbecue is making its way down from Ft. Lauderdale with its superb grub.

The bad news? This is your last chance to see the Burger BEASTmobile as it will retire from action after tonight.

The End of the Burger BEASTmobile

February 13th, 2011 – Last night was the last time the BEASTmobile was out and about in the growing Miami Food Truck Scene. Some thank yous are in order:

Thanks to all the food truck operators who helped us when we couldn’t figure out how to turn things on, like Brian from Ms. Cheezious, David from The Fish Box, Richard from Dim Ssam a Gogo & Troy from The Rolling Stove.

Thanks to Food Cart USA for agreeing to my crazy idea and making it a reality. Andy, you’re the man!

Thanks to everyone who would get excited when we would announce who was gonna be next. And who showed up to eat and made us look like the most popular kid in school.

Special Thanks to my cousin Chunktronics, the real workhorse behind the truck who ensured I didn’t lose my mind on some nights. And to my Pops for driving Baby (the BEASTmobile’s nickname) on one of the nights.

See everyone around on the Miami Food Truck scene, and who knows…one day, there could be a BEASTmobile II.