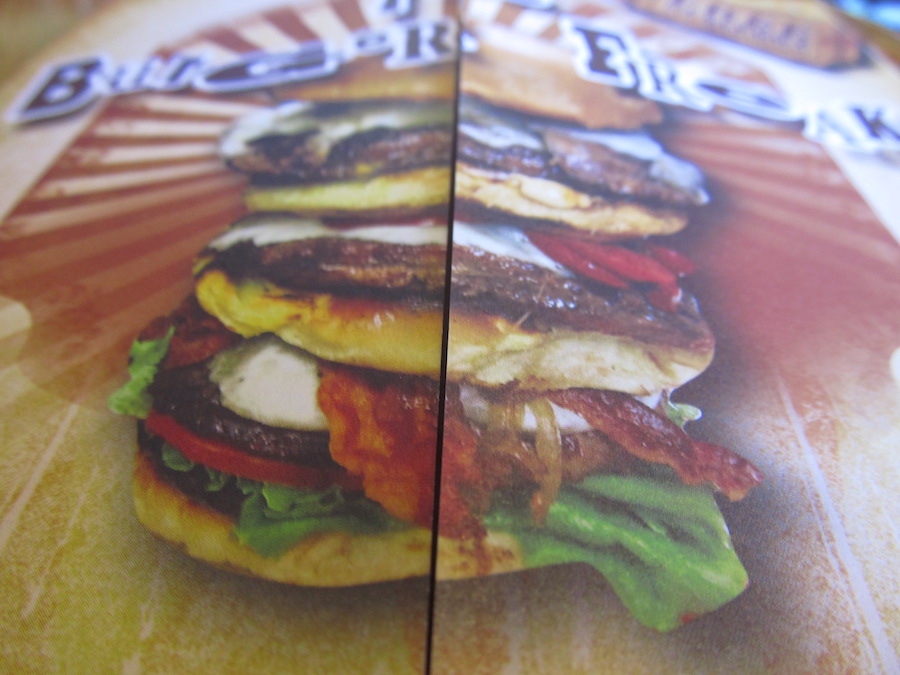 The Burger Freak in Fort Lauderdale had a theme I could get behind, circus sideshow freaks. Initially, they opened in a small spot and later expanded into a space that quadrupled their seating.

Burger Freak had a good run and was open just shy of six years when it closed for unknown reasons. It was a cool spot whose food and decor left a memorable mark on this Burger Beast.

What Are You, Some Kinda Burger Freak?

August 20, 2012 – We’ve all been there, someone calls you a Burger Freak, and you think about it and agree. Hey, it doesn’t hurt to be honest with yourself.

Burger Freak (6880 N Powerline Rd, Fort Lauderdale) fills the void for your kind, um, err, our kind. The menu has some little-seen concoctions on it; check them out below.

Burger Freak has a sideshow theme which I happen to dig. The walls are covered with old sideshow/carny posters. I almost felt right at home.

There are plenty of options, but I wanted to keep it simple for my first order. There’s a hot dog called the Beast, but it’s half a pound, and if I’m planning on having a burger too, it would be a bad idea.

I end up with the Grilled Devil Dog (half a Beast) and throw in a cup of their Hamburger Chili. On the burger side, I create my own; a 6-ounce Angus patty, brioche bakery kaiser with bacon, and cheddar cheese (American was unavailable).

The Hamburger Chili is Hormel brand chili, and if I’m wrong (which is doubtful), it must be the closest replica I’ve ever tasted. So if you like Hormel canned chili, this is for you; for me, it was not.

There went my original plan to dip the dog in the chili!

The jumbo half hot dog was split and crisped up on a fluffy toasted bread. Some raw onions and yellow mustard rounded out my toppings for the Grilled Devil Dog.

The fries are Natural Cut Fries which means they’re not fresh cut but are as close as you can get by using the frozen stuff.

And the burger? The burger is a top-notch fast food-style burger. I wish they had American cheese since I think it’s a better option for this type of burger.

I want to go back and try out one of their specialty burgers, maybe The Sword Swallower (burger topped with sliced Italian sausage) or The Two-Headed Man (burger topped with hot dog). Meat on Meat action, isn’t that what it’s all about, my fellow Burger Freaks?

Gone But Not Forgotten