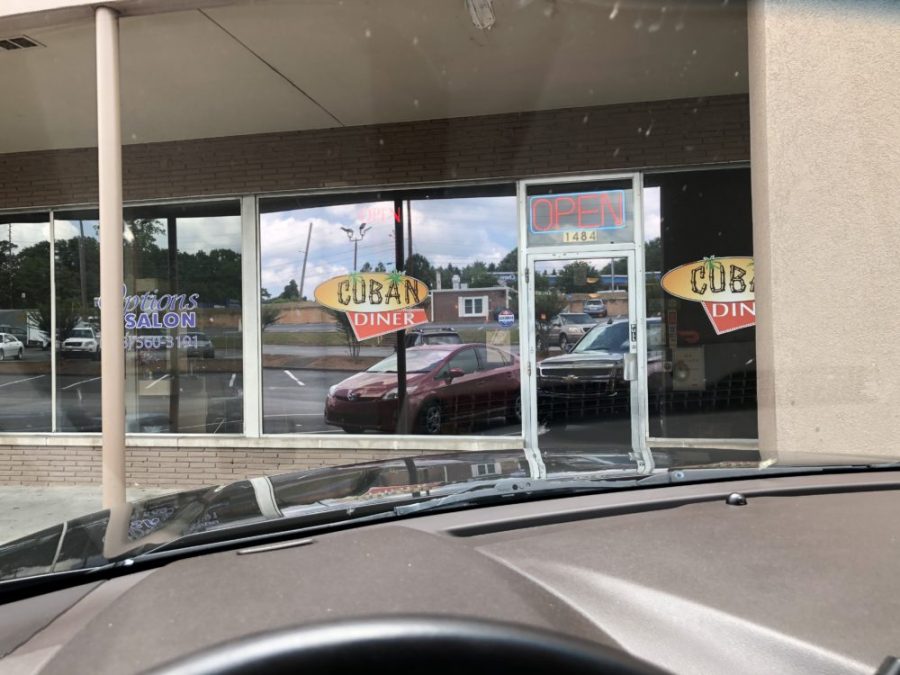 Right after I dropped my wife Marcela off at an antique shop in Georgia, I headed out to look for some grub. Well, that’s not true; I initially looked for a car wash but spotted this strip mall with the Cuban Diner (1484 Roswell Rd, Marietta).

I was a handful of days away from getting back to Miami and beginning to feel homesick. I hoped that the Cuban Diner would make me feel at home while almost 700 miles away in Marietta.

I was also interested in what might be on the menu but not 100% committed to eating there yet since it was odd to find Cuban food in Georgia.

If there are croquettes and a Frita Cubana, then I’m game. Not even a minute later, I was walking through the doors of the Cuban Diner.

They had just opened and seemed to be still getting their bearings. A few folks were seated and speaking to the waitress, which allowed me to take the place in.

So, true to form, I order the croquetas, yuca fries, a frita, a Cuban coffee, and flan for dessert. Based on the price ($3.25), I had little faith that the croquetas would be housemade and not the store-bought ones available in every market all over South Florida.

The fried ground ham cylinders arrive, and as expected, they’re of the prepackaged variety. But, hey, it’s ok. I love croquetas of all kinds, and I can imagine there isn’t a high demand in Marietta for homemade croquetas. I’m not surprised since they are labor-intensive to make.

The yuca fries show up as a side dish for my frita. I’ve never seen fried yuca like these before. It almost looks like they made the yuca fries using the little handheld contraption to churn out churros.

The fried fellas come with a chimichurri dipping sauce. I love chimichurri as any self-respecting Cuban does, but a cilantro sauce would have made them a home run.

The frita, or its full legal name, the Frita Cubana, arrived in a fluffy hamburger roll. It leans more towards hamburgers than frita, but the seed of Cuban flavor is there.

The seasoned patty comes with ketchup, potato sticks, and diced raw onions. I enjoyed it.

The last part of this lunch was necessary, a creamy flan with a cafecito (Cuban coffee) chaser. The delicious flan and that Cuban coffee are what I craved. The cafecito made me long to be home.

After paying the bill, I asked if the owner was in, but it was their day off. Just kidding, they didn’t happen to be in at that moment.

I wanted to ask how they ended up in Marietta, assuming they’re Cuban. It sounds like it could be an interesting story.