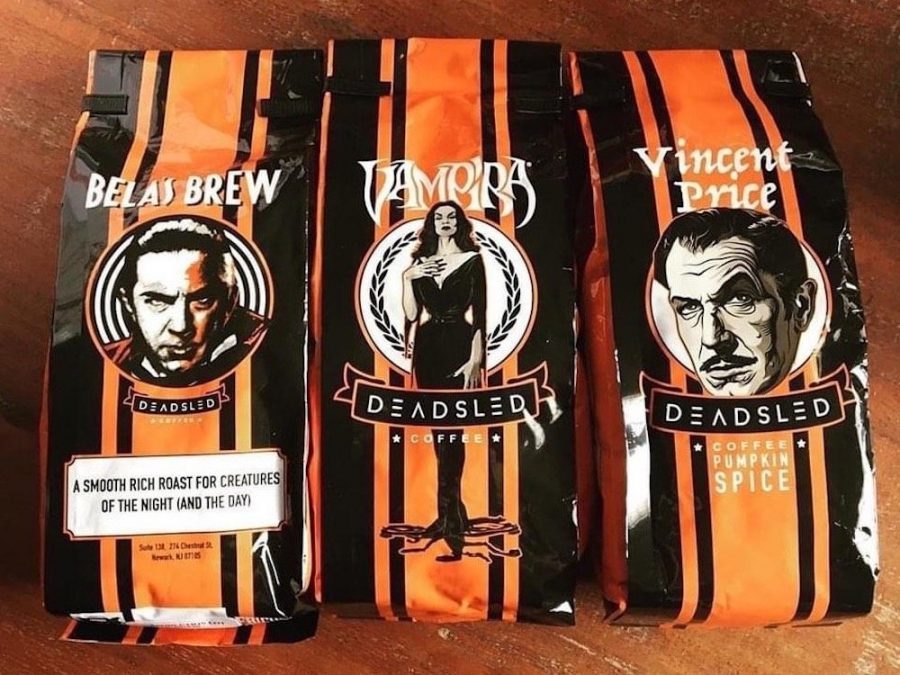 Dead Sled Coffee caught my eye cause of its Vincent Price Pumpkin Spice coffee. Then after hitting up their website, I realized there was a Bela Lugosi and a Vampira roast. My favorite horror movie icons are primarily old school, like Bela, Boris Karloff, Lon Chaney Jr., and Peter Lorre.

I didn’t mention Vincent Price, but he is a top three for my wife Marcela and me. I remember watching The Fly and House of Wax as a kid, and who could forget his super cool voiceover in Michael Jackson’s Thriller? Then, when I got into my teenage years, he was the inventor of Edward Scissorhands, his last iconic film role.

To even tie Vincent Price more into my food world, many folks don’t know he released some cookbooks.

Dr. Vincent Clarence Price, grandfather of “The Master of Menace” not only invented baking powder but also holds the patent for vanilla and lemon extracts, and some early breakfast cereals?

Most hardcore coffee folks look down on me since I like a little half & half and a teaspoon of sugar in my cup of joe. I’m by no means a coffee expert, but I am a giant coffee fan. The only time you’ll catch me having black coffee is when it’s espresso—the darker and more profound the coffee tastes, the better in my espresso world.

Of the three we purchased, I’m 100% behind Bela’s Brew, being my favorite. Vampira was probably a close second, with The Master of Menace taking third. I’m into the whole pumpkin spice thing, but I’m more of a purist regarding my foods and drinks.

Robert Englund’s Nightmare Blend is about to launch, but I missed out on the preorder, so I’ll have to wait for its regular release. The press release says it’s bold with more robust caffeine content. Sign me up for that. You have to stay awake,] because if not, Freddy’s coming to get you!

Dead Sled Coffee strives to create a culture of acceptance and respect no matter what your level of coffee knowledge is.

We are Distinguished Coffee for the Exceptional & Unconventional

We offer amazing products that don’t require your dictionary or atlas to appreciate. Feel comfortable ordering our coffee and know that it’s not a crime if you don’t care where the beans came from. Or where it was processed. We’ve done all the work for you having slurped and sniffed through endless cuppings so you can just sit back and enjoy your coffee experience.

First and foremost! Let us introduce to you to:

The coffee itself is a perfect blend of a high quality single origin Robusta Vietnamese coffee and a blend of Arabica beans from South America. All which are ground down to a Turkish-style grind. Hence the name “Turkish Blend”. Turkey itself doesn’t grow coffee, but the fine grind of the blend is what makes it a Turkish-style coffee, which allows a stronger flavor to be released upon brewing.

Robusta coffee is the traditional bean of Vietnam and has nearly twice the caffeine of Arabica coffee beans. The finely ground blend of the Vietnamese Robusta and South American blend allow not only a bolder flavor, but a naturally stronger caffeine content so you can STAY AWAKE and stay safe from the King of Nightmares.

Ok, let’s talk about the bundle. The first thing that is exclusive to the bundle is one of the two bags of coffee that you’ll receive. The “sweater” bag will be the fulltime bag from this day forward. However, the second bag of coffee, which is exclusive only to the pre-order looks a little different. The back of the bag features the blue front door from part 1, with someone checking in on your every move from the window.

And of course you’ll receive a limited edition coffee mug to sip your new favorite coffee out of. Also only available through the pre-order.

Last but not least there will also be some pretty cool exclusive swag in your package as well. Magnets, pins, and stickers.. oh my! Stuff that you’ll only be able to get when you pre-order the bundle.

Bela Lugosi created his unique characterization of Dracula on the Broadway stage in 1927 and brought it to the screen in 1931. Little did he know that when he spoke the famous line, “I am Dracula,” he would be forever immortalized for his portrayal of the Count.

In the 1930s, Bela lived in Los Angeles and enjoyed the success of his role as Dracula. From his Hollywood Athletic Club bungalow, Bela’s daily routine began with a long walk up to Hollywood Boulevard where he bought his newspaper, picked up cigars from the tobacconist, and then stopped by Schwab’s Pharmacy for a cup of coffee. There, he would often be surrounded by young people hoping to break into film.

As a tribute to Bela Lugosi, DEAD SLED COFFEE is proud to have worked with the his Estate to create this signature coffee blend. A New Orleans Chicory style coffee that’s dark, rich and smooth. Great with cream and sugar-even better with an order of Beignets! Available in 12oz. bags of ground coffee.

Our new Viva Vampira Single Origin Mexican Oaxaca coffee is roasted to a deep rich Full City roast; This would be just a little dark than a medium, but definitely as bold as a dark roast. This coffee is a specialty coffee, which means it falls in the top 20% of the coffee traded on the market today.

Vampira should need no introduction. She’s the original Ghoul Girl. When not appearing on TV or Films, she could be found hanging out at Googies coffee shop with the likes of James Dean. Her dramatic image continues to inspire and mesmerize to this day. We think her coffee will do the same.

Available in 12 oz bags of whole beans or grounds.

His vast talents in noir, drama, mystery, thriller and comedy roles have made him one of the most respected and loved thespians of the 20th century. Though Vincent Price was most well known for his work in horror films, he was truly a man of many passions, among them collecting art and cooking.

Our Vincent Price Pumpkin Spice Coffee blend ties together both his love for the spooky and his passion for food and drink. Designing this blend was a thorough process; not only out of respect for the legend himself, but for you, the coffee drinker.

We were lucky to get our hands on a Bela Lugosi mug when we placed our first order with Dead Sled earlier this year. The most fantastic feature is that it’s heat-activated. The mug is black until you fill it with your coffee, and then the design on either side will materialize.

It’s no longer available, just like the previous Vampira mug, which I need for my collection. However, there is a Bela Lugosi hoodie for your hardcore fans in their shop.