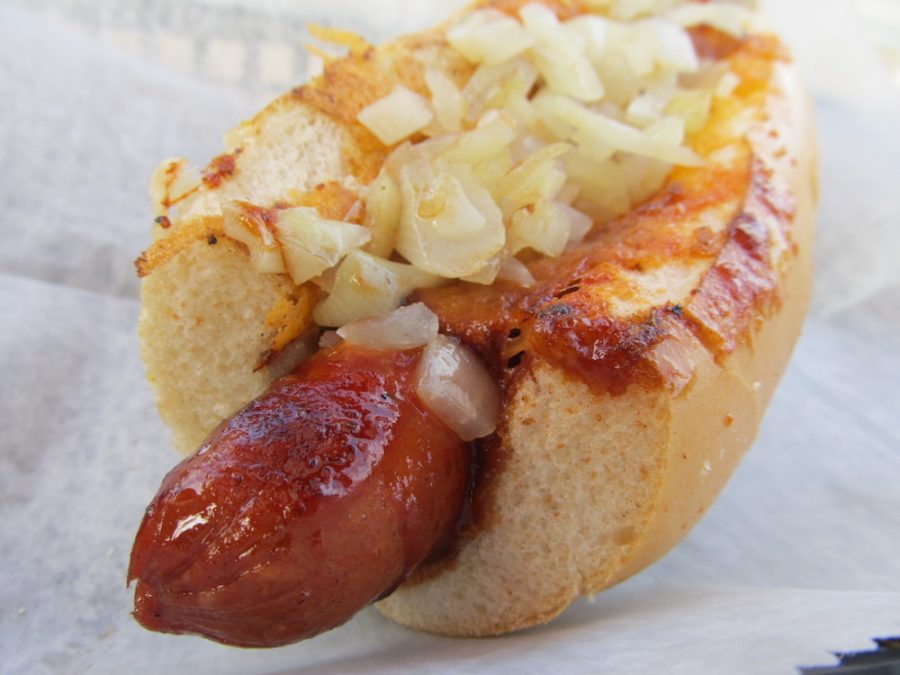 In 2002, Dogma Grill would open its first location on 7030 Biscayne Boulevard in Miami. The inspiration for Dogma Grill is Pink’s, the iconic hot dog joint in Hollywood (California).

Over the following five years, they would add Fort Lauderdale, Miami Beach, and North Miami locations. Unfortunately, only the original spot has survived.

Since I wrote the original post on Dogma Grill, its ownership has changed hands several times. One of my favorite items, the Burrito Dog, was removed from the menu.

Frankie Cupri, former co-owner of Andiamo Pizza right down the street, also co-owned Dogma for a handful of years. He added the killer cheesesteak from the Andiamo pizza menu and a Chicken Philly.

Thanks to the wiener gods, the Pitchfork Hot Dog, my hands down, my favorite dish on the menu, is still there for your enjoying pleasure.

March 6th, 2009 – I was turned onto Dogma Grill years ago by an old friend. He spoke to me of the good food and the great music playing while he was there (PJ Harvey, Pixies).

What I particularly like about the place is how fresh its ingredients are.

I know you hot dog fiends are wondering two things, what and how. Your answers are Hebrew National and grilled on a flattop.

The first time I ate there, I tried their french fries with fresh garlic and the Burrito Dog. I was blown away by the fries as I had never tried that combo before.

Later on, I tried the same thing at Gordon Biersch, but I still prefer Dogma’s version.

I hadn’t been to Dogma in a while, so I figured I should check out if anything had changed on their menu. I get to the window and go with the Burrito Dog, L.A. Chili Dog, and Chili Cheese Fries.

Everything seems to be pretty much the same.

As soon as I pay, I fill my cup with Coke. I look at the window I was standing in front of, noticing an advertisement for burgers.

How is it possible I didn’t notice it since I was standing right in front of it? I do the only sensible thing; I order a Pitchfork Burger!

Now, I know what you’re thinking; there is no way he will put down all of this food. You’re right, I’m not, but one must act when a great surprise presents itself.

Getting back to the Burrito Dog, it was just as I remembered it: 2 Hot Dogs, Chili, Bacon, Mustard, Chopped Onions, Sour Cream, Shredded Cheddar Cheese wrapped in a Flour Tortilla.

The chili here is good, so piling it on fries with shredded cheddar, it’s a great combination. The Pitchfork Burger arrives as I’m making my way through my Burrito Dog.

It’s looking at me like the kid who always gets picked last at kickball. I was second to last for the record, yeah, baby! Damn you, Burrito Dog!

I pick up the burger and have a moment with it. After I take one bite and put it down, I then decide to go back to finish the Burrito Dog.

I can’t keep the pitchfork off my mind the entire time I’m finishing the dog. When I return, he’s snugly lying there in his little container, looking back at me. I haven’t forgotten you, and I won’t.

It was a good burger, all joking aside. I plan on going back to eat another Pitchfork Burger (for only another $1, you can add another patty, hmm….).

This time, you can bet he’s getting picked first.

In 2009 and later again in 2011, Dogma Grill was voted Best Hot Dog in Miami at my Burger Beast Burgie Awards.

More In The Same Neighborhood