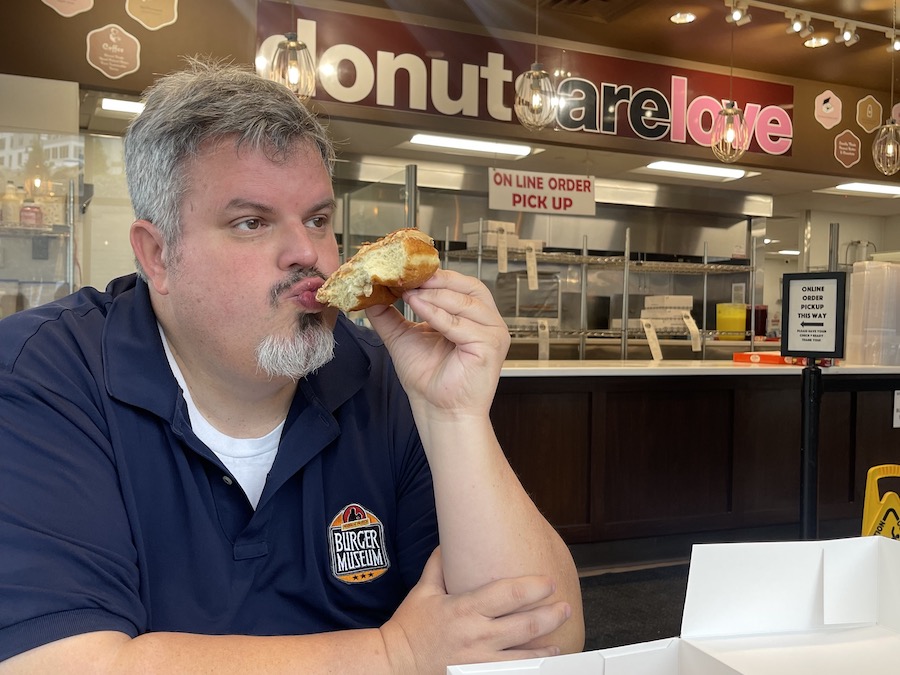 Donuts are not at the top of my food list, but Kolaches, now that’s a whole other story altogether. Nevertheless, they’ve been steadily climbing the list of my favorites for the last few years.

Marcela, Chunktronics, and I spent 27 days on a road trip for the Camacho Bold Burger Battle. During that tour, we drove through 25 states, a few of them twice:

We found ourselves picking up or using drive-thrus for many breakfasts when we weren’t eating the hotel’s morning freebies. So, on most occasions, donut shops became our on-the-drive morning stop.

We tried to steer clear of national chains and focused on restaurants frequented by locals. However, there was one exception I wish I had made, Dunkin’ in Boston.

It seems like there is a Dunkin Donuts on every corner in Boston, and they’re all busy. After leaving town, I realized that if I was going to grab a donut and coffee from Dunkin ever, it should be in their hometown.

My first interaction with kolaches was at Southern donut shops. What’s not to like about these giant pigs in blankets?

The first time I remember eating one was from Fox’s Donut Den in Nashville, Tennessee. I couldn’t figure out what to call the kolache, so I asked for a wrapped hot dog. But unfortunately, they didn’t correct me.

Even though a real-deal kolache is a Czech pastry, it is believed that Texans brought meat into the equation. I found a couple of Kolache-centric shops in Houston, and both were great.

This list excludes Laurel Tavern Donuts in Laurel, Maryland, which was out of donuts but the time we arrived, but luckily the sliders were not. There was also DONUT-Licious in Spring, Texas, where Chunktronics went at it solo and took some horrible pictures that will never see the light of day.

If you come across one of the Kane’s Donuts locations (1575 Broadway, Saugus, MA) in and around Boston, you must make a stop. First, eat a breakfast sandwich and a donut, then take some to-go to fulfill your afternoon cravings.

However, I could have done without the overwhelmed employee who would drown in a cup of coffee. Also, a couple of fellas were discussing stabbings and killings, which made the wait more tolerable.

I’ve had Tim Horton’s (161 W Dussel Dr, Maumee, OH) in New York City and Columbus, Ohio before, so this wasn’t a first-time visit. Also, it was near the antique mall Marcela was shopping at, so I had some time to kill.

The coffee and donuts were ok, but those Timbits Donut Holes were excellent.

Most of the Jack’s Donuts (516 E Carmel Dr, Carmel, IN) locations are in Indiana. It’s a solid choice for donuts, and yes, the sour cream was the best of the bunch.

Howard’s Donuts (8130 Bellevue Pkwy, Cordova, TN) is another small regional donut shop chain in the Memphis area. Again, the donuts were good, but the kolache was even better.

In-N-Out Donuts (802 W California Ave, Ruston, LA) has some magic happening in the kitchen. My favorite things were the kolaches and Marcela’s croissant, which I was allowed to try, lol.

The chocolate long john filled with Bavarian creme and maple bacon donuts were worthy of a repeat order. But, unfortunately, we were heading to Houston.

We broke so hard to make the turn when we saw a kolaches and donuts (673 N 1st St, Timpson, TX) sign. They were out of almost all the donuts, so we went with the glazed.

The lady at the drive-in window behaved somewhat erratically. First, Fred asked for a donut; then she’d shut the window to get them, then ask, what else? She repeated this technique for everything we ordered.

Bobas were also promoted on the backside of the building, and Marcela was shut down when she asked for one. The “girl who makes the Bobas” had already gone home for the day.

Karma Kolache & Dessert (12647 Tomball Parkway, Houston, TX) does a bunch of kolaches and donuts; sign me up! The old-fashioned buttermilk was the big donut winner as far as I was concerned.

It was getting late; the Krispy Kreme at 980 N 9th Ave in Pensacola had a beautiful vintage sign and the Hot Now sign was lit. It was a sign from the nighttime snacking gods.

We ordered half a dozen of those puppies, and luckily they left the last two beauties for me.

There’s an entire post forthcoming about Buc-ee’s, the mega convenience and gas shop. In the meantime, let’s focus on their kolaches.

We stopped at two Buc-ee’s, one in Florida (2330 Gateway North Drive Daytona Beach) at the start of the tour and the other Texas (4080 East Freeway Baytown) on our way home. The jalapeño cheese kolache took a concise route from the shopping cart to my stomach on both occasions.

Buc-ee’s version has a sausage link with pieces of jalapeño rolled in American cheese inside sweet bread. While I fumbled to add the following address to my phone, it was the perfect snack.

The cheese kolache from Howard’s Donuts was good but nothing particularly memorable.

At In-N-Out Donuts (802 W California Ave, Ruston, LA), we realized the power of the spicy boudin kolache. It was freakin’ incredible, and we need more, but we are already on our way to Houston.

Chunktronics and I were so excited over the boudin kolache that we were ready to pull over if any sign on the current road trip sign mentioned a kolache.

Roughly two hours after leaving In-N-Out Donut, we come across a kolaches and donuts (673 N 1st St, Timpson, TX) sign. Unfortunately, they were out of donuts, but cheese kolaches were available.

It was a no go on the boudin kolache, but the cheese kolache hit the spot.

And speaking of cheese kolaches, Shipley Do-nuts (15135 Old Humble Rd, Humble, TX) had the best sausage kolache we ate all trip. This was a straight drive-thru visit for a kolache and a coffee. We got the kolache fever!

I enjoyed Shipley’s cheese kolache so much that I returned a few mornings later to repeat the same order. The only problem was the coffee was horribly burnt both times.

No donuts were harmed at Shipley’s because we didn’t eat any.

The following morning we found a kolache factory.

The selection was overwhelming as you can see below from the three displays. Chunktronics and I pick three kolaches each and throw in cream cheese for good measure.

The cream spinach was his idea and I never tried it, nor was there any interest from this guy. On the flip side, the cream cheese is great and not as sweet as I expected.

I was so enamored with the pimento cheese that I’m pretty sure I never offered him a bite. But it serves him right for ordering that cream spinach when he knew I wanted no part of it.

We stayed in on our final afternoon in Houston. While scrolling through one of the delivery apps, I came across Karma Kolache & Dessert. They’re a kolache AND donut concept, genius!

We tried the cheeseburger, ham cheese, pepperoni pizza, smoked brisket, smoked sausage, and sausage cheese kolaches. There wasn’t a bad one in the bunch, but I go with the ham and cheese as the best one.

The simplicity of a rolled slice of ham with American cheese inside of the sweet bread was a winning combo. A very close second was the smoked brisket since I’m partial to brisket sandos.

My only real negative takeaway from all of the kolaches I ate in different states…what..no dipping sauce?