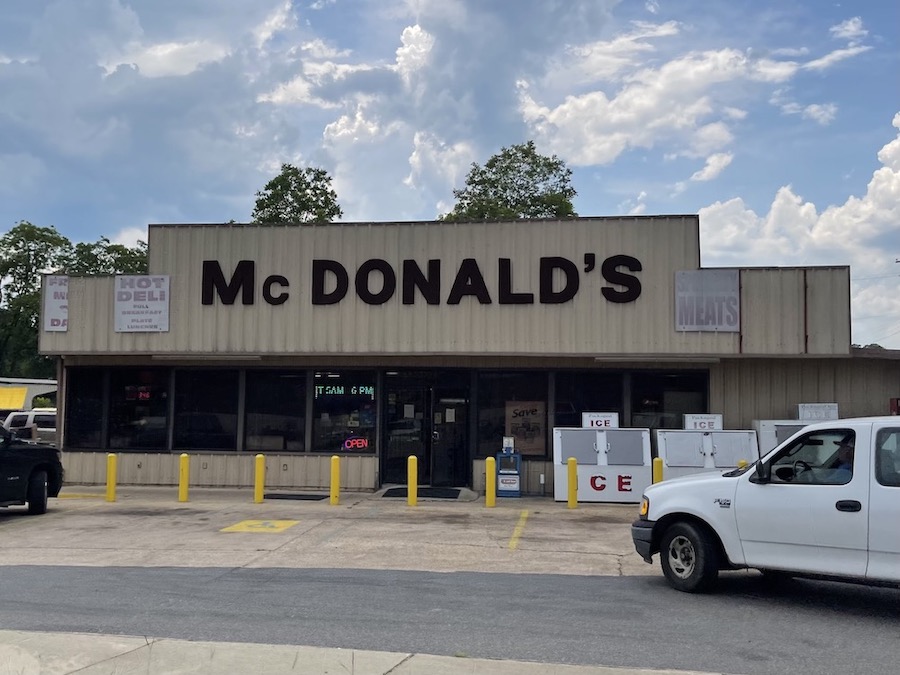 Marcela, Chunktronics, and I drove through more than 25 states on our 27-day food road trip. The number of fast food chains we encountered was astronomical.

We tried to steer clear of fast food available in South Florida. This excludes a McDonald’s in Boston, where I randomly stopped for a two cheeseburger meal late one night.

There were many spots we drove by. Some of which we photographed, and others we weren’t fast enough to capture.

This is not counting Biscuitville, Bojangles, Cook Out, and Wiener Works, which were on the first three days in Fayetteville write-up. While you’re at it, you might want to check out my post about Donuts & Kolaches from this same trip.

Also, be on the lookout for my In-N-Out vs. Whataburger in Texas post; it should be up soon!

Since the very beginning of this blog, I’ve publicly stated when asked that Dairy Queen has the worst fast food burger. It was such a bad experience that I would never give them another opportunity; now, Blizzards don’t count.

We needed gas, and what should show up in our path but a Big Red convenience store-gas station with an adjoining DQ Grill & Chill (3263 Highway 167, Sheridan, AK) complete with drive-thru. So, after topping off the tank, we head through the drive-thru.

We order some cheese curds to share, and Marcela gets her safe meal, chicken tenders and fries. Everything was tried and enjoyed.

On the morning we left out of state, Fred’s dad met up with us. He told me how much he enjoys the burgers from Dairy Queen.

I thought the poor guy’s taste buds were shot and yes’d him until the topic of conversation changed. He was so adamant that I try a Dairy Queen burger that it stuck with me through the trip.

So here we are, the moment of truth is upon me; what am I choosing? Online, I see this description just before it’s our turn to order:

It’s on, the Two Cheese Deluxe Double Stackburger, only the two kinds of cheese and add bacon.

Well, if I’m not a freakin’ monkey’s uncle…WOW! I was not expecting that to happen.

I went from saying this is the worst to this one of the best fast food burgers out there. It’s hard to believe.

I didn’t know that Dairy Queen had been tinkering with their burgers since 2019, and this particular burger made its debut two months earlier. It left quite the impression on me.

Even though the nearest DQ Grill & Chill is about forty minutes away, I’m hoping to drop by for a Slamburger and a Blizzard very soon.

Like most fast food spots, the restaurant’s quality depends on the operator. Hardee’s is no different, but you can increase your likelihood of success if you stick to breakfast. It’s always on point.

Jack in the Box

I have eaten from Jack in the Box in Los Angeles, California; Las Vegas, Nevada; Grapeville, Texas; Nashville, Tennessee; and now Houston, Texas. All the visits have the same thing in common; I was there strictly for a Sourdough Jack.

Their signature burger comes with bacon, tomato, Swiss-style cheese (what?), mayo, and ketchup on toasted sourdough bread. But I made one mistake this time; I said no tomato.

For me, that changed the dynamic of their faux patty melt. It was now just a burger on toast with condiments.

The moral of the story is, don’t tinker.

The best-selling items on the Jack in the Box menu are the tacos. It was late at night, and we figured it was the best time to eat some tacos.

Then I open the box, and I’m all like, what in the bloody hell is this? Lettuce is my kryptonite, so I steered clear of this.

Chunktronics, on the other hand, loved the tacos; so good for him.

One of our popup events was right across the street from Krystal (9986 US-64) in Lakeland, Tennessee. It had to be one of the hottest recorded days in Memphis history, so the minute we were done, we had Krystal on the brain.

Marcela and I go to Krystal for one thing and one thing only, chiks! We love their Southern breaded and fried mini chicken sandwiches.

The tasty little fellows come with a pickle and some mayo; they’re just perfect. I would have also sold it as a great afternoon snack if it were the afternoon.

Just are we pulling out of the drive-thru, we pulled around to take a good picture of the building, and there it was; a poster promoting a pimento cheese version of the chik.

I was sad for a split second and then remembered I was eating a tasty chik…back to my happy place!

The only time I came across a Roy Rogers restaurant was in the Kendall Turnpike Plaza in the late 1980s. Of course, I was a teenager then and at the mercy of my parent’s food whims.

One night the three of us went for an early dinner at that Roy Rogers location and were left severely disappointed. Over the next ten years, the chain was sold to Hardee’s parent company, and when the dust settled, only thirteen locations were left from a peak of 600 years earlier.

It was cool to encounter one of these Roy Rogers promise posters since I own one of the original frames in gold.

I fell asleep on our drive from Boston to our stopover in Niagara Falls. When I woke up, the sign for the upcoming travel plaza listed a Roy Rogers restaurant. This was the Patterson Travel Plaza in Patterson, New York.

Currently, there are over 42 locations in Maryland, New Jersey, Pennsylvania, Virginia, and West Virginia, a bunch of which are in travel plazas.

I couldn’t decide what to get, so I went the Double R Bar Burger route. This is a quarter-pound beef patty on a Kaiser roll (my least favorite burger bun) with American cheese and Smithfield ham.

The fries reminded me of the original fries from Wendy’s and were slightly over-salted, which was ok cause I was more interested in the burger.

Even though it was on a Kaiser roll, even though it’s a frozen patty that is NOT cooked to order…my thought was that it’s not bad for a burger from a travel plaza. I can’t imagine going out of my way to track down a Roy Rogers restaurant.

I wasn’t feeling nostalgic. If not, the Roast Beef sando would have been my lunch choice, but who knows? Maybe there will be a next time?

I was familiar with Sheetz Convenience Store from their appearance on USA Today’s 2021 Best Regional Fast-Food Chains. There are locations in Maryland, North Carolina, Ohio, Pennsylvania, Virginia, and West Virginia.

We were driving through Virginia when I saw a sign for Sheetz (10036 Sliding Hill Rd, Ashland) on the next exit. The timing was also perfect for filling our gas tank.

While Marcela and Fred went in to investigate, I stayed at my usual post at the pump, taking care of business. Then, she sent me a picture of the kiosk and asked what I wanted, a burger!

If I was craving a burger, Sheetz is not where I’m heading to fulfill that yearning. BUT, if I’m on the road and want a quick fix burger, you’ve found the place.

The burger was a one-and-done for me. Now, the Vanilla Gobz, their version of a whoopie pie, was off the charts.

Thanks to my high school bud Jay for letting me know that the Vanilla Goobz is the thing to get at Sheetz. He was one hundred percent on the money.

While we waited for Marcela, we drove around Terre Haute, Indiana, and made the most obvious of stops, White Castle. Fred had never tried a real deal slider from White Castle.

I was ecstatic to be the person facilitating this happening. But, unfortunately, we also ate a chicken slider which was no match for the original.

Fred thoroughly enjoyed his first White Castle slider experience. Alright, so maybe we ate three original sliders each, but you get the drift.

Marcela wanted something to eat in Ruston, Louisiana, so I suggested she try Zaxby’s. We’re in the drive-thru, and she asks for a salad. Yes, a salad.

At least she wanted some pickle chips too, which meant I could jump into the food fray.

More from this Road Food Trip