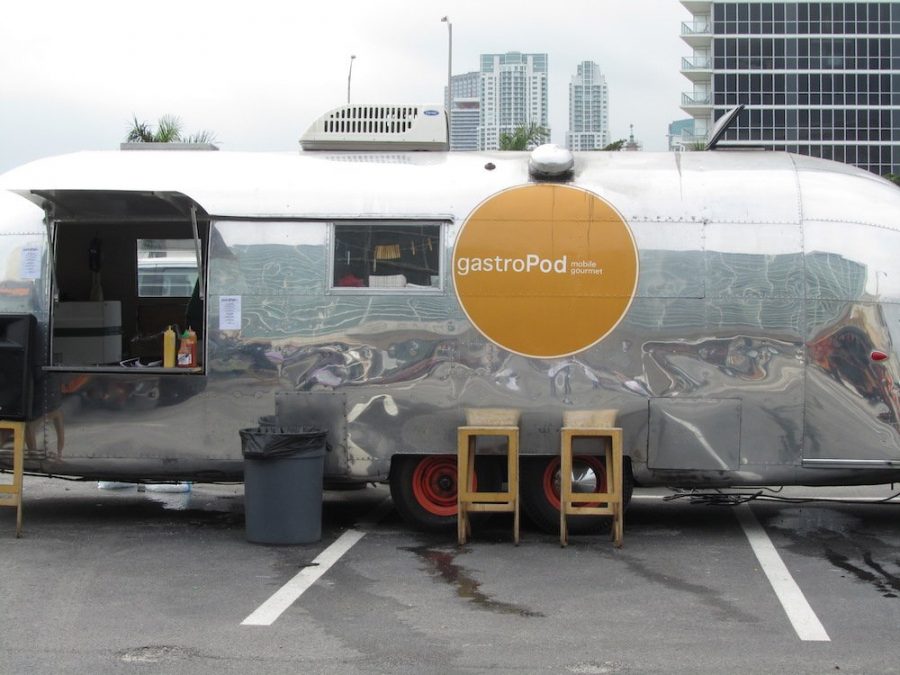 It’s been years since gastroPod existed in any form but at one point, it was the center of the street food & food truck movement in South Florida.

These days you can find its creator Chef Jeremiah killing it with his Detroit-style pizza, Square Pie City.

On Fridays, he sets up at Babe’s Meat & Counter, who has a burger that I believe is influenced by gastroPod’s iconic Mo’ Betta Burger.

The gastroPod is gone but luckily, I’ve still got a bunch of food pictures to share from its mobile version in 2009 and its permanent outdoor spot in 2015.

December 7th, 2009 – In a city where it seems hype goes a lot farther than substance, it’s great to run into the real deal. Chef Jeremiah and his gastroPod Mobile Gourmet seem to be on their way to unleashing a whole bunch of awesome stuff Miami’s way. I was already familiar with Chef Jeremiah because of the Cobaya blog. The menu below is a work in progress, but it’s off to a great start.

The first thing I tried was the Old Dirty Dawg. The Dog was served with “Stupid Slaw” on potato bread. The menu says, “maybe mustard if you’re nice.” I didn’t get mustard, hmm…did I mention the hot dog was made of short rib? Yeah, you need to get on this; it was way good.

Next up was the Sloppy Jose on white bread. I didn’t find Jose too sloppy, but I did find him irresistible and also muy bueno.

Batting third was the Pulled Pork Sandy. The pork had a great smokey flavor. Great taste, loved it.

And finally, the Triple Decker Slider Burger on potato bread. A burger stuffed with pork belly? Damn right, and it was awesome (although some cheese couldn’t hurt anyone).

Right when I was about to leave, I ran into Smurphio (from local band Afrobeta). We attended junior high together back when hair metal was in season.

SIDE NOTE: Actually, Smurphio taught me how to play the main riff for Poison’s Talk Dirty to Me on guitar in one of our school’s hallways.

After catching up, I said my goodbyes to the gastroPod as he went to place an order. No doubt, he didn’t leave disappointed.

gastroPod finds a home in Wynwood

I was talking about my first encounter with Chef Jeremiah and his gastroPod. The opening of the gastropod ushered in Miami’s Street Food Movement and later on what would become the city’s Food Truck movement.

Soon afterward, the food that made that movement hot was getting lost to the newer folks putting the $ in front of producing quality and exciting fare. The guy who started it all took a backseat to the circus it had become. Jeremiah was doing his thing quietly with dinners and brunches here and there.

Next thing you know, the gastroPod was gone. It was sad, really, and I couldn’t bear the thought of the Mo’ Betta Burger being gone.

In true Jeremiah fashion, he recently reappeared with a new version of the gastroPod. Gone is the airstream trailer, and in its place is a converted shipping container that houses a fully functioning kitchen.

But wait there’s more….it’s a permanent spot in Wynwood. Yes, there’s seating and even a few parking spots. It’s within walking distance of Wynwood Kitchen and Panther Coffee to kinda give you an idea of its location. The food, of course, did not disappoint, but then again, I didn’t expect anything less from gastroPod.

You should also probably check out this set of gastroPod pictures by Frodnesor.