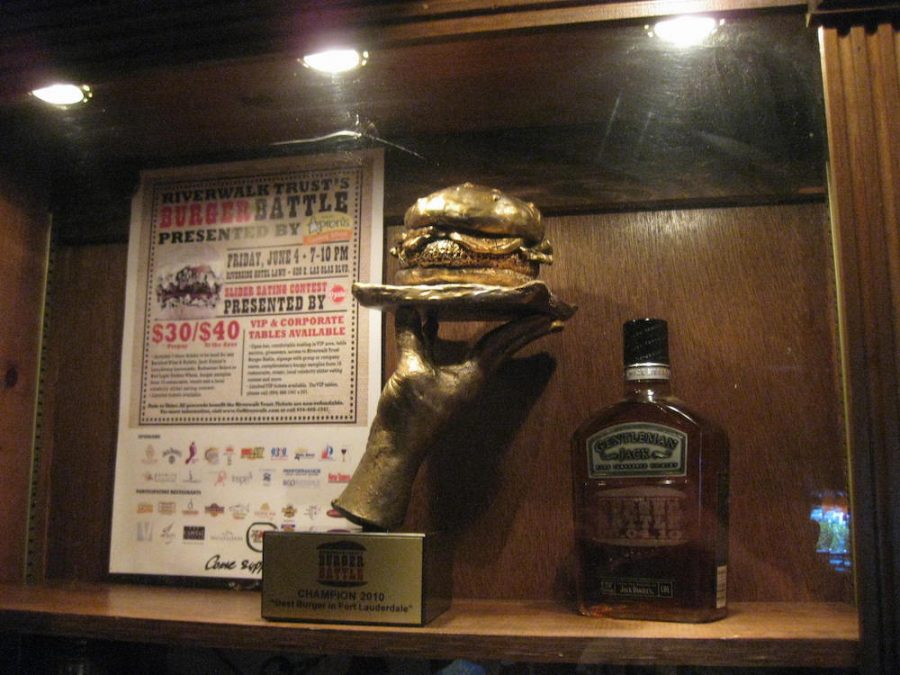 I had never been to Georgie’s Alibi (2266 Wilton Drive, Wilton Manors) near Fort Lauderdale. The place was cool; I expected some dive bar in my mind.

There’s nothing wrong with being a dive bar; I love them. Plus, they’ve got a great burger which is part of my neverending burger quest.

Georgie’s Alibi Monkey Bar has a pretty extensive menu including their two Best Burger from the 2010 and 2011 Riverwalk Burger Battle.

July 9, 2010 – Georgie’s Alibi won Best Burger (a Cinderella story type victory), their words not mine at the Riverwalk Trust Burger Battle. That comment is funny because Georgie’s is a gay bar, restaurant, and nightclub all rolled into one.

I found my way to their glass cabinet near the restaurant’s kitchen to look at the trophy. Since the inaugural Riverwalk Burger Battle, I had not seen the trophy, and it’s just as beautiful and possibly better close up.

When I was judging at the Riverwalk Burger Battle, I had tried a quarter of a burger. This time I was ready for the whole shebang. The Champ Burger (given its name after the big and unexpected win) is topped with American cheese, chipotle aioli, and caramelized onions.

What’s important to mention here is that the onions for the Champ Burger are cooked in butter and bacon fat. Yup, I know, I know! But, those combinations work well together. I enjoyed this burger as if it was the first time all over again.

Sure, fries were served with the Georgie’s Alibi burger, but they became a non-factor once I took one bite of this guy. As I’m sure, you’ll find out too, whenever you eat one.

May 5th, 2011 – Georgie’s Alibi would 2-peat at the 2011 Riverwalk Burger Battle. Georgie’s could have gone the lazy route and submitted the same burger as the year before, but this time they went with The Knockout.

This fella had roasted jalapeño cream cheese, roasted garlic mayo, and bacon-onion jam on a brioche roll. So freakin’ good.