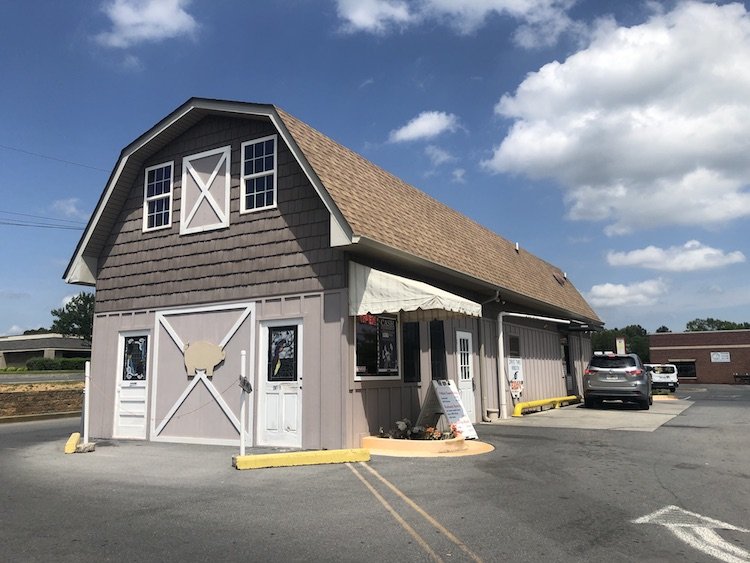 I noticed the Grandstanz (1052 Red Bud Rd NE, Calhoun) farmhouse building next door to the gas station we’re at with a billboard that says “Ain’t No Better Biscuit Burger or Fries.” We had stopped for some gas in Calhoun, Georgia, on the way to my book signing road trip’s first stop in Kentucky.

My wife Marcela and I had just eaten at Mac’s Drive-Thru in Gainesville, and even though it seemed like a slam dunk, I opted out. Marcela, on the other hand, is the voice of burger reason. She says we’re here now, and we should give it a try. She was right.

Sometimes I need just a little arm twisting to do things.

I Skipped The Grandstanz Drive-Thru

There is a drive-thru, but we head inside to share a burger and anything else that might be interesting. The inside isn’t large and probably seats about 20 folks, with most of the seats lining the windows with a counter.

The order is simple: a Grilled Dawg with homemade slaw & chili and a pimento cheeseburger with fresh-cut fries. We agree to split everything, but Marcela ends up going heavy on the Dawg while I become enamored with the burger.

At first, I thought they had served me a plain burger. Instead, it comes partially wrapped and ready to eat.

When I picked up the heavier-than-I-thought sandwich, I squeezed it, and out came the pimento. Marcela only wanted one bite, which meant I could hoard the rest.

The burger tastes like all the great ones I’ve eaten in small towns where the locally sourced beef comes from somewhere nearby. One last thing, the fresh cuts are a must-order. A chili and cheese version of the fries must be out of this world.

I hope to stop here again someday, but the next time I’ll come hungry.