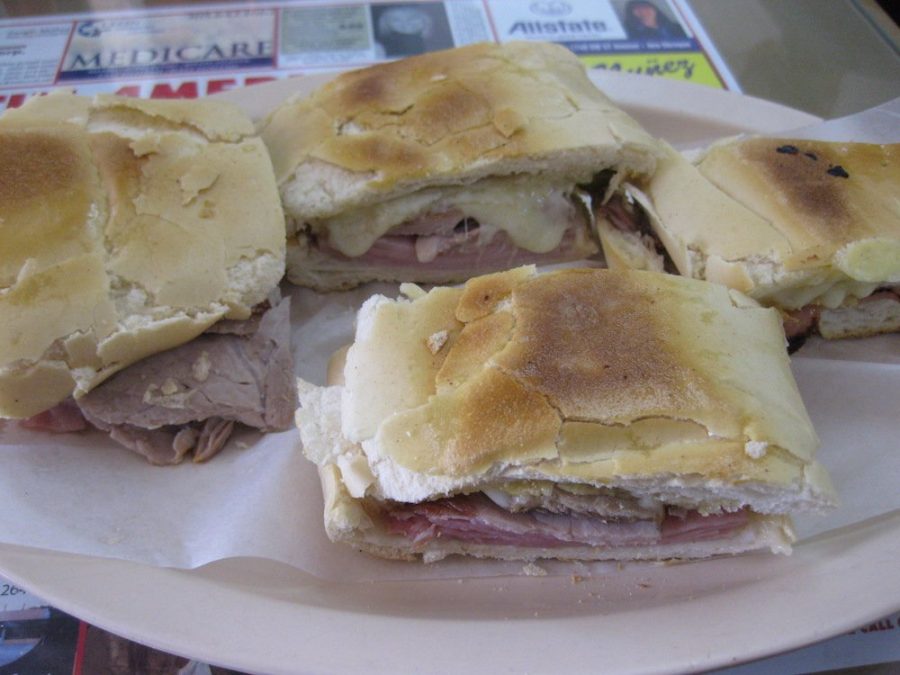 When I have a friend come in from out of town, they ask me about the sandwiches available at Cuban restaurants and cafeterias. There is always an extensive sandwich selection at 99% of Cuban places. I grew up around this and have never given it a second thought.

It’s easy for me to zero in and order, but I can imagine it would be overwhelming when you don’t know what these sandwiches are. Plus, not speaking Spanish doesn’t help.

How to know when you’re in the right spot for sandwiches? They have a dedicated sandwich station visible to all who enter where the magic happens.

The number of questions I got on this topic made me think I should write something about it. So here it is, a guide to help and educate folks a little about the more popular sandwiches on the Cuban restaurant menus across Miami.

On a side and partially related note, Cuban Sandwich flavored chips are no good.

It’s almost like a dummies guide, but since this is Miami, it’s for mongos.

You will find different variations of this sandwich around town.

My personal favorite is ham, Swiss cheese, ham croquetas & mustard on a Medianoche roll. Most frita joints have killer versions of this sandwich.

The Cuban Sandwich is the most prominent and known sandwich on this list. The Cuban Sandwich (not a Cubano unless you speak excellent Spanish or want to sound like a tourist) includes sweet ham, roast pork, and Swiss cheese on toasted Cuban bread with mustard and pickles.

A real deal Cuban Sandwich must be pressed to get that vital crunch on the outside of the bread. But, of course, if you’re in Tampa, salami is also part of the equation.

You put your sandwich together, cut the crust off (well, at least I do), brush the buns with butter, close it up and toast over burners on your stove.

The two most popular Discos to make are ham & cheese (mostly it’s Swiss) and guava & cream cheese. This is probably the most difficult sandwich to find at a restaurant.

Why? The amount of preparation time.

Let’s correct a problem I see on many restaurant menus, it’s Elena Ruz, NOT Elena Ruth. You can read about Cuban socialite Elena Ruz, the creator of this sandwich, here.

The original version is cream cheese, strawberry jam, and slices of turkey on Medianoche bread. However, I’ve seen variations where the Medianoche Bread is replaced for anything white or Cuban bread to even a Cuban pastry.

This is my standard Frita Cubana explanation:

It’s a mix of ground beef (sometimes chorizo or pork is added), seasonings (paprika for sure), julienne cut potatoes or potato sticks, diced raw onions, and ketchup (rumored to be tomato paste, not ketchup in Cuba) on a Cuban roll. It’s cooked on a flat top and not grilled over an open flame.

A bunch has changed since I wrote about the Frita over ten years ago, and chefs are now running wild with their interpretations.

To eat a great Frita, check out my Top 10 Fritas in Miami list.

Also, adding American cheese is optional but frowned upon by folks who ate fritas in Cuba. It’s akin to a slap in the face.

WARNING: Do not eat them at Cuban Pizza joints; they are horrible nine times out of 10.

You may not see Frita Cubana a Caballo on the menu, so it’s almost like a secret menu item addition. If you ever see the word Caballo on a menu, there is a fried egg on the dish.

You never say No to a Caballo; you got that?

What is the literal translation of Caballo? It means horse. How does this make any sense? It beats me; I’m just here to eat.

I’m going to have to agree and say, yes, this does look ridiculous.

How can a cracker withstand the weight of all of those ingredients (roast pork, sweet ham & Swiss cheese)? The answer? Don’t count out Cuban Sandwich Physics which breaks all the rules.

The name Galleta Preparada translates to a prepared cracker if you were wondering.

You’ve had the Cuban Sandwich and want something similar but yet different. I got you; you need a Medianoche in your life.

It’s the same ingredients BUT on a sweet egg dough bread; it’s my personal favorite.

Medianoche translates to midnight, and this guy is the perfect midnight snack.

It is also known as the Calle Ocho Sandwich by Versailles & La Carreta restaurants.

The Miami Sandwich is ham, turkey, bacon, lettuce, tomato, Swiss cheese & mayo on Cuban bread. I eat mine without the Lettuce and Tomato.

This sandwich is even better than it sounds.

Pan con Bistec is a Steak Sandwich, and its preparation varies from restaurant to ventanitas.

The standard prep is with grilled onions, lettuce, and tomato. In addition, you will find ketchup, julienne potatoes, potato sticks, and mayo added by some spots.

I dig the grilled onions, julienne potatoes, and mayo combination if you can find it, or you can, of course, request it that way.

The ingredients in this one are limited to roast pork, onions, and Cuban mojo (sour orange-based marinade) on Cuban bread.

You might find chicharrones added as a topping on the sandwich in some places. Do not fight it, lol.

The Pan con Minuta is most easily described as a fried snapper sandwich. Pan is bread, con means with, and minuta refers to how they cut the fish during preparation; it’s a butterfly cut.

The sandwich still has its tail attached, and it adds to the integrity of the sandwich.

I’m gonna go out on a limb here and say that some people eat the tail (actually, I know they do).

Pan con Tortilla or an Omelette Sandwich are generally not pressed. However, most spots will have you add the ingredients you like to the omelet.

The standard is ham, Swiss cheese, and onions but may also include peppers, potatoes, and chorizo.

All are good options, and you need to find the right combinations for your taste buds.