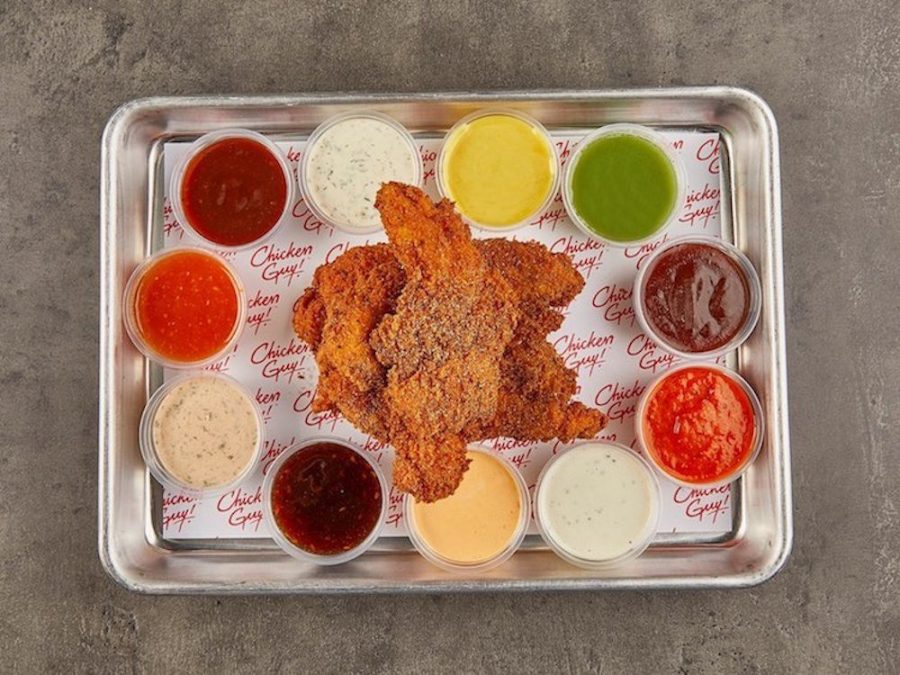 “It’s antibiotic hormone-free chicken. We brine it, we dredge it and we hand dredge the chicken. We pressure fry it and it’s a crispy chicken. Then, we decide if we want to go for heavy sauce, light sauce spicy or traditional sauce,” he explained.

Guy Fieri talking to CBS4 about his tenders

407,560,8180 combinations are possible by mixing the 22 sauces. On their website, the sauces are conveniently laid out in three categories: Guy Favorites, The Classics, and Hot ‘N’ Spicy. One more thing of note, Guy’s Special Sauce recipe is available on Rachael Ray’s site.

The closest one to my home, the Dadeland location, will be found at Terrace Dining, 2nd level. Unfortunately, the official opening dates for all three have not been announced, but as always, I’ll update this page as soon as there is one available.

I’m minding my business heading to drop off Marcela at Orange Tree Antiques When I see a bright shiny Chicken Guy (818 S. Orlando Avenue, Winter Park) sign with a drive-thru arrow. The chicken tenders gods had placed this spot in my path, which meant a detour was imminent.

A friendly face hands me a menu then directs me to the drive-thru entrance. The menu size was manageable, but the selection of sauces (22 of ’em) added some pressure to get this order right.

A fella walks to take our order on a pad, and I’ve got a pretty good idea of what I’ll be doing. So let’s do three tenders, fried pickle chips, fries, and a Bourbon Brown Sugar BBQ Chicken Tender Sandwich.

Buttermilk ranch, bleu cheese, and a honey mustard were the chosen sauces for this outing, even though I was tempted to order all 22. Instead, I played it safe but wanted to get a feel for the common ones before doing the deep dive into specialty sauce territory.

Before we get into some tender talk, let’s discuss the rookie mistake I made first. The fried pickle chips already came with some buttermilk ranch; I doubled up by mistake. Buffalo could have easily filled that spot. Now I’ll never know what could have been.

The fries and pickle chips were both right on the money. Skip the ketchup on the fries; they’re good as is.

The pickle chips’ breading had some cracking issues, but hey, we’re all a little crazy sometimes. However, dipping the pickle chips in the buttermilk ranch is a winning combo.

Man, oh man, those chicken tenders were killer. The breading was crispy, and the chicken was moist and not dried out. It was at this point that I realized I had messed up.

My overthought process for selecting the tenders hurt my meal. Look, the tenders by themselves are delicious, but I should have at least chosen a curry mayo or cumin lime mojo to next level this lunch. Again, it was my fault. I will carry the guilt to the end of my days; that’s my internal food judgment talking.

While I did sneak the first bite of the Bourbon Brown Sugar BBQ Chicken Tender Sandwich (pepper jack, bourbon brown sugar BBQ sauce, special sauce, slaw, pickles & BBQ kettle chips), it was Marcela who enjoyed the rest of the sando.

I’m hoping to get back soon to make a dent in sampling a few more of those Chicken Guy Signature Sauces. Based on the tastes of the ones I did try, I’m expecting great things.