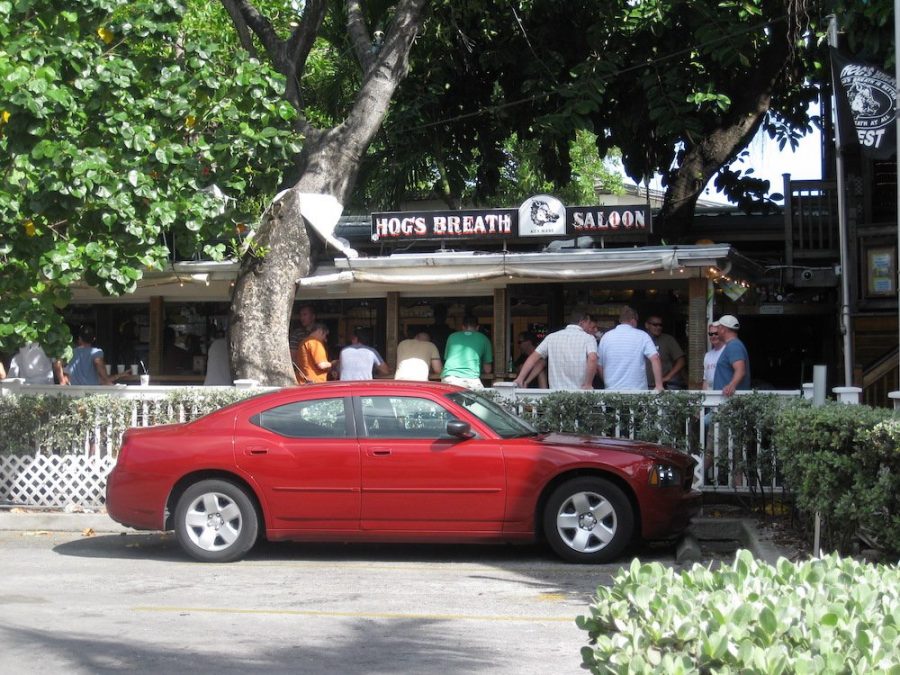 It’s been more than ten years since my first and only visit to Hog’s Breath Saloon in Key West. Not too long after I wrote about them, I received a gift in my P.O. Box.

The owners had read what I wrote about their Hog Dust seasoning and sent me a bottle as a gift. A very kind gesture that, even all these years later, I still appreciate.

By the way, there’s a live cam at Hog’s Breath Saloon that streams 24 hours a day. Just remember that before you do anything stupid or intentionally dumb.

May 2nd, 2009 – A few years back, I accompanied Fred on a work assignment to Key West. The one thing we knew for sure was we were going to go to Hog’s Breath (400 Front Street, Key West).

When we finally get down there, we realize there is no way that Fred’s refrigerated delivery truck will fit in any parking spaces. So we ended up eating at House Of Music (which I believe has since closed) in Big Pine Key.

A few months later, Marcela and I are walking down Duval Street while I’m telling her about what happened when Fred and I attempted to hit up Hog’s Breath last time. So even though we were headed elsewhere (Pirate Soul Museum) at the moment, we detour to the good ole Hog’s Breath.

If you’ve never been here, it’s got a laid-back environment.

There are 2 bars. The first is open-air with the stage right near it. A dude is performing with his guitar some cover songs (he sounded pretty good).

The second bar is non-smoking. A store that sells everything from their signature Hog’s Breath Saloon t-shirts, hot sauces to towels is beside it. It’s a little darker, which means that is where we’re going.

We take our seats at the end of the bar, next to a boar and our bartender Slim (nice guy, alright, he’s a cool guy), takes our drink order. Marcela orders a Heineken, and I get a Yuengling.

The other people sitting at the bar had different beer tastes than us, though.

I look over the menu, and I decide on getting the potato skins and the hog burger with cheese and bacon. Marcela is now looking at me in disbelief as we had just eaten at Cheeseburger.

I suffer for my craft; what’s worse is I didn’t stop here. After Marcela finishes her beer, she gets a Hogarita (one of their specialty cocktails), which she enjoys.

By this time, the burger and skins are here. Chili, cheddar cheese, scallions, and ranch smothered the potato fellas. The potato skins were pretty good.

The Hog Burger was also excellent. Hog Dust, a seasoned salt with some heat, is on the burger and fries. The seasoning is so good that I decided to buy a bottle.

Of course, I forgot to do that.

Next time we’re in Key West again, I will:

*We hit up the Rum Barrel restaurant after Hog’s Breath Saloon.