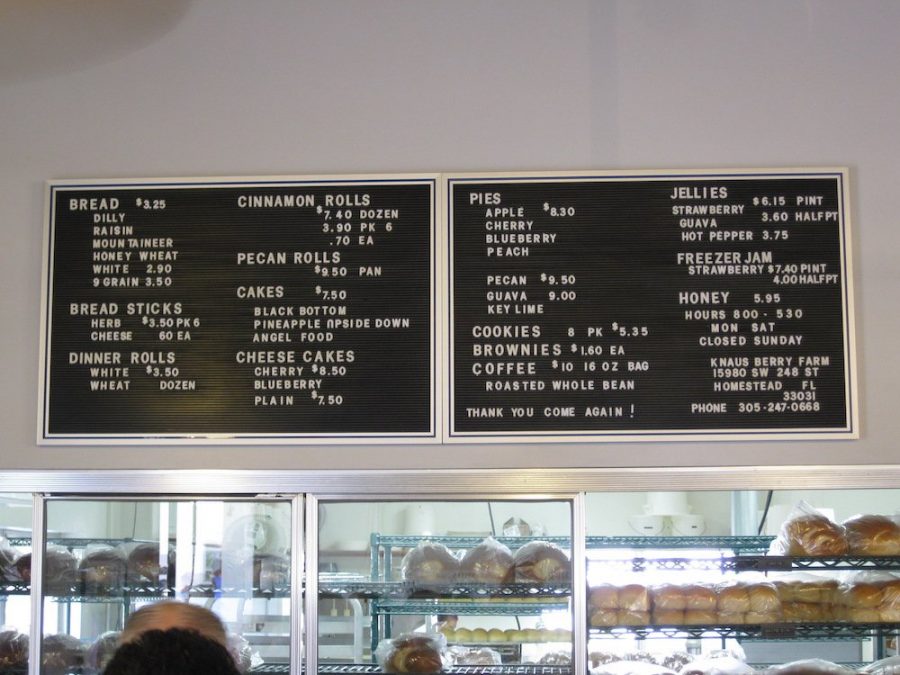 Whoa…I felt like Keanu Reeves after this Homestead adventure.

What started as a trek for Fred and Jarce to check out Knaus Berry Farm ended with all of us stuffed. We went back to our homes and regrouped to watch (or play in Jarce’s case) the Burger Beast Softball Team get shellacked. But let’s start from the beginning.

I receive a text from Fred at 10 AM asking if we’re still going to check out the Mexican Market. I have no clue what Mexican Market he’s talking about. He meant Knaus Berry Farm, who are not Mexican but Dunkers (German baptists who are often confused for Amish). I call up Jarce, and he doesn’t answer. I hang up, and he’s returning my call.

The Plan is Set

So the plan is, first pick up Jarce and Luis (roommates in a Bert & Ernie sort of way, just kidding), and then we pick up Fred at his friend’s barbershop. We originally considered going to Coral Castle, but for $9.75, I don’t think so.

As we’re arriving at Knaus Berry Farm, there’s one thing on our mind; we’re all starving. The problem? The line at Knaus Berry Farm is ridiculously long, with over 30 people in line to buy fresh baked goods. We don’t want cinnamon rolls that bad.

After a group meeting, and we’re on our way to Cracker Barrel. We pass a Keg South on the way there, hmm… We call up John, and he’s a go, to meet us there.

This is probably the only time I’ve been to a Cracker Barrel (155 N Krome Ave, Florida City) and have been seated right away. As we’re looking over the menus (breakfast and lunch), I suggest we try hitting up Keg South right after. I am met with absolutely no resistance. The plan for a Homestead adventure begins to be fleshed out.

John will only be joining us for the Cracker Barrel leg of this as he needs to get back to work. Everyone places their order.

While waiting for our meal, Fred and Jarce play one of those little games with pegs (I have no clue what it’s called). They also bust on John, who is not here yet. Fred (who is absolutely horrible at games) and Jarce both claim that they left one peg. I’m not buying it.

So for your amusement and mine, I asked Jarce to try it again on camera. Before you watch it, I want you to know that he said anyone who leaves three pegs is of average intelligence. John had just arrived at this point, so you will hear all of us making comments.

A couple of days ago, some dude told Jarce that he needed to slow down eating bread and rice. The guy hadn’t seen him in almost a year. The waitress brought him a Diet Coke instead of the regular Coke he asked for (she must know something), lol

The food overall was good. At Cracker Barrel, they serve some great comfort food but nothing really extraordinary. The burger, on the other hand, was pretty average. No doubt a frozen patty, and I did expect a little more from them.

Before we leave, I ask the waitress if we can get a picture of Fred laying inside the fireplace.

She was actually going to say yes, and then I quickly added, and turn it on! She claimed we were mean, and I’m totally OK with that.

We say our goodbyes to John (not before he puts Jarce in a headlock for what he said about him) and head out to try Keg South in Homestead.

Keg South has three locations: Kendall, Pinecrest, and Homestead. They are all independently owned and operated. There are differences in their menus, but they all have a Keg Burger. I vouch for the Kendall location, but for me, Pinecrest is really the way to go. Their wings are larger and way better too.

This brings us to Keg South Homestead, which I needed to try to complete the keg triangle. First thing’s first, Jarce runs to the restroom while Luis is falling asleep. Meanwhile, Fred and I are looking over the menu. Once Jarce returns, we decide to order some appetizers and one burger for the four of us to try.

Our waitress is quite the character. In all my years of eating at restaurants, I’ve never had to negotiate for what I wanted to eat. Every time I asked for something, she tried to change my mind by suggesting something else. I believed there might be a hidden camera somewhere.

Our Order at Keg South

We order the Onions Petals, Chili Cheese Fries, and some Wings. You have the option of grilled or fried so 10 fried and 10 grilled it is. She suggests we order the sauces on the side. Sounds like a good idea. Fred was leaning toward the Honey Apple, and Jarce & BB want the Mt. St. Helens.

Luis is cool with whatever we choose as long as he gets blue cheese, although he doesn’t like the scorching stuff. Too bad for him, huh? Jarce orders a pitcher of Heineken.

It’s time to order the burger. The 1/2 pound Keg Burger with cheddar cheese, bacon, and mayo is what we want to order, but we have someone who disagrees. The waitress is insistent we order a different burger. The burger she is trying to push on us has bacon, cheddar cheese, bbq sauce, and onion pedals.

Guess what? I don’t want that burger. I repeat to her that we want the 1/2 Keg Burger with cheddar cheese, bacon, and mayo.

Honestly, it was surreal. Unbelievable even but then the chili cheese fries arrive.

The fries were covered in sour cream, jalapeños, onions, cheese sauce, and chili (with beans, unfortunately). This was the best thing was had, hands down. The wings arrive and take a wild guess? The sauce is on them.

Fred calls our waitress over and asks why the sauce is on the wings, and Luis reminds her about the blue cheese. Something she actually suggested to us. The waitress tells him I asked for them that way. Lol…I make the call at that moment to cease all interactions with her.

The onion pedals arrive, and they’re just your stand onion appetizer stuff. The wings, well, they were horrible. They have an odd taste. The sauces on them (just like I ordered, lol) are good. We realize if we grab the Honey Apple wings and dip them in the Mt. St. Helens sauce, it makes a better sauce. It still won’t save the flavor of the wing. Plus, it doesn’t stop Fred from eating them.

The burger arrives to our specifications (thank goodness). One look at it, and I know 2 things:

One bite and I’m right. Average tasting burger at best but the guys seem to disagree. They ask for the bill, remember I’m not on speaking terms with the waitress. Finally, we’re free. We’re standing around outside and we notice this sign.

Famous Burgers? Best Wings in the World? What restaurant are they talking about? Plus, Luis never got his blue cheese.

The Knaus family has run Knaus Berry Farm (15980 Southwest 248th Street, Homestead) for over 50 years. I had heard about Knaus for years but have only been purchasing their baked goods for about 5 years. It’s a good way to spend a few hours in the afternoon with the family.

You can go out back and pick strawberries or buy strawberries that have been picked for you. The shakes are solid, but some rave about them; Jarce was not one of those people.

What I do love are their baked goods. This stuff is crazy good, from the honey & homemade jams to the black bottom cake & cinnamon rolls. You need to make an effort to check this place out; you won’t be disappointed, at least I hope not.

This was probably the most uneventful part of the day. The fellas bought some rolls, and then we took off. I dropped everyone off then a few hours later; I headed out to Tropical Park to watch the softball team I was sponsoring, the Burger Beasts.

About the Burger Beast Softball Team

I worked with Jarce, Andy, Joseph, and Robert, who were 1/3 of a softball team that was starting up. Andy asked what I thought about the idea of naming them the Burger Beasts. I did not see that one coming, and I loved the idea.

The team never won one game and mostly lost by blowouts. Well, you can’t win ’em all! Actually, there was one win, however, when the opposing team no-showed. My thoughts were, no comment, lol