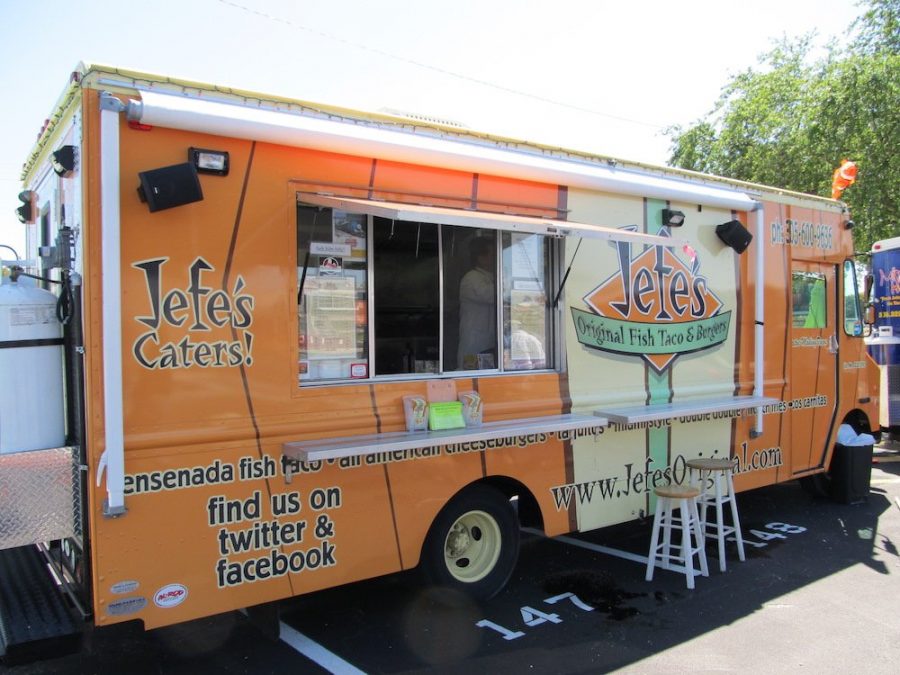 I’ve openly proclaimed that the Rolling Stove was my favorite food truck in Miami, but a close second was Jefe’s Original Fish Taco & Burgers. Those were the two food trucks you could always find me at while I was posting pictures on social media land.

Jack, the owner of Jefe’s, created arguably the most important food truck event in the early days at the Johnson & Wales campus. BTTR (Biscayne Triangle Truck Roundup) drew thousands on a Tuesday night and really set the tone for a well-run and curated event.

Marcela absolutely loved the fish tacos and me, well I was more than enamored with Jefe’s Double Cheezer burger and fresh-cut fries. His patty melt on sourdough bread was another favorite of mine.

A few years after the food truck launch, he opened Jefe’s Soul Shack in North Miami. The food was excellent as always, and he added a killer pastrami sandwich and crispy potato wedges to his food arsenal.

Jefe’s won a couple of my Burgie Awards. In 2013 he took home Best Taco and, in 2015, the coveted Best Food Truck Burger.

Jefe’s Original Fish Taco & Burgers left a great impression on the folks who supported the Miami Food Truck scene. I have many fond memories of eating at the truck and shooting the shit with Jack about some of the characters in the industry.

He was one of those characters. Jack is out there somewhere now, walking the earth like Caine in Kung Fu. I like the idea of that, and hopefully, there’s a lucky fella out there enjoying a Double Cheezer.

August 3rd, 2010 – I’ve been awaiting the debut of Jefe’s truck for a little while now since “Burgers” is part of his game. Jefe’s is also about the Fish Taco. I’m not a Fish Taco type of guy, but Mango & Lime had one a few days ago.

I had one of Jefe’s Tacos Carnitas. The Tacos Carnitas were double corn tortillas topped with roasted pork, onion, cilantro, and salsa verde.

The taco was served with a side of spicy red salsa that caught me off guard when I tried it. It was spicier than the “Hot” at most places so be careful not to pour it on unless that’s your thing.  The pork was scrumptious, and the toppings were fresh, which made for a great taco.

Let’s get to the burger, not to undermine the taco, which was great, but I was thinking about the *Double Double Miami Style Burger the entire time I was eating it. The Double-Double is 2 patties, 2 deli slices of American cheese on a toasted bun with Jefe’s Boss sauce. Yes, you can get lettuce, tomatoes, and onions if you so desire.

You can choose to have it served Miami Style with extra everything, over the top with grilled onions at no extra cost. Of course, it should be no surprise I had my Double Double Miami Style.

Those of you familiar with West Coast chain IN-N-OUT will notice some similarities in taste to their burger and name. I loved the burger. If IN-N-OUT and Shake Shack had a delicious burger baby, it would be Jefe’s Double-Double.

The Boss sauce is also for dipping their fresh-cut fries (which are served with capers). Jefe’s is a welcome addition to the Miami Street Food circuit. To find Jefe’s Original Fish Taco & Burgers Truck’s whereabouts daily, make sure to check out their Twitter and Facebook pages.

*Jefe’s was issued a cease & desist for calling his burger a Double-Double & changed the name to a Double Cheezer.

October 2nd, 2012 – Vatos will have a home in early 2013 when Jefe’s Original Fish Taco & Burgers Food Truck opens up “Jefe’s Original Soul Shack” (12581 Biscayne Boulevard) in North Miami. The Soul Shack will include an extended menu of the food found on the truck plus some of the specials you’ve come to love, like the Patty Melt.

I’m hoping for the return of the Chocolate Wipeout Cake.

Jefe’s will be the 4th South Florida Food Truck to open up a restaurant after The MexZican Gourmet, Latin House Burger & Taco & the Yellow Submarine (now Rock That Burger). He won’t be the last as Nacho Bizness is currently working on his restaurant in Ft. Lauderdale.

And there’s no need to worry as the Jefe’s Food Truck will still be making its rounds around South Florida.

June 23rd, 2014 – Jefe’s Original Fish Taco & Burgers Food Truck is a little over a month away from its 4th anniversary. Is there any better way to celebrate than with the opening of Jefe’s Original Soul Shack?

Since the day I laid my eyes on Jefe’s Double Cheezer Miami Style Burger, it’s been a burger love affair. Owner Jack Garabedian can confirm that I’ve eaten at Jefe’s all over South Florida.

His usual first question upon spotting me at these locations throughout Miami is, what are you doing here? The answer is, I needed my Double Cheezer fix.

It’s great that folks who have an aversion to food trucks will now have an opportunity to eat from one of the guys who has consistently produced top-notch fare out of his. I have never been served food from Jefe’s that was anything less than excellent, and it’s the commitment to quality that has always shined through. I’ve got no doubt in my mind that he will kill it with the Soul Shack.

What’d I EAT at the Soul Shack?

I always have the Real Deal Fries, so now there’s an option to add bacon & cheese. The fries are fresh-cut and slightly on the real crispy side; no soggy fellas here.

It’s real bacon too, not that pre-cooked nonsense that sits room temperature at supermarkets. If you’re into dipping your fries, then go original, but if you’re looking for that little extra something, then these are the ones for you.

As difficult as it was not to have a Double Cheezer, I was glad that I didn’t. I ordered a Hot Pastrami and a La Raza Burger. The hot pastrami comes on a crusty toasted French bread with pickles & mustard.

The mustard application was a little heavy-handed, but I’m a mustard lover, so I was ok with that. The sandwich comes wrapped in wax paper, as is the custom with Jefe’s burgers also. Great sandwich, and I was alternating between it and the burger, which I had really taken a fancy to.

A Raza Burger You Say?

La Raza Burger is so good that it required the starting of a new paragraph. La Raza Burger is an Angus beef burger smothered with beef machaca topped with cotija cheese, pickled red onion & pico de gallo horseradish crema on a toasted bun. If reading that doesn’t get you motivated to order that burger, you must be on some self-imposed diet.

Fans of lettuce rejoice; there are a couple of salads that I suggest you wash down with a Mexican Coke. Hey, remember you only live once.

It’s going to be tough for first-timers to figure out what exactly they’re going to order, but a Double Cheezer is always a great way to start.