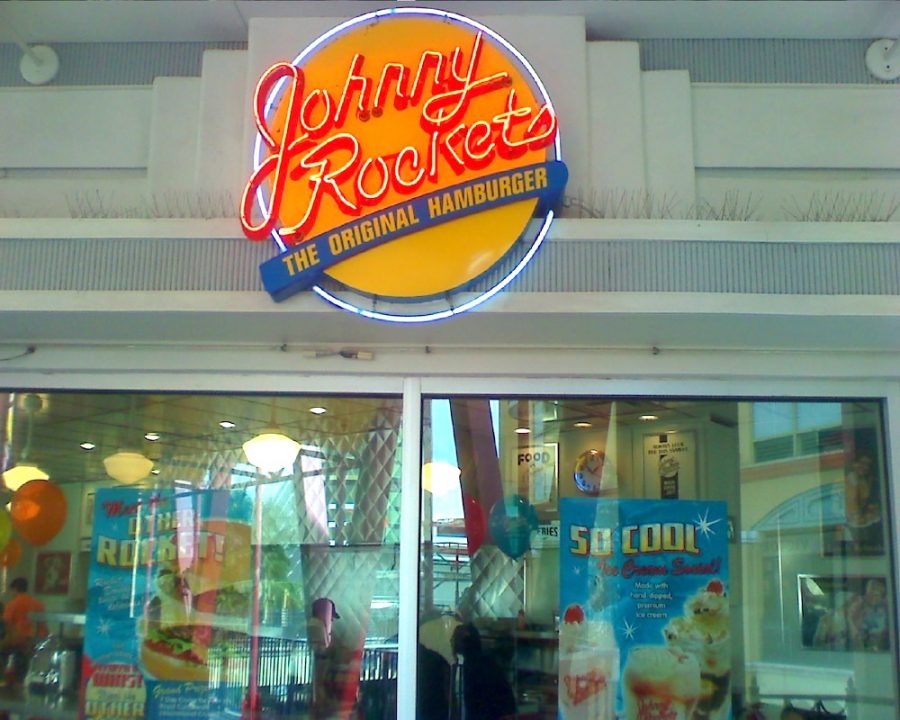 When I first wrote this post there were 11 Johnny Rockets locations in Miami. Currently, there are 14, with thirteen of them located on cruise ships and a last-standing restaurant at Dolphin Mall.

Johnny Rockets was included in my book, All About the Burger. In it, I mention my first experience with eating at one. And below that, you can peruse through that burger adventure at sea.

Johnny Rockets in All About the Burger: A History of America’s Favorite Sandwich

Founder Ronn Teitelbaum said the decor was inspired by The Incline, a diner from his youth in 1940s Santa Monica, California. Paper-jacketed hamburgers, counter seating, and the minimalist menu of burgers, fries, shakes, flavored colas, and apple pie came from the Apple Pan in Los Angeles.

I never ate at Johnny Rockets when it first showed up in Miami. My friends would talk to me about it, but I steered clear of going to the mall where one was located unless there was the added incentive of an arcade.

My first meal at Johnny Rockets was on a Royal Caribbean cruise ship. The booth-type seating was on an outdoor deck facing the ocean with a calming breeze. It made for ideal weather to sit and enjoy burgers, fries, and shakes.

Johnny Rockets at Sea on a Royal Caribbean Cruise Ship

November 27th, 2008 – Johnny Rockets is one of those chains that seem to be everywhere. I had not noticed that there’s one located in almost every mall until recently.

A few weeks ago, when I was plotting out places I would be eating that month, I had decided on Johnny Rockets, but something changed that. I made plans with my parents to go on a cruise with my family.

There are Johnny Rockets at Sea on certain Royal Caribbean Cruise Ships (we went on the Independence of the Seas). The best part is it’s only $3.95 per person, unlimited per meal.

Yes, I couldn’t believe it either (but maybe you knew this, otherwise play along, I’m a simple man with simple pleasures). The menu on the ship is limited, but I was not about to complain.

So they served us a welcome order of french fries with ranch and a plate with ketchup made by someone with too much time on their hands. It was a pleasant surprise especially considering we didn’t even ask for it. So next, I order the Rocket Double and a chili cheese dog.

The Rocket Double has that diner burger flavor which I love in large spurts. It’s two patties with two cheese slices, lettuce, tomato, onions, and special sauce. The cheese had melted ever so slightly onto the grill giving the edges slight crispiness.

Their chili cheese dog (Nathan’s Famous all-beef dog) comes with raw onions, all-meat chili, and topped with grated cheddar cheese. What else can I say but hey, this thing was good. This fella was the perfect lazy afternoon vacation food.

Even though it’s not on the Johnny Rockets at Sea Menu, their chili size (served open face, a burger patty covered in chili, chopped onions, and grated cheddar cheese) is my favorite, but that’s a tale for another day.

Johnny Rockets Hits A Milestone & Its CEO On Undercover Boss

December 26th, 2010 – Johnny Rockets hit a milestone recently. It opened its 300th location at the International Mall, making this their 11th location in Miami. Congratulations on that feat. And next year, they’re celebrating their 25th Anniversary.

A few weeks back the John Fuller, the CEO of Johnny Rockets, came out on CBS’s Undercover Boss. Johnny Rockets sold over 14 million burgers last year, a fact I learned from the show.

You get to see the cooking technique they use, and I loved how serious the dude running the flat top took his job, “a little pink, I’m not impressed.”

There’s also a Johnny Rockets with a full bar in NYC which is interesting. If you haven’t watched it, I would suggest you do.