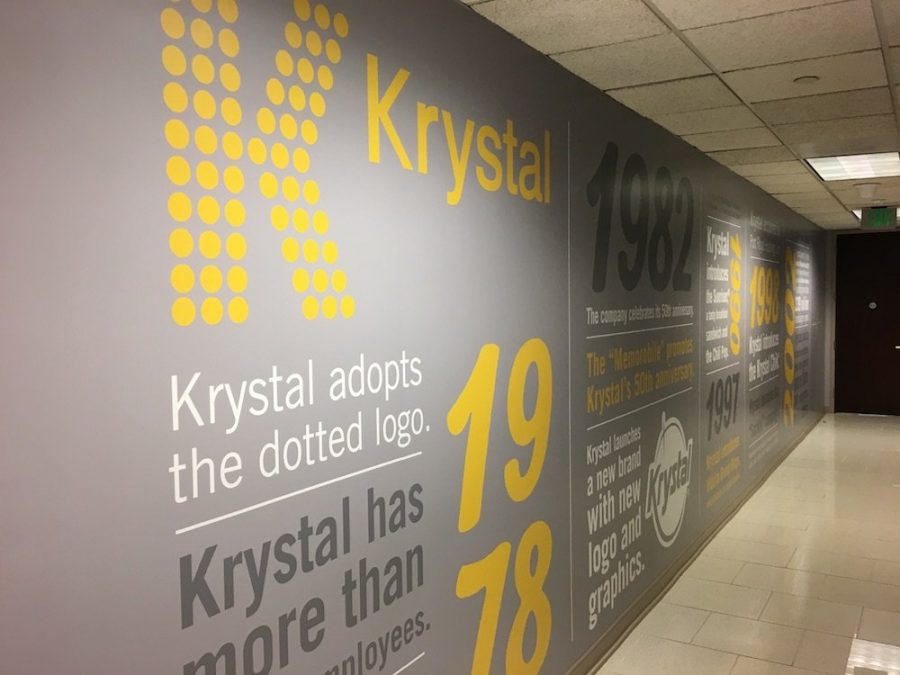 Before I get into my visit to Krystal Burger Headquarters, I’d like to give you some history about the company to get you in the mood.

I know folks who swear by Krystal and others who call it the White Castle of the South. If you’re unfamiliar with their beginnings, they opened their first restaurant in Chattanooga.

Like the hundreds of other clones of the day, Krystal emulated everything about the White Castle System. White Castle would make their name in the Midwest & North East while Krystal stuck to the South.

In the long run, it was a great move cause White Tower, another copycat, did not fare too well when it went head to head with White Castle.

One of the perks of being Burger Beast is receiving invites to the headquarters of iconic food brands like A&W Restaurants, Wendy’s, and White Castle. So when Krystal invited me (my wife Marcela and my friend John) to their headquarters in Dunwoody, Georgia, it was a no-brainer that I would say yes.

I enjoyed the wall with historically significant dates. Also, the caricatures of their Krystal Lovers Hall of Fame members were a nice touch.

We watched an audiovisual presentation on Krystal and its history in their conference room. The next stop was the innovation center, aka the test kitchen.

As you would hope, whenever you visit an Innovation Center, there’s plenty of food to sample. Unfortunately, there were some we could not share since they were in the early stages of development, but the pumpkin spice milkshake was off the charts good. I know, I’m basic, but I love pumpkin spice; what’s a guy to do?

My favorite was the original Krystal slider with onions, mustard, and pickles. If you know me, I’m all about enjoying all food, even fast food in its original form.

Why mess with a good thing?

On our way out after the headquarters visit and lunch, Krystal gifted me this portrait of their slider with my Burger Beast logo. It is now part of my Burger Museum collection.

Krystal Headquarters is not open to the public. But, in case you need to know where it is located: