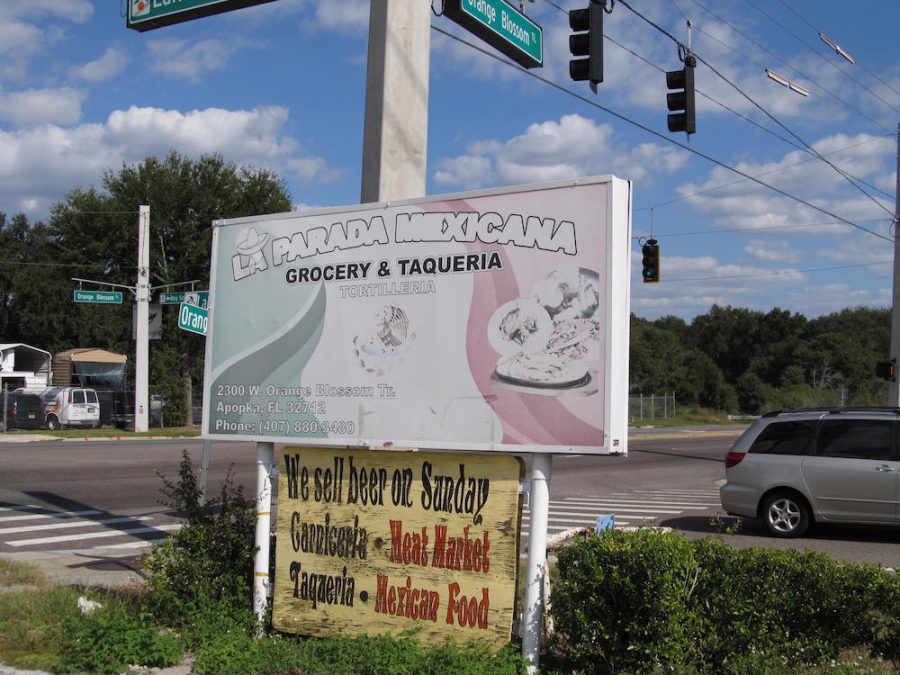 Marcela and I were driving in the Orlando area and decided to see where the road would take us. After a bit of this lunacy, I was thirsty. We walked into La Parada Mexicana Grocery, and there they were, some Mexican Cokes (the fabled Coca-Cola with sugar instead of corn syrup).

I grab one, and my heart sank just as the dude behind the counter tells me the fridges aren’t cooling. This conversation was in Spanish, by the way. He tells me right up the way is another larger convenience store, and I can get a cold bottled Coke there.

I figured I’d walk into La Parada Mexicana (2300 W Orange Blossom Trail, Apopka), buy a couple of drinks, and be out of there in a few minutes. I didn’t expect to find a real deal Mexican Taqueria tucked inside of the joint.

Should I or Shouldn’t I?

So I was at a crossroads….. I’m thirsty, yet I’m also interested in what might be on the menu. Plus, the last thing I need is to get a bad stomachache from some food in the middle of nowhere. Marcela is sitting this one out.

Yup, there are chorizo tacos on the menu.

After ordering a trio of chorizo tacos, I down almost all of my Mexi-Coke while waiting. I can see into the kitchen as they’re making fresh corn tortillas. I’m beginning to think I made the right decision eating here.

The only other dudes eating had some meals from the warming tray La Parada had set up. The staff there doesn’t look half bad, but I’m sticking to my guns.

The children arrive, and yes, they’re not only double-wrapped corn tortillas but beautiful at that. The chorizo was spicier than expected, and I could see the pepper flakes in the meat.

There is also what I’ll call a condiments bar area where you can choose from the usual taco suspects (a couple of different salsas, diced onions, and cilantro).

I added some onions and tried both salsas but preferred the naked version to the loaded.

Those tacos hit the spot. I considered ordering a few to go, but I didn’t want to push my luck. I had planned to buy some homemade corn tortillas as they’re available for sale, but I totally forgot.

Once I saw they had 1/2 liter bottles of Mexican Coke, it made me refocus my energies.

I now regret not trying the barbacoa taco, al pastor taco, or even the torta. I may never get another chance to eat here again, but if I do, at least I’ll come mentally prepared.

UPDATE: I have returned a handful of times for those chorizo tacos; damn, they’re still good!