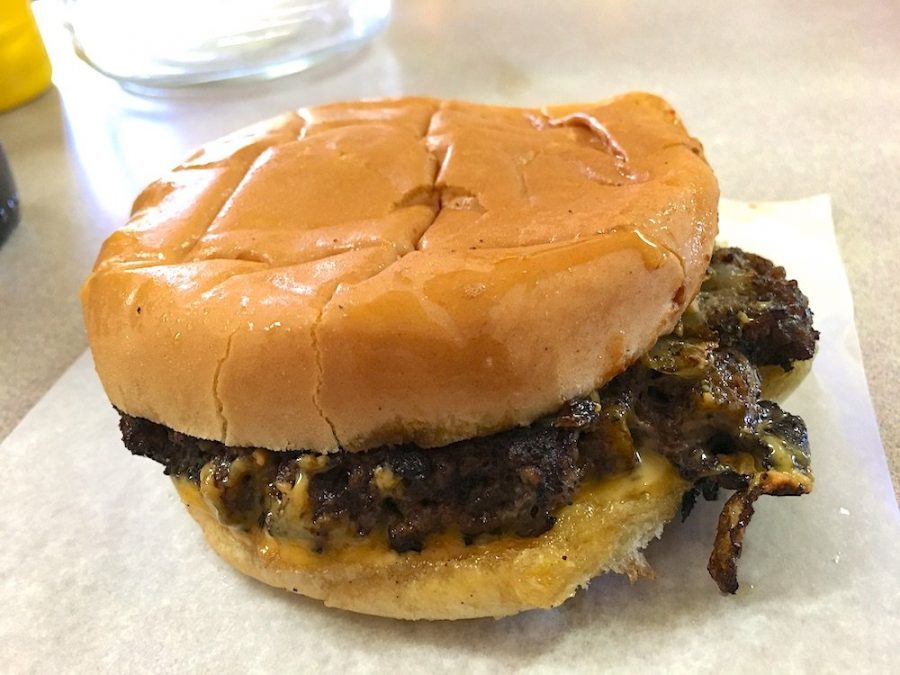 When I texted George Motz that I was in Lexington, Kentucky, for a few days, he told me to rush over to Laha’s Red Castle Hamburgers (21 Lincoln Square, Hodgenville). Of course, when he makes a statement like that, it means it’s go-time.

Laha’s was only about an hour and a half from where we were staying, so it was our first day’s stop. There were eight counter seats inside; lucky for us, they were all empty. However, it will get crazy around lunchtime.

I take a seat, and instead of waiting for my wife Marcela and my bud John, I order myself the double cheese dipped burger with some onion rings and a chili dog with onions.

The dog isn’t so much a chili dog as a wiener living in a chili bath. So I drizzle some yellow mustard on this tasty little ditty for good measure.

Laha’s Red Castle has been open & serving up hamburgers since 1934, so you know something special is about to happen.

Here’s some information that can be useful to first-timers. First, the dipped portion of the burger refers to one bun being infused with some of their homemade chili.

While you order a double, it does not mean that there are two patties. The burger is made up of two meat portions smashed into each other during cooking.

An expert burger griddle cook can only achieve the meat’s beautiful crust.

When you mix the chili sauced bun, onions, cheese, and mustard into the equation, you have a big-time winner on your hands.

Laha’s Red Castle makes an old-fashioned burger. But unfortunately, most burgers are no longer made with this kind of care.

Marcela chose to have lettuce & tomato, which I think pretty much kills what makes this burger so unique. She likes to eat her burgers with all this filler, a never-ending torment for me.

I ate another single cheeseburger for dessert while she finished hers—the only honorable thing to do in this case.