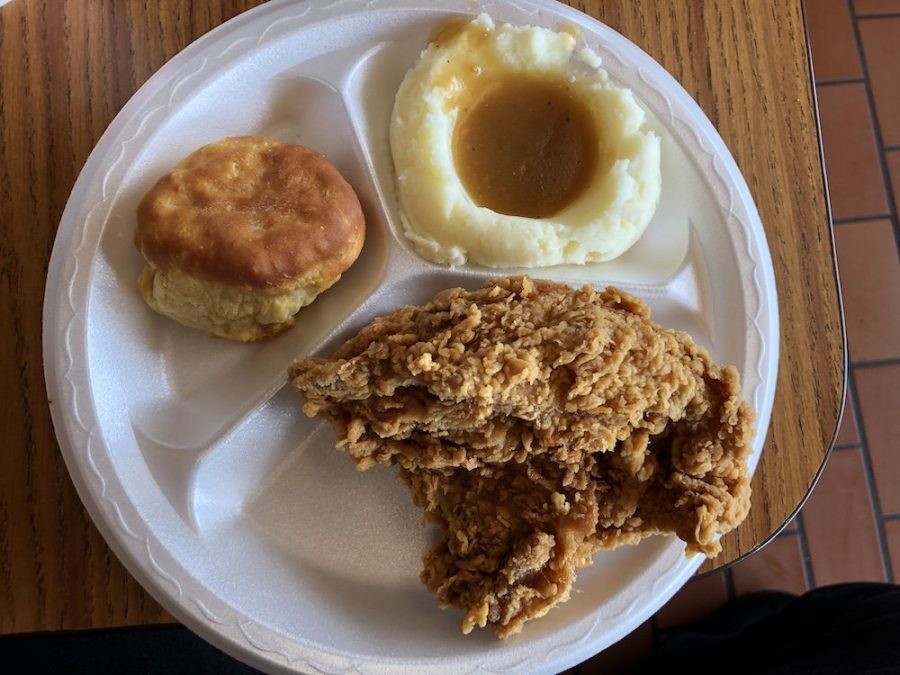 I was familiar with Lee’s Famous Recipe Chicken and its history but I had never driven past one on any of my travels.

Then, I saw it at a distance. My wife Marcela was driving and I went into unbearable child mode to let her know that we needed to pull in and eat some fried chicken.

In 1952, when Colonel Sanders (KFC) was traveling around the U.S. selling pressure cookers and his secret recipe blend of 11 herbs and spices to restaurants, his nephew Lee Cummings was his travel companion.

This was before there were even any Kentucky Fried Chicken Restaurants. Lee would be later the president of KFC operations.

When the Colonel sold his company to John Y. Brown in 1962, Lee would begin working on his own fried chicken recipe.

Lee partnered with brother-in-law Harold Omer to open Harold’s Take-Home in the back of a Pure Oil Station in Lima, Ohio. The new fried chicken made its debut there in 1966. The original three-piece box with mashed potatoes with gravy, coleslaw, and a biscuit was the most popular option during Lee’s opening.

The original location would gross $200,400 in the first year, and before the end of the year, they had opened their first franchise in Columbus, Ohio.

After a 1968 lawsuit by Kentucky Fried Chicken, Lee’s changed some of the processes used in cooking the chicken, and the use of tarragon in their coleslaw amongst a few other minor things.

Shoney’s bought the company in 1981. Its ownership has changed hands a few more times after that.

A VISIT TO LEE’S

Lee’s chicken is pressure cooked to seal in its special blend of herbs and spices. It’s also honey-dipped and hand-breaded so in other words, they’re doing it right.

The spicy chicken is hand-breaded twice with a little bit of kick. I’m pretty sure most folks should be able to handle it. Unless you’re like my Mom, who thinks pepper is spicy.

I ate the chicken breast which was moist and crispy. The mashed potatoes with gravy and the biscuit hit the spot, no complaints here.