Mi Rinconcito Mexicano (1961 SW 8th St, Little Havana) was just a tiny spot across the street from where it’s currently located. Back then, Marcela would frequent it with a friend of hers then bring me a tasty Mexican Coke, one of the few spots in Miami that sold it back then.

When they moved into their new digs across the street, I mustered up the courage to visit. I can get a bit claustrophobic when it comes to restaurants sometimes. They would again expand one last time by overtaking the space next door and adding La Migaja Mexican Bakery.

If you want to have a real Mexican food experience, this is the spot for you. Sure, a handful of taco joints in Homestead are great, but it does not get better for a full restaurant experience than this.

Mi Rinconcito Mexicano & La Migaja Should Be In Your Restaurant Rotation

May 16th, 2014 – It’s been well over 5 years since I posted anything on the Burger Beast blog about my favorite Mexican place, Mi Rinconcito Mexicano in Little Havana. Marcela’s Mexican-born friend swears by the food here, and well, so do we.

We eat here at least once a month. I’ve never had a bad meal in the over 100 times I’ve visited. Mi Rinconcito Mexicano is the SHIT for lack of a better word and/or my limited vocabulary.

I’m not about to bore you with what this dish is and what that dish is; you can check out Wikipedia for that. I don’t eat tacos here, but they’re still delicious. Jacalito is my spot for tacos, in case you were wondering.

If it’s the weekend, you need to order a tamale. They’re only available in limited quantities, and by early afternoon they’re sold out. Most importantly, if cochinita pibil is on the daily specials board, go ahead and order that beauty.

If you’re a first-timer, Combinacion #2 is the dish to get and share, or you can hog it up by yourself. After that, it’s up to you. It’s got a great variety of what Mi Rinconcito Mexicano is about.

In the back of Mi Rinconcito Mexicano is La Migaja Mexican Bakery. You might overlook its existence, but there is no way you can ignore the intoxicating smells emanating from there.

During the Mexican holiday El Dia de los Muertos, they serve up sugar skulls, Pan de Muerto, and all that good jazz.

If they’ve got the pan de elote (corn pie), then it’s a must, and it goes perfectly with coffee. But, I’ll be honest; everything is pretty good. I always take something to go from La Migaja, always.

February 3rd, 2009 – I was hesitant to go to Mi Rinconcito Mexicano (1961 SW 8th Street, Little Havana) when Marcela first told me about it. She told me what the place was like, and from her description, I imagine it being like one of the bars in a Robert Rodriguez western.

After actually stepping foot into this place, I can tell you it’s more like a Mexican Morro Castle. Since then, I’ve been there quite a few times. As soon as you arrive, you’ll be served some tortillas chips with salsa (hopefully, sometimes the waitresses forget you’re there).

These are not those cheap chips you get at chain restaurants. Instead, the chips from Mi Ronconcito Mexicano are thick, freshly made, and most importantly, come with a side of spicy homemade salsa. I also like the fact I can get Coke in a large glass bottle here.

Marcela is a big fan of their chilaquiles. What exactly are chilaquiles? Well, I’ll give a shot at explaining what they are; they’re tortilla chips which have been cooked with either salsa verde or roja (green or red, green is spicy, the red is milder), which makes them moist. They are topped with crema (sour cream) and served with a side of refried beans and scrambled eggs (actually, however, you want the eggs cooked). You can also add beef or chicken to the equation.

If you’ve never tried real-deal Mexican food, then you don’t know what you’re missing out on. I haven’t even begun to cover the number of dishes on the menu. Recently, the restaurant expanded by adding more tables and a baked goods area.

Plus, there’s some dude who walks around with a guitar on weekends belting out tunes. Oh yeah, and since I referenced Robert Rodriguez earlier, there is no cochinita pibil on the menu before anyone asks. 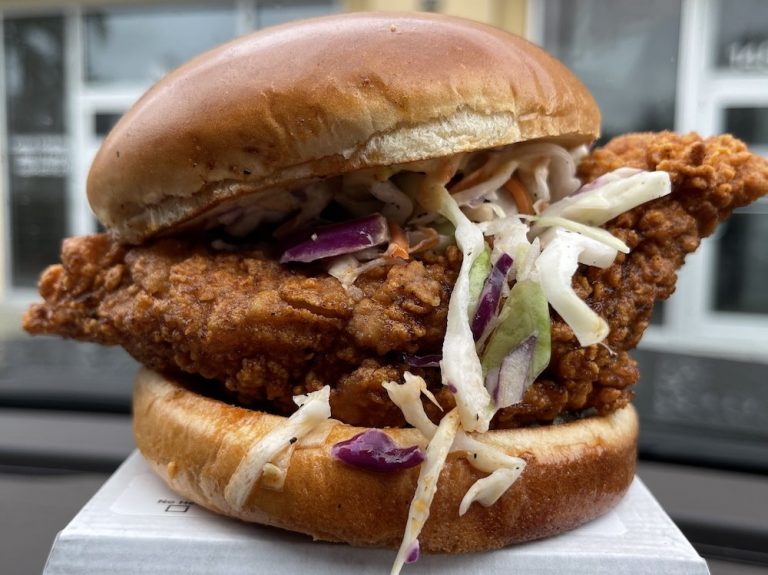