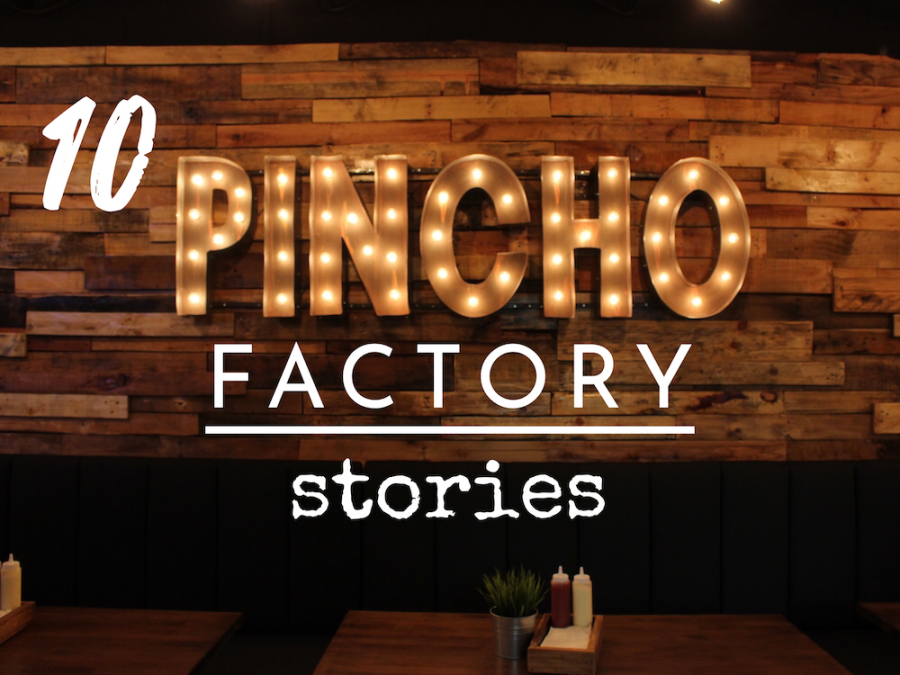 I was vocal about my love for Pincho Factory or PINCHO, as it is now known since my first visit. There was something different about the vibe there, but I couldn’t quite pinpoint it. Less than a week after their grand opening on November 6th, 2010, I waltzed in. A mutual friend suggested that I try this new spot that had burgers on the menu in Westchester (my hometown) and was called Pincho Factory? There still are pinchos on the menu, but I like to think my influence made them a burger joint.

Over the course of the following year, I witnessed as a bunch of crazy creations were made and added to the menu: Arepa Burger, Buffalo Bleu Burger, Double Decker Goober Burger, Elvis Burger, The Foreman, Frita Egg Roll, Furious Texan, Mashed Potato Burger, That’s What She Said, and $2 Tuesdays (Meatballs, Mini Fritas, Osso Bucco Wing, and ROM Slider).

If you were watching from the outside, it might have seemed like an overnight success. It wasn’t until the birth of their now-famous Toston Burger (and its appearance on Travel Channel’s Burger Land) that Pincho Factory seemed to be finally on a rocket-ship to success.

Then, it happened. Pincho Factory won the 2015 South Beach Wine & Food Festival Burger Bash, something unthinkable. It just never seemed possible that anyone could overcome the number of votes that the celebrity-driven restaurants would get—the little restaurant from Westchester that could did.

It was a great moment for everyone in South Florida to know they had reached the pinnacle of the burger game. Unbelievably, they would repeat the feat four years later at the 2019 Burger Bash. Shortly after that, they won my Hamburger House Party, where they had competed for six consecutive years; 2019 was their year.

Now, here we are 10 years later, and they’ve got many restaurants all over South Florida. So awesome.

10 Years of PINCHO Table of Contents

The founders of Pincho Factory were brothers Nedal & Nizar along with their cousin Otto. Nedal’s wife, Kristel, was also an integral part of their early days. Adrian would join the gang a few years later, and he’s now the Directory of Culinary for them.

Now, before you start reading these great stories about PINCHO, please keep in mind that I’m friends with these guys. If you know me, then you know that I love to bust chops, and that’s how we’re really going to celebrate ten years of PINCHO.

Right around the same time that I discovered a fake Burger Beast, my buds at PINCHO found their copycat. I’m still not sure what’s more ridiculous, the Burger Beast from Ecuador or the Pincho Factory Grill out of a car trunk from Guatemala? At least my faker was well branded with kids’ meals.

Nightmare on the Burger BEASTmobile

In early 2011, I announced the arrival of my food truck, the Burger BEASTmobile. I asked the then-unknown Pincho Factory to cook out of it at the uber-popular Lexus of Kendall truck event on January 28th, 2011. Just a few short hours before the event, Lexus requested that all trucks must have their company name added to the truck’s liability insurance.

I was stressed at the possibility that this fledgling little business was about to be stuck with a bunch of food. My dad went ahead with the truck to be there in time for the event set-up. We were on the phone with the insurance company right up until the last minute, trying to get it done.

The event went on to be a giant success for them. However, they did buy enough deep-fried cheesecakes to last them for the next two years, aka they didn’t sell many.

Once they won their first Burger Bash I noticed that my awards were getting the second class citizen treatment. Hear me out, I’m walking to the restroom at the Coral Gables restaurant when I discover my Burgie Awards featured on a little shelf right next to the restrooms. I thought to myself, these fuckers are going to regret this. They received many years of torment from me about it.

Just when I had gotten over the previous slight, they lovingly have artist Coinslot include me in the Westchester mural at their original spot. Nice of them, right? Sure, great until I realized I was sharing the space with the thermostat. Maybe these cabrones wanted to let everyone know how cool I am.

At my 2015 Burgie Awards, an odd thing happened, apparently inspired by that douche Kanye West. When OTC won the Best Non-Traditional Burger awards, Otto made his way up the stairs and then to the stage. PINCHO had won this award the previous three years. I didn’t think much of it at first since I knew he was friends with Michael, OTC’s owner. He grabbed the microphone, then appeared to have a change of heart about whatever his original plans and congratulated OTC instead. The picture with Otto, Michael, Evan (the Miami Herald editor at the time), and I captured the moment perfectly.

Nedal offering me banana peppers, onions & Ketchup on my hot dogs after telling me he was from Chicago. I’m pretty sure that ketchup on a hot dog in Chicago is illegal. During that time, whenever someone asked me about Pincho Factory, I told them to ask for Nedal and request ketchup on his hot dog. He got the idea then that I wasn’t going to let that one go. Guess what? 10 years later, I’m still talking about it!

The Hot Dog is a Vienna dog. Just in case you live under a hot dog rock, this is the good stuff. The dude at the counter suggested I add banana peppers, onions…..and ketchup. Is he crazy? I didn’t add it, but he assured me that it tasted great that way. If you try it that way, let me know, I’d be interested in hearing what you think. I added mustard to it instead after the picture was taken and was very happy with it.

An excerpt from my original post on Pincho Factory, November 12th, 2010

It was a big deal when Pincho Factory expanded into Broward county. At their friends & family event, all of the employees could invite their immediate family. 99% of them invited one or two relatives or close friends except for this one scoundrel. I’m pretty sure she invited all of her family within a 20-mile radius of the restaurant. I was seated right across and could not believe the nerve. They even tried to take my wife’s chair from my table when she went to the restroom.

You could not fit one more dish on the table. These folks went to town eating everything in sight. Otto walked over to thank them for coming after their meal, and this is really the one that floored me; they asked him for some more food to go. Otto was so gracious, and I was ready to ask my wife to get up from her chair so that I could throw it at them. Some people.

On the same day (June 20th, 2013), Instagram introduced video content to their app Pincho Factory added a Frita EggRoll special to their menu. I remember the day because I posted a video of my drive from Munchies on Bird Road to Pincho Factory to try out their new dish. After ordering and sitting in my usual seat, I looked up at their specials chalkboard. After reading it a couple of times and laughing, I noticed a big problem. Whoever wrote up the special on the board also wrote all of the instructions and the notes from Nedal on how to plate it.

After snapping a pic, I complained to Nedal (who wasn’t there at the moment) that my eggroll wasn’t plated properly. He wondered how I could know that. So I sent him a picture of the chalkboard, and then there was silence on the other end of the phone. The next thing I knew, he drove to the restaurant to see it with his own eyes. Right now, I’m laughing thinking about it.

I know what you’re thinking, where is the picture? I searched but could not find it, unfortunately.

I’m pretty sure his name is Nedal, but I mean, if the Miami Herald called him Nebal, who am I to argue? I’ve heard his name mispronounced more than I’d like to remember. When Pincho Factory celebrated its fifth anniversary, I thought I could make him laugh about it again. I was asked to create a burger, which I named the Cousin Otho burger, where I spell Otto’s name wrong instead. We all thought it was funny. Then the marketing company corrected the spelling for the press release and fucked my shit up. Oh well, it was worth a try!

To this day, we will randomly call him Nebal. Good thing he can still laugh about it.

Apparently, I’m not his favorite

Nebal had asked me to invite Fatgirl Hedonist (Cari Garcia) to dinner at the newest Pincho Factory in Coral Gables. At this point in her blogging & social media career, she was doing a good job of hiding in the shadows. Cari and I had hit it off back then and are still good friends to this day. While I’m in mid conversation with her Otho comes out of nowhere and just blurts out that FGH is his favorite blogger. The first thing she does is look at me. Then Otho looks at me with an “Uh Oh” look on his face, but I was already staring at him. After shaking my head, I started laughing. It was ok; she is still my favorite blogger too. However, every once in a while, when Otho calls me, I tell him that I think he called the wrong blogger.

Burning my mouth during Burger Land

My national television debut on Burger Land also happened to be Pincho Factory’s national tv debut too. George Motz asked me if I knew of any restaurant in Miami doing something very unique with burgers. Pincho’s Toston Burger fit the bill perfectly.

When filming the show’s actual segment, we were required to eat Toston Burgers on camera and then have a brief conversation with Nebal. George’s burger was perfect, but something was off with mine, so it had to be remade. George’s had some time to cool off, but mine did not. We were filming, so there was no time to scream that the skin on the inside of my mouth was no more. It was so bad. Those freakin’ plantains scorched my mouth, but as they say in the biz, the show must go on. To this day, I have never eaten another Toston Burger.

I was in the midst of putting together my Burger Museum when someone offered me a McDonald’s courtesy card signed by McDonald’s founder Ray Kroc. It entitled the owner of the card to a free meal every time you went to McDonald’s. I told Nebal I thought it might be cool if they did a black card similar to that. He liked the idea but never said anything else about it.

A couple of weeks later, I see my friend and fellow blogger the Food-E (Nick Peña) post how he was the recipient of Pincho Factory’s first Black Card. My initial thought was, no, they didn’t. But they really had. I was able to get Otho on the phone to ask him about the card, and he mentioned that Nebal had “thought up” the idea. I screamed; WHAT! I even discussed it when I was on Nick’s podcast.

This one I’m still holding against them. Know why? They have a new Black Card, and guess who doesn’t have one? That’s right, me.