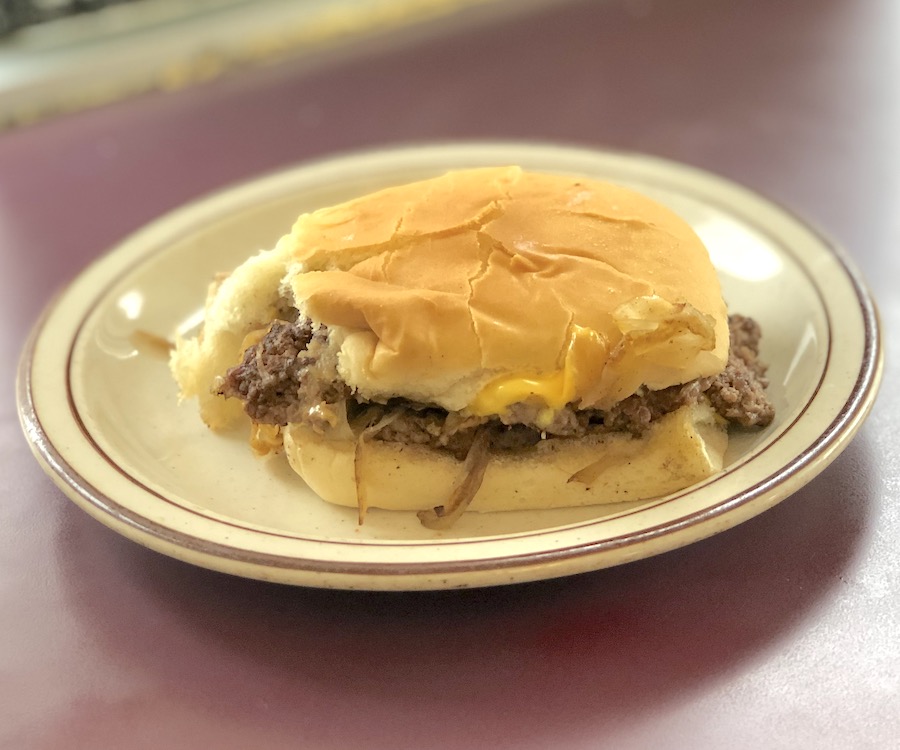 Powers Hamburgers’ downtown Fort Wayne location has stood the test of time. Since 1940, they’ve been serving up their onion burgers out of a tiny little grill that works overtime.

There aren’t many seats since the inside of the building is not very big. You probably should snatch up one of the stools near the grill; it’s where all the hamburger action happens.

She ain’t havin’ Burgers this Early

Marcela likes burgers, but nowhere near my level of obsession. She was not about to eat a slider at 10 AM, no matter what I told her.

Instead, she has some eggs with bacon, hash browns, and toast. Now, she’s content. Her happiness opens up the door for my order of a double slider with cheese and a coney dog. I regret not having a small chili, but I can’t win them all.

While the double cheeseburger is sizzling, a mesmerizing grilled onion smell envelopes Powers Hamburgers; more on that later. Then, finally, my beauty of a coney dog with chopped onions arrives, and after some yellow mustard, it’s complete.

It was the right appetizer for my double cheeseburger main course.

Just as I had envisioned in my head years ago when I first read about Powers Hamburgers in Hamburger America, the Powers double cheeseburger was excellent. The only thing was that sitting at the counter had its drawbacks.

I smelled like a Powers hamburger for the rest of the day. But, of course, it might not have been that bad if we weren’t on the way to Henry’s Hamburger in Benton, Michigan.