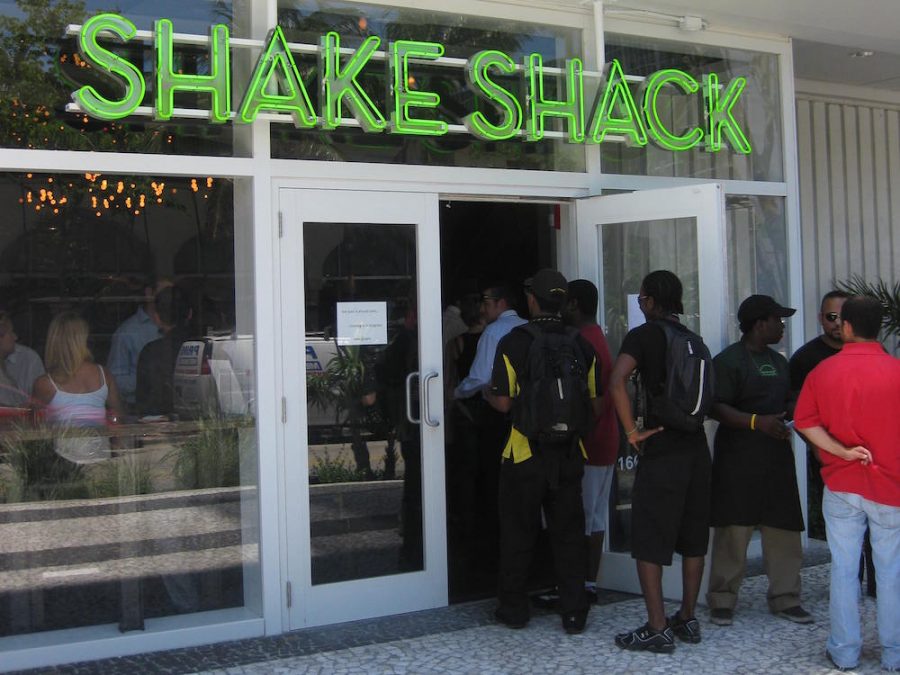 My first interaction with Shake Shack was at the 2009 Burger Bash at the South Beach Wine & Food Festival. Shack fever was in full bloom in New York, and I was ecstatic that I would be able to try their signature burger in South Florida. And then I had it and thought, what’s the fuss all about? I didn’t get it.

The following year at the 2010 Burger Bash, they were back, plus they were also 6 months away from opening their 2nd location (South Beach). But this time, when I tried it, it was different. I immediately got back in line and got a second Shack Burger…..

Kids……And that’s the story of my love affair with the Shack Burger.

If you’re a first-timer, I suggest you try out the single ShackBurger, cheese fries, and the Key Lime Pie oh My Concrete. It’s a good solid introduction to what they do best. I prefer their fresh-squeezed lemonade over a soft drink. If you’re going to go the hot dog route, then do the regular one with their cheese sauce.

Some folks love Shack Shack, and some don’t find anything special about it. To the latter, I say, “Better for me!” There will be fewer people in the drive-thru line when I’m getting my food.

There are four Shake Shack restaurants near me; to see a list of locations, go here.

Yes, that’s the original Shake Shack Hot Dog Cart, which they wheeled out every summer between 2001 through 2003 in New York City’s Madison Square Park. In 2004, the actual Shake Shack stand opened, and then the mania ensued. Until Shake Shack posted this picture, I was beginning to think that there never was a cart or that they were trying to give themselves some street cred.

Oh well, I was wrong. And who needs street creed when you have the Shack Burger anyways?

The Shake Shack menu has expanded over the years to include all the tasty fellows listed below.

If you care for someone, you keep close tabs on what they’re up to. I was aware that Shake Shack had a bacon-topped burger at one of their locations in NYC, and I was wondering if it would ever make its way down here.  I asked and asked, and then at Burger Bash (February 2012), Shake Shack served up the SmokeShack Burger (American cheese, applewood smoked bacon, cherry pepper relish & ShackSauce) to the thousands in attendance.

Then, I was finally able to get my grubby hands on it and was (and still am) ecstatic over it. Those of you who missed it can finally rest easy as it’s finally on the menu at the SoBe Shake Shack!

A Vienna dog dipped in their corn batter and fried up as all good corn dogs are. It’s served with Rick’s Picks Sweet Corn Relish

Currywurst
Our spin on the Oktoberfest classic; served on a toasted potato roll and topped with crispy ShackMeister Ale marinated shallots and curry ketchup

Bavarian Brat
For the purist; a griddled bratwurst topped with Dusseldorf mustard

Shake Shack launched two food trucks in late February of 2019. One of the mobile vending vehicles is located in the greater tri-state area (NY, NJ, CT + PA) and the other in the Atlanta metro area. The food truck can be booked for events or private parties.

We’re going way back here to early 2011. To my knowledge, the first time Shake Shack made a food truck appearance was on my Burger BEASTmobile. At the time, I was co-hosting a series of food truck events for the Miami Herald, Street Food Fridays.

Many folks don’t even know or remember that I owned a food truck once upon a time. Shake Shack did a pop-up on my truck on the Friday, February 11th, 2011 edition of Street Food Fridays. Many happy folks came out for lunch that afternoon at the Adrienne Arsht Center.

You’ll notice that the fries and concretes got little to no mention in this post. It’s not because I dislike them but because my main focus at Shake Shack is the burgers and chicken. Sometimes, I’m too stuffed to eat anything else but that cheese sauce though, damn it’s good.