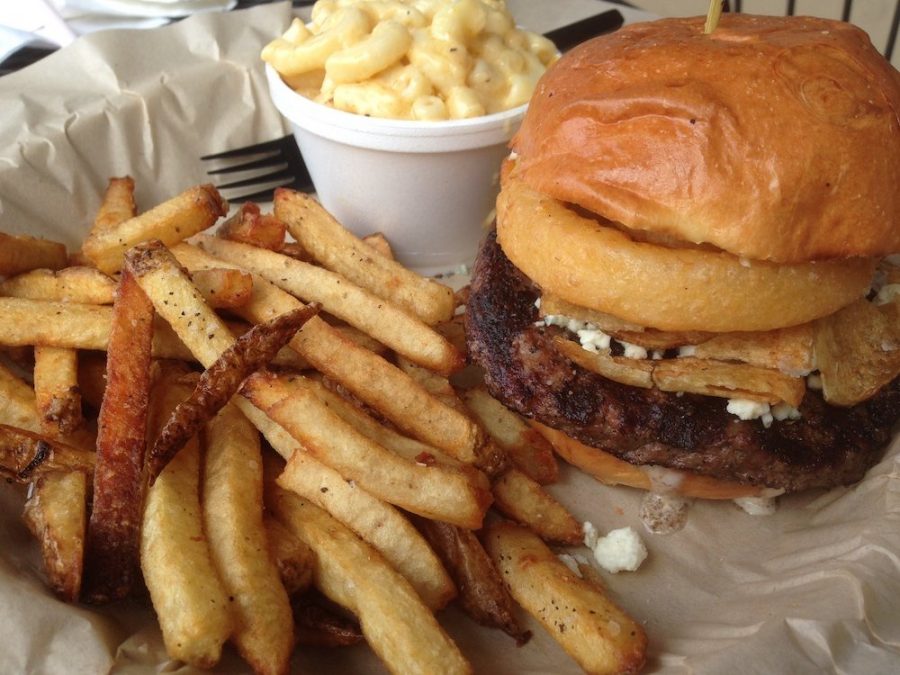 I arrived at That One Spot Eatery (10968 West Colonial Drive) just a few minutes before opening time. My friend Droolius, who was meeting me here for an early lunch, was running late as usual.

I warned him that I wasn’t about to wait for him, so I walked in and placed my order when the doors opened. After a few internal battles, I settled on the B.B. Burger with the mac with corn, hand-cut french fries, and onion rings as sides.

I stood there watching as my mac & cheese was being prepared. There was an ingredient I’ve never seen in any mac n’ cheese I’ve eaten before, corn.

It turns out that one of the founders of That One Spot, his grandmother, was raised on a corn farm. She added corn to pretty much every dish she ate, including the mac & cheese she would make for him.

I was pretty excited to dig into this and so glad it delivered—what a great idea. I can’t believe I had never heard of it before. It’s a must-try.

The B.B. Burger is topped with caramelized onions, brisket, bacon, cheddar cheese, and a horseradish sauce. It was a spectacular burger. I usually go for the regular burger with cheese only before making the jump into a specialty burger.

Something about this one was calling me, and it wasn’t just the initials.

The smokey brisket & bacon with the creamy horseradish sauce on the cheeseburger were a great marriage of flavors. The burger was exceptional, even without all the dressing.

The hand-cut fries and onion rings were up next. The four dipping sauces for the sides: curry mayo, garlic aioli, balsamic ketchup, and That One sauce.

The excellent hand-cut fries came with some in-house seasoning blend on them. They were good to go and didn’t need a dipping sauce.

The onion rings were the standard type of fellows, perfect for the curry mayo and garlic aioli sauces.

Droolius shows up as I’m going back and forth between all the dishes on my table. The mac & cheese still had me mesmerized when he drops a bombshell on me, “You should have added bacon to it.”

I was probably halfway through my regular mac when I finally give in and make the 30 foot walk to the counter. I ask for another mac & cheese, this time with bacon.

It turns out fresh jalapeños are also an option for the mac & cheese. Sold!

That One Spot Menu

That One Spot Food Pictures