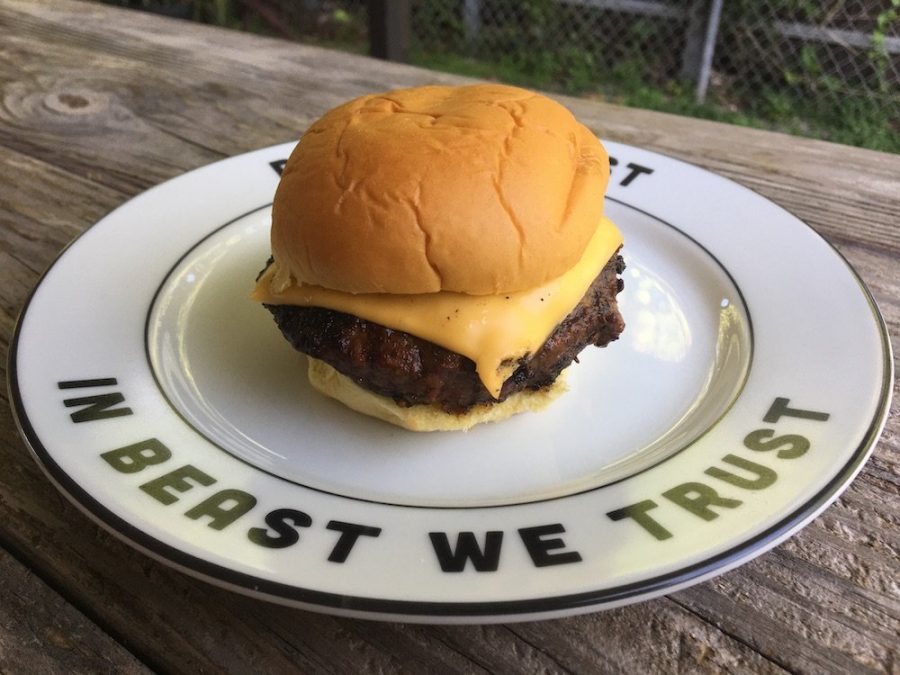 Chef Bobby “The Butcher” Marcotte and I have two friends, Chef Richard Hales and the late Carl “The Cuban” Ruiz.

Bobby Marcotte has made appearances on three episodes of Diner’s Drive-ins and Dives and four episodes of Guy’s Grocery Games because of his chef work on the Tuckaway Tavern & Butchery (58 NH-27) in Raymond, New Hampshire. In case you’re keeping tabs, he’s a two-time champ on Guys’ Grocery Games.

We kindled a friendship during the pandemic via DMs on Instagram. I looked into what he was doing, and the more I saw, the more I dug it. My parents were familiar with him since they watched Triple G religiously.

My excitement for Tuckaway Tavern & Butchery eventually led to its addition to my Burger Bucket List.

It will be a bit before I head out on another road trip. So, unfortunately, a physical visit to the Tuckaway is out of the question. But they do ship plenty of meats.

So after perusing the Tuckin’ Good portion of their site, I chose the Butcha’s Breakfast Box and the OG Burger Box.

The idea behind the Butcha’s Breakfast Box is to cook up everything included. Then, all you need to do is add eggs, coffee, juice, or your preferred morning drink. Then you’ll be good to go.

It’s meant for two separate breakfasts feeding a family of four. The box will set you back $75 plus overnight shipping.

They ain’t kidding when they say the country ham steak is thick cut. Two of these come per order, and I’m optimistic you’ll be saving some for a great ham and cheese sandwich later in the day.

The bacon left an intoxicating smokey aroma in my kitchen. I considered dragging a sleeping bag there to spend the night; nothing like dreaming of bacon goodness.

The winner of the box, which came out of left field, was the maple blueberry breakfast sausages. Damn, they were freakin’ good.

I have not made the Flapjack Mix or tried the Maple Syrup yet, but I will update this page once I do.

The OG Burger Box is the real motivator of my beef-citement. I’d seen the butcher shop online and knew my meaty mitts needed to hold one of these puppies.

The box brings six 10 oz fresh ground Black-Hide Angus Beef burgers with their house seasoning. These Famous Tavern Burgers were excellent when I made them, but I imagine these beauties being next level when you’re devouring them in their restaurant.

It will set you back $65 plus overnight shipping.

A Gift from Bobby the Butcher

After receiving an email letting me know that my boxes were shipping soon, I texted Bobby to let him know I had set Saturday aside for a grilling session with my wife Marcela and my parents.

To my surprise, when the boxes arrived, he had included some extras like the Bacon Cheddar Burgers, Black + Blue Burgers, and Apple Bacon, Chicken Parm Chicken & Our Little Italy Pork Sausages.

I did not snap any pictures of the cooked food, but you can see them in their full glory below. The Bacon Cheddar Burgers were the favorites at my parent’s house.

But, and there is almost always a but when there is bacon, cheese & onions mixed into the ground beef. So this “burger” was veering dangerously into meatloaf terrain. Luckily I love meatloaf too!

However, I will have to take this meat patty to the National Burger Council for further discussion.

The sausage race was a little closer, with the Apple Bacon winning sausage of the night at the BEAST household. We ate them on rolls with some grain mustard; it’s all they needed.

Onions and peppers on those beauties wouldn’t have hurt either.

Make Sure To Watch This Tuckaway Tavern Video

I hope this video and the pictures of the food opened up your appetites.