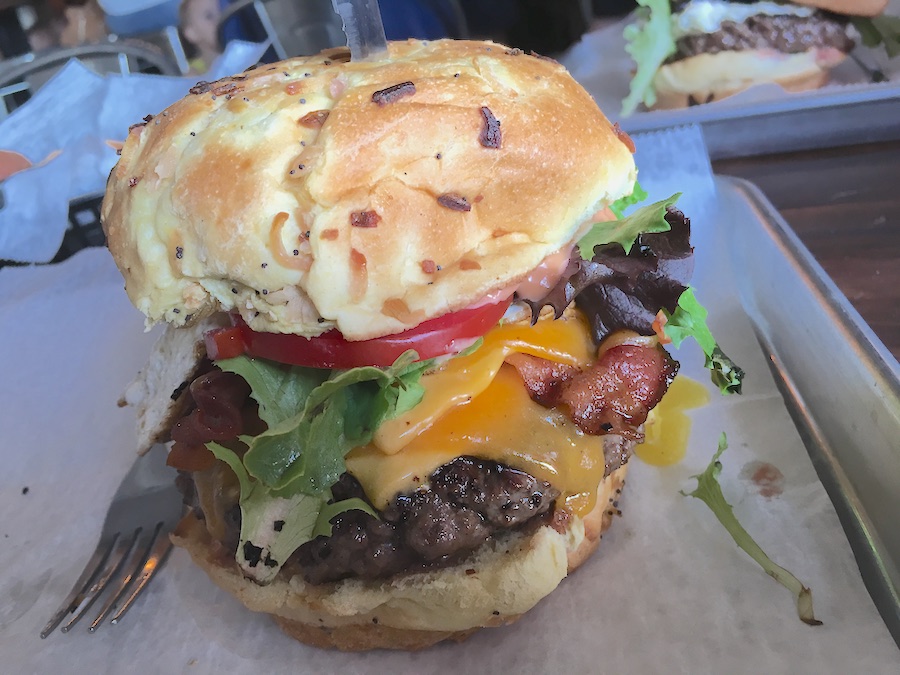 You may have heard of Tucker Duke’s Lunchbox (1658 N Federal Highway, Boca Raton) before if you’re from Pensacola, where they originally hail from with a restaurant and food truck. So when they showed up on the Burger Beast radar in 2014, I had already been eagerly awaiting their arrival.

Once I visited their first South Florida location (1101 S. Powerline Road, Deerfield Beach), it didn’t disappoint. I was by myself on my first meal there and a little overwhelmed since I wanted to try much more than I could eat.

And then she came out, the Tucker Duke burger. So I took a couple of deep breaths and went for it.

The first thing I noticed was the crunchy bun. Then I realized there were onions with their house-made ketchup on the bottom, which I’m usually dead set against (the ketchup, not the onions).

Some of the Tucker sauce was on the top bun too. The burger’s temp was to my liking, and to be perfectly frank, it was freakin’ great. After three bites, I took a break to snack on the jalapeño bacon mac & cheese.

They’ve Got Great Sides Too!

The jalapeño bacon mac & cheese is just one of many sides you can choose for your burger. Unfortunately, the rebels at Tucker Duke’s Lunchbox had a ban on french fries when they first opened in South Florida.

Initially, there were tots, chips, mashed potatoes, and even sweet potato fries as a side dish, but regular fries, nope! My jalapeno mac & cheese was delicious but not spicy at all.

Please don’t make the mistake I made; bring a couple of folks with you so you can try a bunch of things. The portabello fries and food truck egg rolls will now always have my name written all over them.

Tucker Duke’s is a Palm Beach county entity. In addition to the Deerfield Beach location, they have a restaurant in Boca Raton and a food truck.

One last thing, the Deerfield Beach location has a weekend brunch.

Tucker Duke’s has participated in many of my Burger Beast Feasts. Chef Brian Cartenuto was on Fox 29 just before the 2014 Burger Beast Burger Brawl to talk about his burgers.