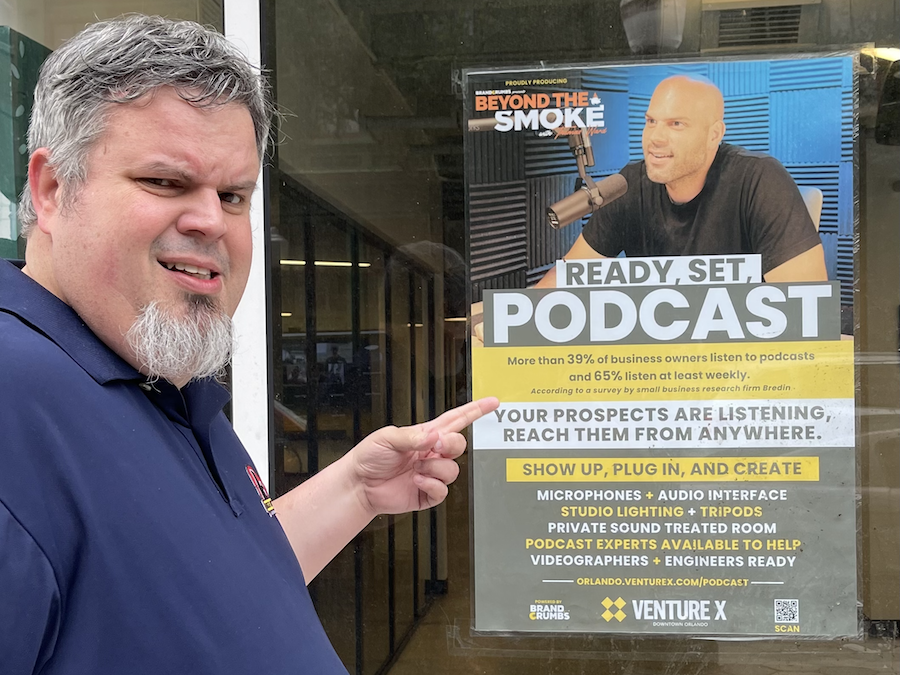 I’ve been friends with Thomas Ward since Orlando’s second food truck on May 1st, 2011. The Treehouse Truck (his food truck) had been causing a sensation in Central Florida with their Luther Burger.

When the Treehouse Truck closed for the night, Thomas offered, or should I say, pushed me to take a leftover dozen of Krispy Kreme Doughnuts. A friendship was forged that night, and a few weeks later, he brought the truck down to participate at the monthly Tobacco Road and Hard Rock Hollywood food truck events I curated.

After selling his food truck, he worked on his new concept, Pig Floyd’s Urban Barbakoa. Marcela and I love Pig Floyd’s and make a stop every time we’re in Orlando for some of his ribs and brisket.

We’ve stayed friends over the last ten years and support each other however we can. He recently created the Beyond the Smoke podcast during the pandemic, which features industry owners and more.

The episode with his dad is hands down the best one, and hopefully, the one we recorded will be up there. Yes, he invited me to be on, and I was thrilled.

So, Marcela and I left for Orlando on a Monday morning and returned Wednesday, right around 3 pm, as we tried to beat the horrible Miami traffic. Below is every stop made during those two days.

With Marcela in her world, I returned to Kappy’s Subs (501 N Orlando Avenue, Maitland) after seven years. It was only a ten-minute drive from Orange Tree.

Since 1967, Kappy’s Subs has served their cheesesteaks to the Orlando hangry. There are two beef versions available, a shredded Philly-style and chopped beef more akin to the chopped cheese that is all the hipster rage at the moment.

So I chose neither.

Instead, I went with the quarter-pound fresh beef burger with grilled onions, American cheese, and yellow mustard on a fluffy bun. The burger is delicious, but that bun was calling out for a double, so you know what you must do.

Also, points off for cutting in half, but I forgive them since I enjoyed the hamburg.

I knew that Jam Hot Chicken (400 W New England Avenue #13, Winter Park) is closed on Mondays and Tuesdays, but that didn’t stop me from driving by to take a look. This same building once housed the Sausage Shack.

Pit Stop at the house of A Lo Cubano Kitchen

Much like my relationship with Thomas, our friendship with Lisa & Yojan (owners of A Lo Cubano Kitchen) came out of mutual admiration. They’re originally from Miami, so we have that too.

L&J had not only moved into a new home but recently added a beautiful baby boy to their tribe. So we spent the afternoon and part of the night hangin’ out and, of course, ate some grub.

Donut King (208 S Hwy 27, Minneola) is another must-stops in Central Florida. We’ve been hooked since my bud Droolius introduced me to their greatness in 2012.

Marcela and Lisa picked up Donut King on the way back from Coffee Shop of Horrors.

After arriving at Coffee Shop of Horrors (17415 7th Street, Suite A, Montverde) right around 5:30 pm, it turns out that they closed at 3 pm, whoopsie.

Lisa insisted that I would love Piesano’s (1754 E Highway 50, Clermont), but I wasn’t convinced. She ordered a few pies for us to share, and Yojan and I made the drive to pick them up.

We didn’t take a peak the entire drive home. Once the pies were on the dining room table, I opened the boxes.

Both were works of pizza art.

The Spicy Sausage Ricotta Pie has the right amount of heat, crunch, and bold flavors. I’d always be ordering this one if I lived near Piesano’s.

The Pizza Antico is all about fresh mozzarella and crispy roni cup pepperoni. It’s even better than it looks.

Piesano’s has locations all over Central Florida, a few farther north in Lake City and St. Augustine.

Thanks to Lisa and Yojan, we had a blast, and hot damn, that pizza was good.

While recording the Beyond the Smoke podcast at 9 am, Marcela crossed the street for some Pattie Lou’s Donuts (139 E Pine Street, Orlando). The donuts are made to order and hand-dipped; it reminds me of Duck Donuts.

I didn’t get to try it, but she loved it.

Once we left the Brand Crumbs studio at Venture X in Downtown Orlando, we headed to Pig Floyd’s Urban Barbakoa (1326 N Mills Avenue, Orlando) for lunch.

Marcela is all about the Mexican Street Corn and Ribs; I was hyperfocused on eating the Plain Jane Sliced Brisket sando.

The Plain Jane Sliced Brisket sandwich is just that, sliced brisket on a sweet roll. It needs nothing else.

Thomas hung out with us and brought Sticky Ribs and Mexican Street Corn Fries.

Marcela forgot all about the other ribs and was mesmerized by these sticky fellas. I was picking at the Mexican Street Corn Fries and enjoying them, but I had just eaten an order of their Yuca Fries.

We stopped at Twistee Treat (6314 International Drive, Orlando) for some soft-serve ice cream on the drive back to the hotel, then checked out the new Shack Shack Drive-thru.

We park to enjoy and then realize White Castle is in the same lot and today happens to be the first anniversary of their opening in Orlando.

Guess who went through the White Castle (11595 Daryl Carter Parkway, Orlando) right after? That’s right, Marcela and I was an unwilling participant, lol.

A White Castle 1921 Slider and the new Coca-Cola Crème Soda, we were returning to the hotel so I could watch some crappy tv programs. Oh yeah, I almost forgot; you received a free White Castle mug to celebrate their one year with every purchase.

Marcela heads back to her favorite antique store Deja Vu Vintage (1210 Michigan Avenue, Winter Park), to see what’s new. There’s this cool Park City Meat Market print that I’ve been on the fence about buying; check it out.

She stops at Krispy Kreme Doughnuts (1031 S Orlando Avenue, Winter Park) for donuts and coffee. This is more for the morning when we’ll need a sugar rush to get us going.

We’re awake at 8 am and out of the hotel by 9:30 am. I make a spur-of-the-moment decision to stop at Krystal.

This Krystal (6201 W Colonial Drive, Orlando) was the closest to our route home.

We picked up some sliders, but for us, Krystal’s strong suit is their Chiks. A few for the road, and we were on our way back to Miami.

We tried to beat that Miami traffic but got caught on the Palmetto near Hialeah when we were fifteen minutes from home.

One last important note, there is no air date for the podcast episode, but I will add it as soon as it’s available to this post.