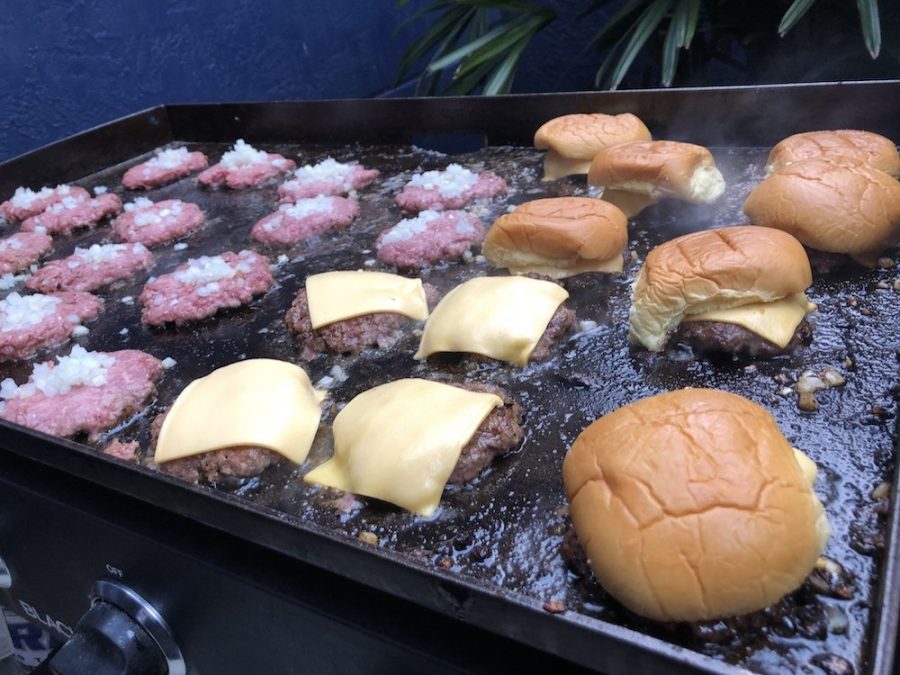 Before you start reading, I just wanted to let you know that I will be using the terms Blackstone, griddle, grill, and flattop interchangeably.

Whenever I’m not out eating road food, I’m busy attempting to master burgers on my Blackstone griddle. So I’m usually an old-school chargrill guy.

It’s been a neverending battle to simplify the process, but I’ve found that the more prepared I am, the easier it is to cook. 99% of the time, I smash burgers on the flat-top.

It should be no surprise if you follow me on Instagram and that smash burgers are my jam. And sometimes, if you get me on a good day, I might butter and toast my hamburger buns.

I’m sure you’ve heard it a million times before, but you need to get a burger blend with good fat content, and 80-20 will do. I like the 80/20 ground beef from Schweid and Sons.

Burgers on a Blackstone Griddle

Things You Will Need

**I’m listing a few things I use when smashing burgers on my Blackstone griddle.

Get This Meat Party Started Right

If you’re going for a smaller slider style, you should be looking at two ounces. My preferred burgers are double, with each patty weighing in at around 3 ounces.

You’ll want to make balls out of the beef, but don’t mess around with it, roll them, and be done. I set my Blackstone on high.

The grill must be super hot. Once that baby is going, place a few beef balls on the grill.

If you’re cooking at night like I prefer to do and don’t have great lighting, then you should be using something like the Yukon Grill Light. I use it unless you want your friends and family hovering over you with their cellphones or a flashlight.

Cuisinart’s smashed burger kit is a good starter if you don’t have any accessories yet. However, It brings what I once upon a time would have referred to as a round bacon press.

What’s important is that you use a heavy-duty meat press. Don’t have one? Use the smashing power of two weaker spatulas like I’m doing in the picture above.

That burger smasher is ideal for, you guessed it, smashing that ball into the hot flattop. It will make your life easier if you add a piece of parchment paper in between both first.

You don’t want to deal with that dreaded sticking situation that can happen with beef and shiny items.

Season & Melt Cheese on those Burgers

You’re going to want to season those flattened meat spheres. A mix of salt and pepper is excellent, or maybe you like to use seasoned salt.

I’ve always got whatever I use ready in a dredge to shake with some style. Steak seasoning also works well if you’ve never tried it before.

Once those burgers are almost ready, you will grab that spatula and flip them, babies, over. Give them about a minute and place slices of cheese on them.

American cheese is the way to go with burgers for its unique melty qualities, but try Manchego if you want to get fancy.

Now is the time to break it out if you’ve got a steaming or a cheese melting dome. Cover the smash burgers and maybe even drop some water around the perimeter to kick up some steam to speed up the process.

All that’s left now is to assemble your sandwich. Don’t cut corners at the end; always use great bread.

For example, I use Martin’s Potato Rolls. Unfortunately, they’re not available everywhere, but you can grab some from amazon.

Don’t get lazy and forget to clean up after yourself. There’s no time like the present before everything hardens on the grill.

I like to use the Cuisinart scraper to remove all the tasty residue from my Blackstone. It’s not the first scraper I’ve purchased, but I prefer the grip on this one; plus, it has a splash guard.

If you’re wondering, the sauce is a Guava Sriracha Ketchup, and it is available for purchase.

Oh, one last thing, air fryers are not the way to go for burgers.

If Cooking is your Thang