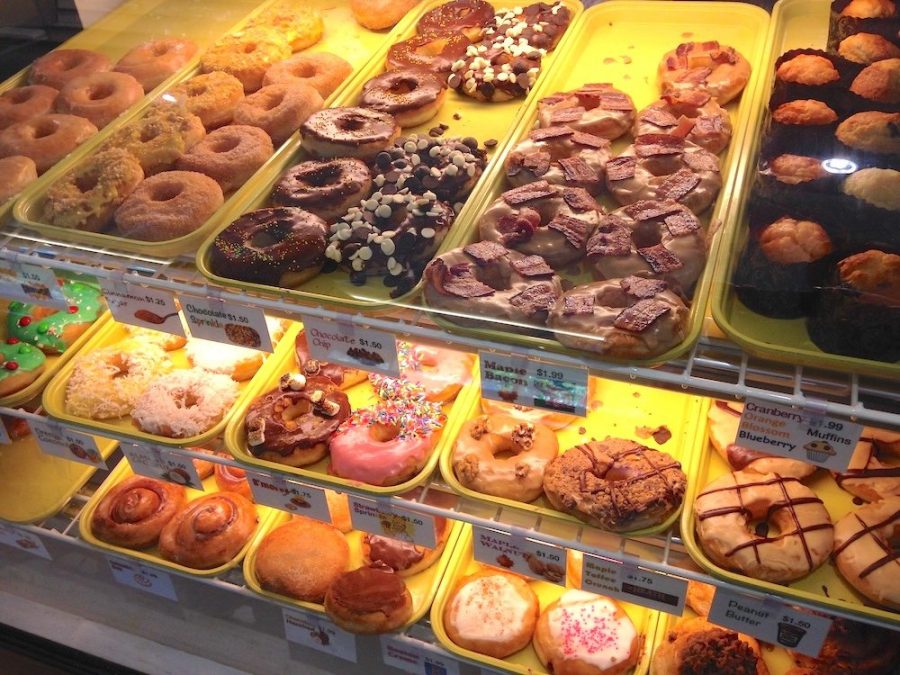 Bennett’s Fresh Roast (2011 Bayside Parkway, Fort Myers) was our third stop in our 4-hour Sanibel/Captiva food-escapade; Schnapper’s Hots & the Bubble Room were stops 1 & 2. We’re here exclusively for freshly made donuts. So we ask the only logical question, what’s the most popular doughnut at Bennett’s?

I’m pretty sure I could have guessed the Maple Bacon Donut because it was a thing of beauty with real bacon made daily, not that freeze-dried and then nuked bacon going around.

There was also a Chicken & Donut: A fresh-made Bennett’’sDonut (no icing or glaze), halved and smothered in fresh homemade chicken gravy made with fresh house-roasted and brined premium chopped chicken breast meat, cream, seasonings, and vegetables including diced carrots, green beans, and corn.

My friend Joakinn asks for a Glazed & a Boston Creme Donut while I order a Glazed, Maple Bacon, and a Maple Toffee Crunch for Marcela. We have them packed up, and I take a Glazed Donut test bite in the car on the way to our next stop.

It was a great sneak peek but did not prepare me for the Maple Bacon, which was off the charts. Marcela received the Maple Toffee Crunch (Heath Bar) Doughnut well, but the Boston Creme’s fate was less glamorous. Some ants hiding in my kitchen found it and had their way with it, those heathens.

The Bennett’s Fresh Roast location at Sanibel is closed, but you can still hit up their Fort Myers location, which is going strong.