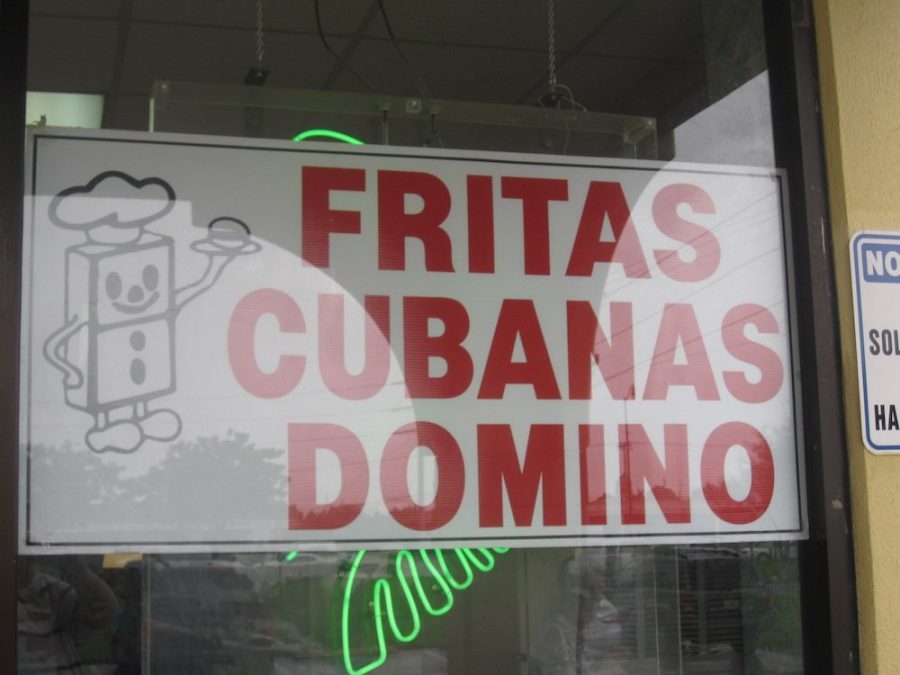 Fritas Domino La Original (936 SW 67th Avenue)has been around in one incarnation or another since 1961. It was originally on 8th Street and 12th Avenue in Little Havana. When it closed in early 1982, the same location became the legendary El Rey de las Fritas.

The decor and seating have a very 1970s skating rink feel. There are also a bunch of mismatched chairs and tables.

The oddest thing was that there was a group of older people seated a few tables away having a very Que Pasa USA? (a Miami TV show which was in Spanglish) conversation.

This one guy was speaking in perfect English while the little old lady was responding in cliche-ridden Spanish. The third fellow was just silent. They were discussing how better things were in Cuba back in the day before the revolution.

These characters wanted everyone to hear what they were discussing. I’m going to assume in the hopes that someone else would jump into the discussion.

Not me folks, I’m just here for the food!

Anyway, so I order a Frita Cubana (the Cuban Hamburger), a Perro Enrollado (hot dog wrapped in bacon), and a  Coke.

The Perro Enrollado is a great idea that I had seen in the Nitza Villapol cookbook. The hot dog itself was nothing special until you split it in half, stuff it with American cheese, & wrap it in bacon. It was served on some soft bread with ketchup layering the bottom and topped with the majestic housemade julienne potatoes

The Frita (with julienne potatoes, ketchup, and diced onions) hit the spot. I was initially disappointed that a regular hamburger roll was used instead of a Cuban roll. I got over it real quick, though.

The truth as it pertains to the roll is that when Fritas Domino first sold their Fritas in the 1960s, it was the only bun that fit the mold of what they needed.

The Frita Patty from Frita Domino does have that pronounced Spanish paprika taste. In this case, I do believe there is some Chorizo mixed in with the ground beef.

If you do make it out to Fritas Domino, don’t forget to leave some room for the churros. They come four to an order.