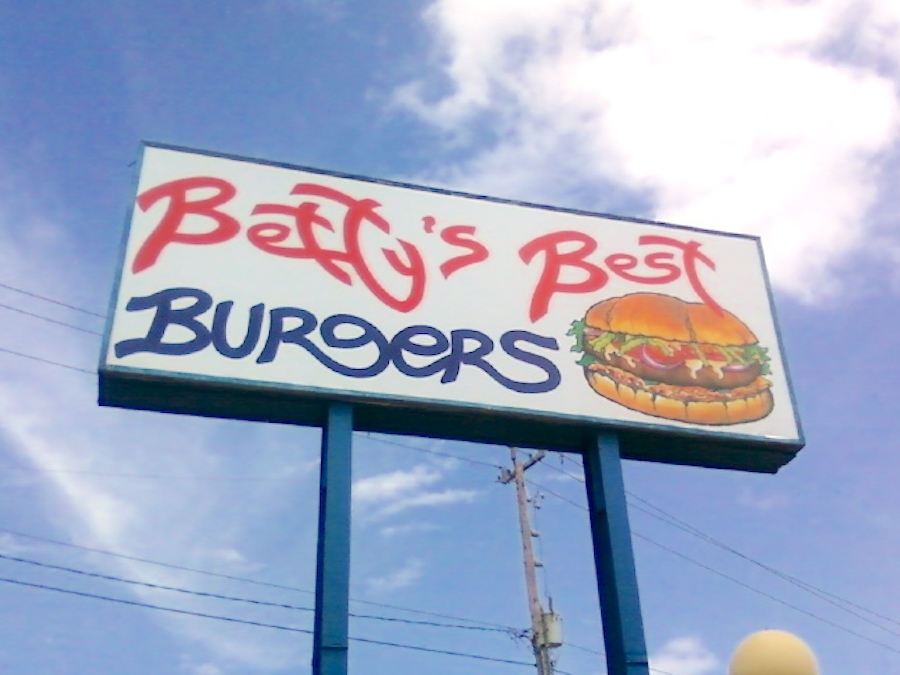 Betty’s Best Burgers opened as a Fuddruckers in 1984. Initially, there were four owners, including former Miami Dolphins legend Nick Buoniconti and Betty Amos.

Betty was the sole owner when Betty’s Best Burgers closed in the summer of 2011.

September 13th, 2008 – This spot recently changed its name to Betty’s Best Burgers (7800 SW 104th St, Miami); it was previously Amos Sports Grill and Fuddruckers. So, how is the place? How different is Betty’s from Amos or Fuddruckers, for that matter, and my answer?

As George Lopez says, “It’s the same shit, the same shit.” You must say it twice for emphasis when it’s important. So, I have started my campaign to rename this place Fakeruckers; you heard it here first.

I ordered the 1 pound burger with bacon and cheese and an order of fries. I am a big fan of Fuddruckers burgers, and I was not disappointed as usual.

If I were you, I would stick to all the fresh toppings available in the self-service area. So skip ordering the grilled onions; they don’t taste right. Instead, try the honey mustard at Betty’s Best Burgers, which is different from other Fuddruckers locations and better.

However, the seasoned wedges were great as usual. Be warned, Betty’s Best Burgers serves Pepsi. I must bring this up because I’m a Coke man.

If you love Fuddruckers, go to Betty’s Best Burgers cause it’s the same, that’s right. So let me leave you with this odd occurrence back when it was Amos Sports Grill.

They have a full bar, but there never seems to be a bartender. So, I was with a few friends, and we ordered some White Russians. The manager came over after drooling over some milfs who were one counter over buying ice cream.

He asks us what the ingredients are (his words, not mine) for a White Russian. This fella must not have seen the Big Lebowski, so he looks around, finds the Kahlua and some vodka, and can not find any half & half.

So, he gets the little half & half containers used for coffee and proceeds to make us possibly the worst White Russian I’ve ever had. True story.

Gone But NOT Forgotten