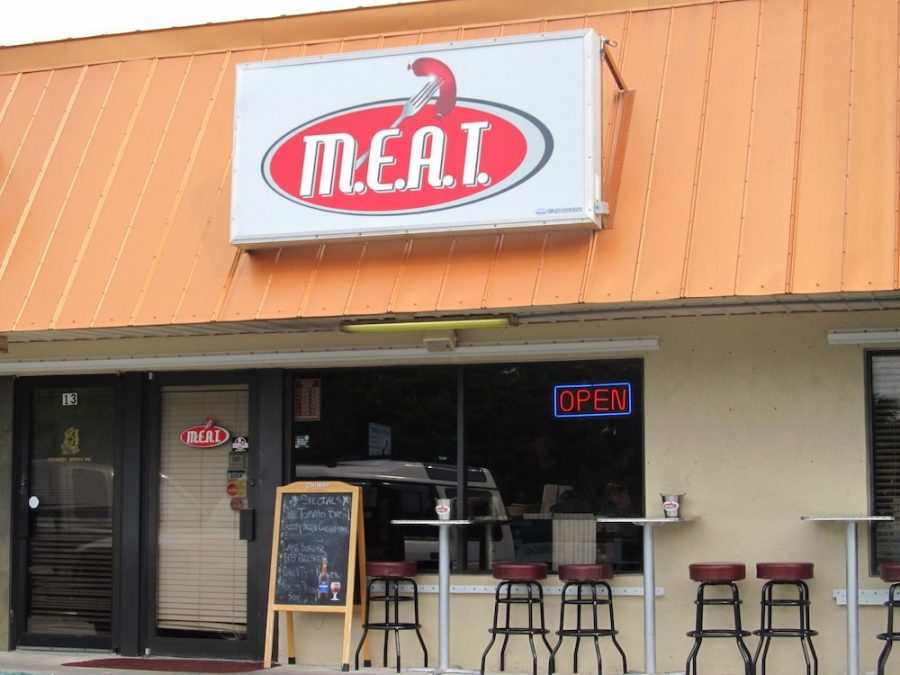 I almost passed MEAT Eatery & Taproom (88005 Overseas Hwy #15 Islamorada) while driving in from Miami. Whenever I’m in the Keys, I get in this mode with whatever music I’m listening to, and this time was no different. PJ Harvey’s Rid of Me was my drive music this time, in case you were wondering what had me mesmerized.

You can’t tell very much from the outside of the MEAT Eatery and Taproom. When I walked in, I had that feeling; you know, the one; the “this place is gonna be great” feeling. I walk to the end of the bar and sit down and start surveying my surroundings.

I notice a lack of menus to look through. Some fellow is placing an order at the register right near the entrance. There appears to be a menu in his hands. I must have overlooked something when I walked in.

Yup, there are some menus when you walk in with a sign that says essentially, figure out what you’d like to eat, and either take a seat to order or come up to the register.

I can see they’ve got over 10 Beers on draft (variety of Craft & Domestic) and even Albita Rootbeer on tap. There are no big-name soft drinks to be had either. They have their own sodas in flavors cola, diet cola, birch beer, cherry cola, and a few others. All the sodas contain no high fructose corn syrup.

I made up my mind. The housemade Pork Rinds (chicharrones), the Nancy Pants (5 oz Burger) with bacon and a microbrewed cola, plus the chorizo sandwich made the team too. The rinds were still popping when they arrived.

It sounded like a poor man’s July 4th celebration. They were crunchy, airy, and not greasy (contrary to the story the newspaper below it was telling). The lime-cilantro aioli dipping sauce was just perfect for it.

The Chorizo Patti Sandwich, as it’s called, arrived along with the Nancy Pants Burger. The word MEAT is on the top buns. The chorizo is housemade, and the Patti came topped with American cheese and their homemade mustard.

It was riveting from the moment it arrived. In color, it reminded me of the gator burger I had once. I was sold after the first bite. There was that familiar and excellent chorizo flavor in patty form. The mustard was the right condiment for it, and the choice of American cheese was also on the money.

Nancy had to keep the momentum going. She came speared with a tiny gherkin pickle on top. It was covering the rallying cry of MEAT. When both burgers arrived, I had the feeling I should scream out “MEAT” in a Braveheart kinda way, but then the feeling subsided.

This burger was a beauty. It was cooked medium as requested and was correctly seasoned. The bun was toasted, the American cheese was melted, and yeah, it was excellent. The maple-cured cherry wood smoked bacon put the proverbial cherry on this burger top.

The Duck Fat Fried French Fries were good too, but no match for those two burgers. Very honorable mention to their housemade Mango Chipotle Ketchup, which is bottle worthy.

After it was all said and done, it had been a while since I left a burger joint and said, “Wow!”. But guess what? Wow!

There is now a sister location in Boca Raton. Heads up, most dishes are available on both menus, but there are some differences.